Excellent read. The Germans, it feel destroying themselves makes them virtuous. “those whom the gods wish to destroy they first make mad” https://t.co/WuiDVKPFt0

– What’s the Matter with Germany? Merkel Leads in Polls Despite Surging German Migration:

Despite surging migration, German Chancellor Angela Merkel continues to lead in the polls ahead of elections scheduled this September.

According to figures just released by the German government’s Federal Statistical Office (Destatis), more than a fifth of the people in Germany are now either immigrants themselves or have at least one immigrant parent. Most are from other European countries, but this is rapidly changing.

Between 2014 and 2015, a record 2.14 million people moved to Germany and most (55%) were not from other EU nations. About 5-6% of Germany’s population now practices Islam, a number that has grown by more than a third since the last census in 2011. The number of people with African roots has increased even more — by 46% — and is now just under 1% of the German population.

Unless strict migrant limits are imposed, Germany’s native population faces an oncoming crisis. Migrants have higher birth rates than native Germans. And in June, Germany’s Development Minister Gerd Muller warned that up to another 100 million Africans could head north as economic and climate refugees, with many of them likely to head to Germany. That is more than Germany’s entire population of 81 million. Most of these migrants are men and almost none are fleeing war. 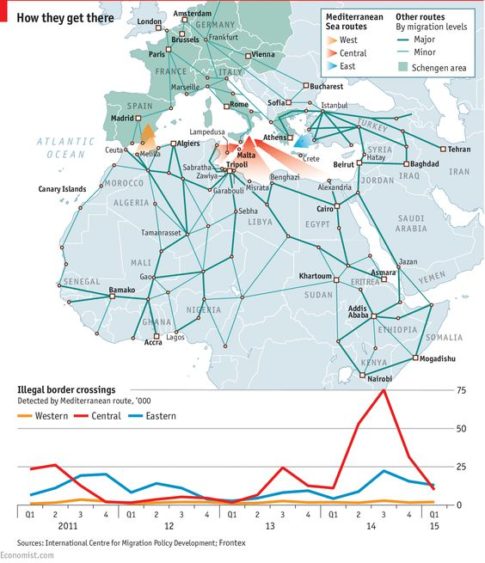 How has Germany responded? Just two weeks ago, Merkel ruled out setting an upper limit on refugees coming to Germany. “On the issue of an upper limit, my position is clear,” she said. “I won’t accept one.”

Instead, German policy is focused on transforming the migrants into ordinary Germans. In May, the government released a 15-point program for successful “cultural integration.”

These efforts will face serious challenges. Over half of German Turks, the migrants with the longest history in Germany, do not work and are not interested in a job. The nation is also facing surging anti-Semitism and rape (and not just in Cologne). In parts of Berlin, Islamists are openly enforcing Sharia law.

The German public seems to have some awareness of the problem, but not enough. A 2016 survey found that 47% favored an upper limit on the number of refugees. But Germany still lags other European nations in its sense of national identity, partly owing to its Nazi past. Those who speak out face serious consequences under German hate speech laws, while the German media has been pro-migration.

If Merkel wins this fall as expected, the situation will likely get worse. At least some Germans see this — support for German separatist movements is beginning to grow in parts of the country.

1 thought on “What’s the Matter with Germany? Merkel Leads in Polls Despite Surging German Migration”