Having dismissed the “big, fat, ugly bubble” during his campaign, President Trump seems more than willing – in his apparently desperate search for a win – to embrace the bubble now. Continuing the trend over the weekend, Trump’s first tweet of the morning crows of his massive market gains since election…

Chances are, Trump realizes that most people won’t look at a chart of the stock market and he just wants some good PR.

The president wants people to think that he is the reason for the stock market bubble.

This is a big mistake.

The Fed is the premier member of the so-called “Deep State”. In fact, without The Fed, there would hardly be a “Deep State” to speak of.

The Fed sits at the top of the Deep State. They have the ultimate power (that no human beings should ever have) to create new money out-of-thin-air.

In case Trump hasn’t figured it out yet, the Deep State does not like him.

Should a major decline in the stock market occur during Trump’s Administration, guess who will take the blame?

After all, he took ownership of the bubble!

Should the market tumble, the mainstream media (that also despises Trump) will have plenty of his quotes, YouTubes, and Tweets to use against him.

The economic woes will be pinned on Trump.

Will Trump deserve the blame? No, but it’ll be too late.

?This is not to say that a major decline will occur during Trump’s tenure. Bubbles can take on a life of their own, and this one may last during Trump’s full term.

But that’s a risky gamble to make.

This bubble is going on almost 10 years now without a serious decline.

Should we see a major selloff, Trump has very few friends in the major power centers that will come to his aid.

As Peter Schiff points out in this fantastic clip below: The Fed now has their fall guy:

President Trump went on to say…

“Corporations have NEVER made as much money as they are making now.” Thank you Stuart Varney @foxandfriends Jobs are starting to roar,watch!

But there is one big problem with that… 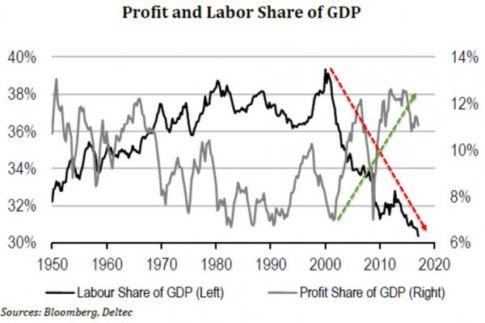