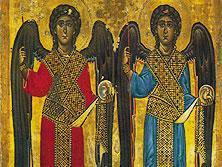 – ‘Angel particle’ which is both matter and anti-matter discovered in ‘landmark’ quantum physics breakthrough:

Scientists say they have found the first evidence that ‘Majorana fermions’ exist, 80 years after they were first suggested

Physicists believe they have discovered a particle that is both matter and anti-matter, an idea that was first theorised 80 years ago.

When the Big Bang created the universe out of nothing, scientists believe the explosion created equal amounts of matter and anti-matter.

And, if they were ever to meet, they would annihilate each other – returning to ‘nothing’ apart from a burst of energy.

However, in 1937 an Italian theoretical physicist, Ettore Majorana, predicted the existence of a strange class of particles called fermions that were their own anti-particles.

And now, in an article in the prestigious journal Science, researchers from the University of California, Los Angeles, and Stanford University reported they had found the first evidence of just such an object, which they dubbed the “Angel  Particle” after Dan Brown’s thriller Angels and Demons which involves a bomb made from a combination of matter and anti-matter.

Professor Shoucheng Zhang, a Standford University physicist, said: “Our team predicted exactly where to find the Majorana fermion and what to look for as its ‘smoking gun’ experimental signature.

“This discovery concludes one of the most intensive searches in fundamental physics, which spanned exactly 80 years.”

It is thought the existence of fermions could be used to help bring about the technological revolution promised by quantum computers, which are many times more powerful than existing machines.

One problem that has limited their development has been they must be insulated from environmental noise.

It is thought a single qubit, or quantum bit, of information could be stored in two separate Majorana fermions. So even if the interference affected information in one, the other would almost certainly keep it safe.

Professor Kang Wang, of UCLA, said: “Imagine that bits of data in standard computers are like cars traveling both ways on two-lane highways.

“A quantum computer could have many lanes and many levels of ‘traffic’, and the cars could hop between levels and travel in both directions at the same time, in every lane and on every level.

“We need stable, armoured quantum ‘cars’ to do this and the Majorana particles are those supercars.”

Other scientists hailed the research as a breakthrough.

“It does seem to be a really clean observation of something new,” said Professor Frank Wilczek, a theoretical physicist and Nobel laureate at the Massachusetts Institute of Technology.

“It’s not fundamentally surprising, because physicists have thought for a long time that Majorana fermions could arise out of the types of materials used in this experiment.

“But they put together several elements that had never been put together before, and engineering things so this new kind of quantum particle can be observed in a clean, robust way is a real milestone.”

And Professor Tom Devereaux, also of Stanford University, said: “This research culminates a chase for many years to find chiral Majorana fermions. It will be a landmark in the field.”