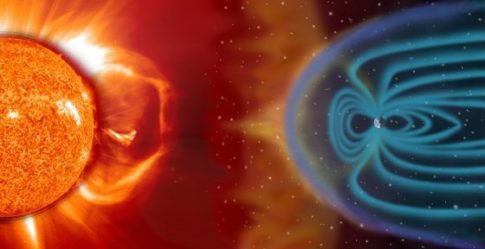 As our sun’s activity slows and the star gets quieter, scientists’ fears of solar minimum are coming to the forefront.  It isn’t the lack of activity that is terrifying those who study the sun, it’s what happens next that worries them all.

There would be nothing any of us could do if the sun’s activity decreases to the point that it causes the outermost atmospheric layer to collapse.  No amount of taxation in the name of “global warming” will save anyone on earth from this outcome. But first, scientists have to worry about the sun reaching “solar minimum” and the possibility of losing the outermost layer of the atmosphere thanks to the rapid cooling.

Solar minimum is when the sun goes through a cycle of minimal activity, and right now, it’s on the verge of reaching this point.  Our sun will near solar minimum in about 2019 or 2020. Unlike the name suggests, this lack of solar activity could cause an outer layer of the atmosphere called the thermosphere to contract and it’s not entirely clear what the effects of this could be on our planet.

The roughly 11-year cycle of the sun is reaching its low point, and soon.  This means less energy is going to be released from our star in the form of solar flares, but it will mean we have solar winds to contend with. Professor Yvonne Elsworth at the University of Birmingham says that the next solar minimum could “be in about two years” but before then, the sun is expected to unleash significantly more radiation towards Earth.  She also said that this cycle could mean that a “fundamental change in the nature of the [the sun’s magnetic] dynamo may be in progress.”

And she isn’t the only scientists who believes that this could amount to doom and gloom.  Her theory is backed up by NASA’s Solar Dynamics Observatory’s daily snaps, which have shown a spotless sun for 44 days in a row.

Solar minimums are known to spark lots of cosmic ray activity that can penetrate our atmosphere. These cosmic beams cause “air showers” of particles when they hit our atmosphere. They pose a health hazard to astronauts, and a single stray cosmic ray could cause a satellite to malfunction. As well as wiping out communication systems, a solar blast could down power grids.

It’s not entirely clear why low solar activity causes our thermosphere to collapse; or what it might be doing to our planet. Without having any effect on the sun’s cycle which will ebb and flow, “man-made global warming,” took some blame. Back in 2008 and 2009 when the sun was going through this same cycle, climate change alarmists claimed that the global warming was “adding to the cooling and contracting in the upper layer of our atmosphere.”

“This is not how it used to be and the rotation rate [of the sun] has slowed a bit at latitudes around about 60 degrees. We are not quite sure what the consequences of this will be but it’s clear that we are in unusual times. However, we are beginning to detect some features belonging to the next cycle and we can suggest that the next minimum will be in about two years,”  Professor Elsworth said.

Not many are prepared for a massive power grid failure thanks to the sun’s cycle, but it’s a growing concern among many preppers, and scientists are now validating that anxiety.