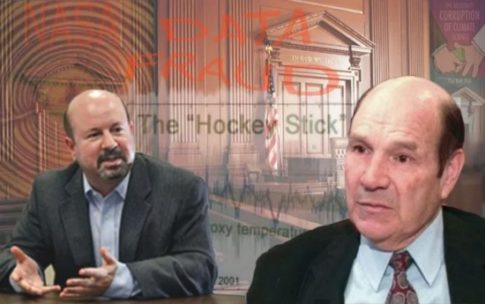 The defendant in the libel trial, the 79-year-old Canadian climatologist, Dr Tim Ball (above, right) is expected to instruct his British Columbia attorneys to trigger mandatory punitive court sanctions, including a ruling that Mann did act with criminal intent when using public funds to commit climate data fraud. Mann’s imminent defeat is set to send shock waves worldwide within the climate science community as the outcome will be both a legal and scientific vindication of U.S. President Donald Trump’s claims that climate scare stories are a “hoax.”

As can be seen from the graphs below; Mann’s cherry-picked version of science makes the Medieval Warm Period (MWP) disappear and shows a pronounced upward ‘tick’ in the late 20th century (the blade of his ‘hockey stick’). But below that, Ball’s graph, using more reliable and widely available public data, shows a much warmer MWP, with temperatures hotter than today, and showing current temperatures well within natural variation. 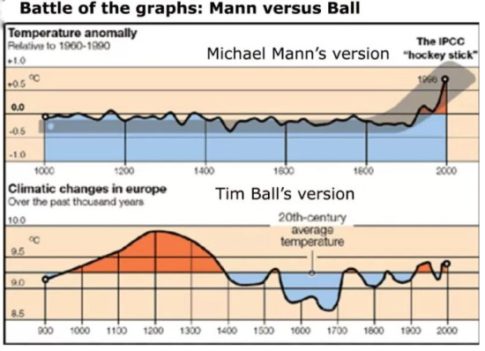 Michael Mann, who chose to file what many consider to be a cynical SLAPP (Strategic Lawsuit Against Public Participation) libel suit in the British Columbia Supreme Court, Vancouver six long years ago, has astonished legal experts by refusing to comply with the court direction to hand over all his disputed graph’s data. Mann’s iconic hockey stick has been relied upon by the UN’s IPCC and western governments as crucial evidence for the science of ‘man-made global warming.’

As first reported in Principia Scientific International (February 1, 2017), the defendant in the case, Canadian climatologist Dr. Tim Ball, had won “concessions” against Mann, but at the time the details were kept confidential, pending Mann’s response.

The negative and unresponsive actions of Dr Mann and his lawyer, Roger McConchie, are expected to infuriate the judge and be the signal for the collapse of Mann’s multi-million dollar libel suit against Dr Ball. It will be music to the ears of so-called ‘climate deniers’ like President Donald Trump and his EPA Chief, Scott Pruitt.

“Michael Mann moved for an adjournment of the trial scheduled for February 20, 2017. We had little choice because Canadian courts always grant adjournments before a trial in their belief that an out of court settlement is preferable. We agreed to an adjournment with conditions. The major one was that he [Mann] produce all documents including computer codes by February 20th, 2017. He failed to meet the deadline.”

Mann’s now proven contempt of court means Ball is entitled to have the court serve upon Mann the fullest punishment. Contempt sanctions could reasonably include the judge ruling that Dr. Ball’s statement that Mann “belongs in the state pen, not Penn. State’ is a precise and true statement of fact. This is because under Canada’s unique ‘Truth Defense’, Mann is now proven to have wilfully hidden his data, so the court may rule he hid it because it is fake. As such, the court must then dismiss Mann’s entire libel suit with costs awarded to Ball and his team.

The spectacular rise and fall of climate alarmism’s former golden boy is a courtroom battle with even more ramifications than the infamous Scopes Monkey Trial of 1925. To much fanfare at the time, Mann had sued Ball for daring to publish the damning comment that Mann “belongs in the state pen, not Penn. State.” Dr Ball brilliantly backed up his exposure of the elaborate international money-making global warming scam in his astonishing book, ‘The Deliberate Corruption of Climate Science‘.

In his books, articles, radio and television appearances, Dr. Ball has been resolute in his generation-long war against those who corrupted the field of science to which he had selflessly dedicated his life. Now aged 79, Ball is on the cusp of utter vindication. Despite the stresses and strains on himself and his family, Tim has stood at the forefront of those scientists demanding more openness and transparency from government-funded researchers.

“We believe he [Mann] withheld on the basis of a US court ruling that it was all his intellectual property. This ruling was made despite the fact the US taxpayer paid for the research and the research results were used as the basis of literally earth-shattering policies on energy and environment. The problem for him is that the Canadian court holds that you cannot withhold documents that are central to your charge of defamation regardless of the US ruling.”

A bitter and embarrassing defeat for the self-styled ‘Nobel Prize winner’ who acted as if he was the epitome of virtue, this outcome shames not only Michael Mann, but puts the climate science community in crisis. Many hundreds of peer-reviewed papers cite Mann’s work, which is now effectively junked. Despite having deep-pocketed backers willing and able to feed his ego as a publicity-seeking mouthpiece against skeptics, Mann’s credibility as a champion of environmentalism is in tatters.

But it gets worse for the litigious Penn State professor. Close behind Dr Ball is celebrated writer Mark Steyn. Steyn also defends himself against another one of Mann’s SLAPP suits – this time in Washington DC. Steyn boldly claims Mann “has perverted the norms of science on an industrial scale.” Esteemed American climate scientist, Dr Judith Curry, has submitted to the court an Amicus Curiae legal brief exposing Mann. The world can now see that his six-year legal gambit to silence his most effective critics and chill scientific debate has spectacularly backfired.

But at a time of much clamor about ‘fake news,’ it seems climate scare stories will have a new angle now that the United States has officially stepped back from the Paris Climate Treaty. President Trump was elected on a mandate to weed out climate fraud so his supporters will point to this legal outcome as vindication for a full purge. It makes a mockery of statements made by Mann last February when PSI’s Hans Schreuder and John O’Sullivan publicly backed their colleague, Dr Ball and endorsed the revelations in his book. Mann reacted by moaning:

“It is difficult to keep up with this dizzying ongoing assault on science.”

The perpetrator of the biggest criminal “assault on science” has now become clear: Dr Mann, utterly damned by his contempt of the court order to show his dodgy data.

There can be little doubt that upon the BC Supreme Court ruling that Mann did commit data fraud, over in Washington DC, the EPA’s Scott Pruitt will feel intense pressure from skeptics to initiate a full investigation into Mann, his university and all those conspiring to perpetuate a trillion-dollar carbon tax-raising sting on taxpayers.

With the scent of courtroom victory invigorating pensioner Ball, he reveals he is determined to go for a second such court win this coming Fall. Then he defends a similar libel lawsuit in Vancouver, filed against him by fellow Canadian climate scientist, Andrew Weaver.

On that case Tim reports:

“The second defamation lawsuit involves Andrew Weaver and is scheduled for court in October 2017. We are not sure what will happen as Weaver, who was a lead author for the computer model chapter of four IPCC Reports (1995, 2001, 2007, and 2013), became a politician. He ran for and was elected leader of the British Columbia Green Party and is a sitting member of the provincial legislature. We must continue to prepare for the trial, but it is the prevailing view in the court system that if a scientist becomes a politician their scientific objectivity is compromised – it is considered the bias of a ’noble cause’.”

As a career-long defender of the scientific method, embracing open and transparent verification of important government research, Ball makes this promise to his loyal supporters:

“Regardless of the outcomes I am planning a major campaign to expose to the world how they used the court system to silence me because I dared to speak out against their claims and actions. I am not particularly bright but I had two major threats, I was qualified, and I had an ability to explain in a way the public could understand. These latter abilities were honed in teaching a science credit for arts students for 25 years.”

“It goes without saying that I could not have done any of this without the support of people [like Gregg Thomspon] who gave money and John O’Sullivan who gave superb advice from a legal and life experience perspective.”

Dr Ball and his PSI colleagues are among those now calling for governments to set aside proper funding for ‘blue team’ scientists and experts skilled in critically examining claims made by so-called government ‘experts’ where they impact public policy. In the final outcome, these ‘devil’s advocates’ of science (or ‘skeptics’) are the best defense against waste and corruption.

To that end, Australian Astronomer and entrepreneur Gregg Thompson has been crucial in providing resources that helped establish PSI as a registered UK charity devoted to this public service. PSI is urging more charitable donations from ordinary citizens to help further the cause of creating more ‘blue team/red team’ initiatives devoted to monitoring government science and prepared to bravely expose negligence and intentional misconduct on the public dime.