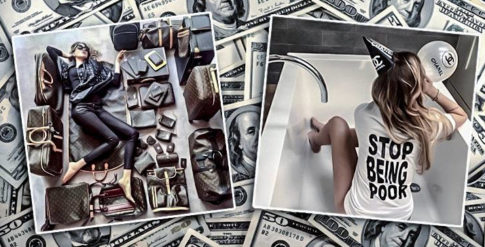 The divide between wealthy and working class has grown wider each year since the last financial crisis, but this disconnect is about much more than just money or politics. The super-rich, in particular, have become completely detached from the everyday problems facing millions of their fellow citizens. Instead of recognizing the urgency of the current situation and contributing to solutions that help empower all members of society, the focus for many has shifted toward simply indulging in the present moment and increasing luxury. This kind of self-centered worldview has emerged throughout history and typically thrives most when decadent empires start to crumble.

Right now, the average person is forced to worry about central banks devaluing their currencies, corrupt bureaucrats eroding their civil liberties, and an economy on life support. Meanwhile, a faction of affluent individuals has committed themselves to avoiding the turmoil around them, instead choosing to obsess over life extension, genetic manipulation, and creating luxurious doomsday plans. Those people who have the crucial intellect, resources, and influence needed to implement real change are consumed with self-interest to the point of total apathy towards the future.

One of the more disturbing trends has been a rise in interest regarding something called parabiosis. This practice involves blood transfusions between the young and old in an attempt to slow the aging process. The procedure has been studied in the past but has always been met with moral and scientific criticism. Recently, however, a California start-up called Ambrosia began offering clients the opportunity to purchase the blood of someone under the age of 25 for a mere $8,000.

The process gained attention after Paypal co-founder Peter Thiel came out in support of further research during an interview:

“I’m looking into parabiosis stuff, which I think is really interesting. This is where they did the young blood into older mice and they found that had a massive rejuvenating effect. And so that’s … that is one that … again, it’s one of these very odd things where people had done these studies in the 1950s and then it got dropped altogether. I think there are a lot of these things that have been strangely underexplored.”

The blood used for these transfusions is often purchased from blood banks without informing the original donors. Popular high-school blood drives could soon have a whole new incentive to encourage students to participate. Any possible medical advancements that can help improve the lives of sick people should be explored, but for a private business to benefit directly from the generosity of others without their consent is a bit unnerving.

The question of whether this treatment is effective or not is almost a secondary issue to the ethical one. What does it show about our society when the priority of so many is not building a better world for the next generation but, rather, appeasing their egos by desperately clinging to their youth? The similarity to vampirism can’t be overlooked and may be another sign that, in the end, the truth is stranger than fiction.

The super-wealthy who can see the dangers facing the world are also fine with hitting the eject button to their own private bunkers in a worst-case scenario. The prepping community that was once isolated to ‘conspiracy theorists’ and survivalist groups has now been adopted by the 1%. Several billionaires have even gone so far as to buy entire islands to guarantee they won’t be swept up in the panic of the masses.

Tim Chang, the managing director at a financial firm called the Mayfield Fund, spoke to a reporter at the New Yorker about some of the conversations going on in these circles:

“There’s a bunch of us in the Valley. We meet up and have these financial-hacking dinners and talk about backup plans people are doing. It runs the gamut from a lot of people stocking up on Bitcoin and cryptocurrency, to figuring out how to get second passports if they need it, to having vacation homes in other countries that could be escape havens…I’ll be candid: I’m stockpiling now on real estate to generate passive income but also to have havens to go to….I kind of have this terror scenario: ‘Oh, my God, if there is a civil war or a giant earthquake that cleaves off part of California, we want to be ready.’ ”

While the ideas of democratic socialism have spread throughout the country, it’s clear that extreme individualism has developed on the other side. The majority of those with the means to care for themselves and their families have abandoned any connection to the rest of society. As long as the impact of the coming upheaval doesn’t affect them directly, it appears the fate of the rest is irrelevant.

The mentality of the nation has transitioned from proactive to reactive, with a sense of inevitability about the ultimate outcome we’re all facing. There is almost no effort to openly discuss the growing prospect of a civil war or severe economic breakdown, even as it grows more plausible in the minds of those paying attention. This obsession on the part of the super-rich for god-like control over their destinies only shows the fear that overwhelmingly dictates their choices. Maybe the modern day peasants of society should simply heed the advice of Marie Antoinette and eat cake while the world burns.