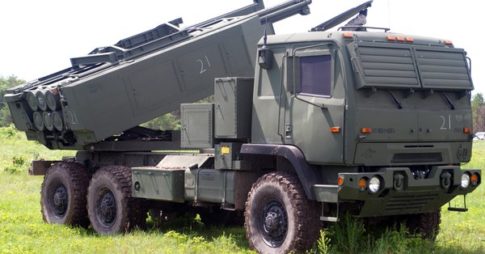 Less than 24 hours after US Secretary of State Rex Tillerson said that the US has no authorisation to attack Syrian forces, the Russian Ministry of Defence confirmed that the US has moved its HIMARS long-range rocket launchers from Jordan to inside the Syrian border near the US garrison in At Tanf where over the last two months the US has launched repeated attacks against convoys of the Syrian Arab Army and its allies.

Russia said it will be monitoring the situation closely.

The Russian Ministry of Defence confirmed that while the missiles now in southern Syria are outside of striking distance from Raqqa where the US allied SDF are fighting ISIS,

“At the same time, the forces of the US-led anti-ISIS coalition have on several occasions hit Syrian government troops who are fighting against Islamic State [aka ISIS or Daesh] near the Jordanian border. Therefore, it’s not hard to imagine that such strikes on the Syrian military may be continued in the future, but this time with the use of HIMARS”.

Russia is right to be weary of US promises of non-interference with Syria’s internal affairs. Such promises have been made in the past and frequently broken, not least when Donald Trump ordered the bombing of a Syrian airbase on the 6th of April this year.

Russia has condemned the illegal use of US force in Syria before. This time, by announcing the US moving of heavy military equipment illegally into Syria, Russia is making its feelings known preemptively.