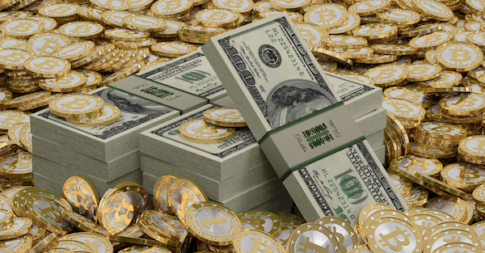 – You Won’t Believe This Stupid New Law Against Cash And Bitcoin:

This one is almost too ridiculous to believe.

Recently a new bill was introduced on the floor of the US Senate entitled, pleasantly,

You can probably already guess its contents.

These people are certifiably insane.

Among the bill’s sweeping provisions, the government aims to greatly extend its authority to seize your assets through “Civil Asset Forfeiture”.

Civil Asset Forfeiture rules allow the government to take whatever they want from you, without a trial or any due process.

This new bill adds a laundry list of offenses for which they can legally seize your assets… all of which pertain to money laundering and other financial crimes.

Here’s the thing, though: they’ve also vastly expanded on the definition of such ‘financial crimes’, including failure to fill out a form if you happen to be transporting more than $10,000 worth of ‘monetary instruments’.

Have too much cash? You’d better tell the government.

If not, they’re authorizing themselves in this bill to seize not just the money you didn’t report, but ALL of your assets and bank accounts.

They even go so far as to specifically name “safety deposit boxes” among the various assets that they can seize if you don’t fill out the form.

(Yet another reason to consider storing cash, gold, and silver in an overseas safety deposit box.)

This is unbelievable on so many levels.

It’s crazy to begin with that these people are so consumed by the fact that someone has $10,000 in cash.

But it’s even crazier that they’re threatening to take EVERYTHING that you own merely for not filling out a piece of paper, without any due process whatsoever.

Oh, and on top of civil asset forfeiture penalties, there are also criminal penalties.

Right now according to current law they can imprison you for up to FIVE YEARS for not filling out the form. Five years.

But apparently that doesn’t go far enough to protect us against evil men in caves.

So this bill aims to double the criminal penalty to TEN years in prison.

And if that weren’t enough, this bill also gives them with new authority to engage in surveillance and wiretapping (including phone, email, etc.) if they have even a hint of suspicion that you might be transporting excess ‘monetary instruments’.

It’s not just government spy agencies to worry about, either.

Banks in the US are already unpaid government spies, required by law to fill out suspicious activity reports on their customers.

Then Congress started expanding those requirements to include other businesses and industries that might come into contact with cash.

According to the law (section 5312 of US Code Title 31), those industries are also required to spy on their customers for the government.

But under this new bill, they want to forcibly recruit even more unpaid spies, including any business which issues or redeems ANYTHING that’s prepaid.

So, Amazon.com, which issues and redeems prepaid gift cards, will be required under this bill to file reports to the government.

For that matter, TGI Fridays and Chuckee Cheese will also become unpaid government spies since they both issue and redeem prepaid vouchers.

Truly these Senators have figured out how to strike at the heart of ISIS.

Further, their bill wants to pull any business which “issues” cryptocurrency under the anti-money laundering regulatory umbrella.

Here’s where these people demonstrate that they have no idea what they’re talking about.

No one “issues” Bitcoin. There’s no Bitcoin central bank. There’s no Chairman of Bitcoin who decides on a whim to increase the supply.

Bitcoin is created automatically amounts that are pre-determined by its code. It’s software.

So the Senate is essentially trying to force the Bitcoin core software to comply with money laundering regulations.

The bill also attempts to drop a major bomb on Bitcoin by including it in the list of monetary instruments that must be reported when entering or leaving the US.

So theoretically if you leave the US with more than $10,000 in Bitcoin or Ether, you’d have to confess this fact to the authorities or otherwise face the aforementioned penalties, i.e. prison time, civil asset forfeiture, etc.

As Smaulgold.com’s Louis Cammarosano  explains, the bill contains a provision that would require the Secretary of Homeland Security and the Commissioner of U.S. Customs and Border Protection to devise a “border protection strategy to interdict and detect prepaid access devices, digital currencies, or other similar instruments, at border crossings and other ports of entry for the United States, including an assessment of infrastructure needed [emphasis added] to carry out the strategy.”

The respective Secretary and Commissioner would present their findings to Congress no later than 18 months after passage of the bill.

The obligation to declare amounts in any form over $10,000 exists, irrespective of whether custom officials have a way of detecting such holdings. Since digital currencies technically travel with the holder where ever the holder goes, one would have to declare one’s entire crypto portfolio each time the holder entered the U.S.

Such a declaration is not required for travelers who may happen to have bank accounts or precious metals worth more than $10,000 stored outside the United States.

The type of infrastructure required to detect foreign holdings may come in the form of (i) expanding Foreign Account Tax Compliance Act to currently unregulated foreign crypto currency exchanges and to non U.S. citizens. FATCA currently only applies to U.S account holders of certain foreign financial and non financial institutions; (ii) some type of global monitoring of blockchain activity; or (iii) extreme vetting at the border and penalties for non disclosure that would encourage full disclosure.

As you can see, this bill criminalizes or delegitimizes the most mundane and harmless financial activities, all under the guise of keeping us safe.

Of course nothing in this bill is about keeping people safe.

This bill is nothing more than another weapon in their ongoing War on Cash… and now cryptocurrency too.