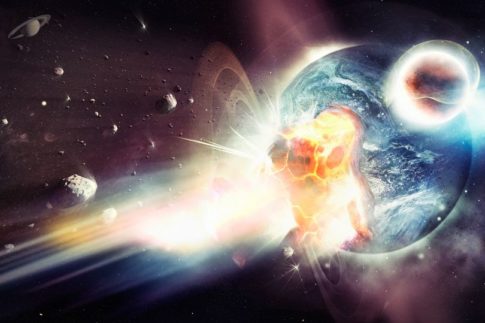 – Dramatic collision of two stars in 2022 linked to ancient Jewish prophecy about the coming of the Messiah:

Citing an ancient prophecy, a prominent rabbi claims a forthcoming ‘red nova’ is evidence of the ‘the Messianic process’

The collision of two distant stars in 2022 is set to create an astronomical spectacle that could be viewed from planet Earth with the naked eye.

Called a “red nova”, the stunning space event will create a massive explosion and the birth of a new star. The bright crimson light of the nova could be visible in the sky for up to six months.

Now one religious leader has cited an ancient prophecy and suggested the event will mark the coming of the Messiah.

Yosef Berger, a prominent rabbi from King David’s Tomb on Mount Zion, has quoted the 12th century rabbi Moses ben Maimon – known as Rambam – whose teachings form the foundation for much of Jewish law.

“The Rambam brings this verse about a star appearing as proof that the Messiah will come one day,” he told Breaking Isreal News .

“The Zohar (a work of Jewish mysticism) states explicitly that the Messianic process will be accompanied by several stars appearing. The Zohar goes into great depth, describing how many stars, and which colours they will be,” he said.

A binary star is actually a system made up of two stars that orbit each other.

The research team at Calvin College in Michigan believes that these two stars, located some 1,800 light years from Earth, are getting closer to each other and will eventually collide in 2022 – give or take a year.

The resulting red nova would cause the brightness of the star to increase by a factor of 10,000, making it visible from Earth.

“If the prediction is correct, then for the first time in history, parents will be able to point to a dark spot in the sky and say, ‘Watch, kids, there’s a star hiding in there, but soon it’s going to light up’,” said Matt Walhout, dean for research and scholarship at Calvin College.

Scientists have never predicted a binary star collision before, though they have observed them.