What if all these empty cities were built, not to create an artificial GDP boost, but for the time after the coming earth changes (which have nothing to do with non-existent global warming), when all the big cities anywhere near the coast will be totally destroyed and wiped off the map? What if the Chinese government knows exactly what is coming our way?

As President Trump’s “Infrastructure Week” comes to an ignominious end, NIRP Umbrella’s Alex Deluce reminds us that spending money on bridges to nowhere and cities of the future is anything but the stimulating panacea it is talked up to be…

Is a Chinese credit bubble in the cards? Well, it will be interesting to see if China’s authorities can get through the unwind of US $3 trillion worth of excess credit and the distressed debt on banks’ balance sheets.

From 2009 to 2016, more than 10 trillion of Chinese investment was thrown at infrastructure, ghost cities, and corruption thanks to a helping hand from the Chinese banks and foreign lenders eager to participate in the Chinese growth story.

In fact, hundreds of new cities in China are essentially empty. The hope is that rural population someday move in.

Roughly 40% of the 300 million Chinese expected to move into a town by 2030 will mostly be moving to smaller cities in the “chengzhenhua” system.

As OfTwoMinds’ Charles Hugh Smith recently explained, building bridges to nowhere isn’t just a waste of money in the present; it saddles the economy with productivity-draining costs for decades to come.

If there is anything the political left, right and center can agree upon, it’s the lasting benefits of spending more (borrowed) money on infrastructure: roadways, rail lines, airports, seaports, pipelines, dams, electrical lines and so on: the physical networks of advanced civilization.

That Roman roadways constructed 2,000 years ago are still visible illustrates the longstanding value of reliable infrastructure: Roman political control and trade depended on roadways and sea transport to tie the sprawling empire together.

This is the basic assumption behind the notion that virtually any and all infrastructure spending will create value far into the future.

But is this really true? Does rebuilding and/or adding infrastructure create economic value?

To answer, we need to look at two issues: productivity and cost-benefit.

The value created by increased productivity must far outweigh the cost.

Consider the classic “bridge to nowhere” infrastructure project: a bridge is constructed between a sparsely populated island and the mainland. The payoff is a handful of residents are spared the time and inconvenience required to ship their vehicles between the island and mainland on a ferry.

Does this time savings translate into increased productivity, or merely extra leisure? And what was the cost to gain this very modest increase in leisure/productivity? Spending tens of millions of dollars on the bridge actually reduces the productivity of the entire economy due to the opportunity cost: the millions of dollars could have been more productively invested elsewhere, and spending the money on a low-value-creating bridge deprived the economy of the capital, labor etc. that could have been better invested in productivity-generating projects.

Why anyone believes that building ‘infrastructure’ somehow promotes economic growth in this day and age (as though it were 1950’s) is delusional. The reason ‘infrastructure’ worked back then to build economic activity was simply because it lagged behind the burgeoning private industry. These days there is no ‘hard industry’ left to ‘lag behind.’ Building a bigger road between the suburbs and the Mall won’t create prosperity for anyone except the owners of the road building company. Unlike a 1950’s road linking a steelworks to a port or a Beef farm to a meatworks.”

In other words, when commerce already exists but is cumbersome, infrastructure that smooths the flow yields enormous productivity gains.

One example of this from history is the construction of the first stone bridge across the Seine River in Paris. This single structure changed commerce, tourism and social relations in the city, as it enabled two carts to pass side by side and enable pedestrians to cross the river safely.

For more on this impact of a single durable, commerce-enabling bridge in Paris, read this book: How Paris Became Paris: The Invention of the Modern City.

Replacing existing infrastructure is also problematic. It may well be necessary, but since it won’t boost regional productivity (since it’s merely replacing existing structures), it acts as a tax on the regional economy: if the replacement costs $1 billion and generates no real gains in productivity, it is in essence a tax that bleeds capital from the economy that could have been productively invested elsewhere.

Rebuilding a bridge generates higher spending on materials and wages, but if it doesn’t generate additional productive capacity equal to its cost, this additional spending (in our world, always paid for with borrowed money that accrues interest for decades to come) runs out once the project is complete, but the costs of paying for the replacement continue on for decades.

As a rule of thumb, if a replacement bridge costs $1 billion, it will cost users and taxpayers $3 billion over the life of the loan/bond that funded the project.

Borrowing immense sums to spend on infrastructure that doesn’t boost productivity actually cripples an economy by channeling scarce capital and tax revenues into projects that only boost spending for a few years at best, while the costs of borrowing the money pile up for decades to come.

In other words, building bridges to nowhere isn’t just a waste of money in the present; it saddles the economy with productivity-draining costs for decades to come.

This high future cost for no-productivity gain infrastructure effectively bleeds the economy of income and capital for decades, for the temporary sugar-high of infrastucture spending today.

A rigorous cost-benefit analysis might conclude that some aging, marginal infrastructure should be torn down rather than replaced. If self-driving vehicles will reduce vehicles on the roads significantly– and some estimates range as high as an 80% reduction in traffic–perhaps we should wait for this technology to mature before spending trillions of dollars on infrastructure that is about to be under-utilized.

We should instead ask: where are the big gains in productivity going to come from going forward? The answers to that question should guide our public and private investment decisions.

In the meantime, we should question whether proposed infrastructure spending is actually an “investment in our future” or just another bureaucratic boondoggle designed to enrich crony-cartels and justify rising bureaucratic budgets: 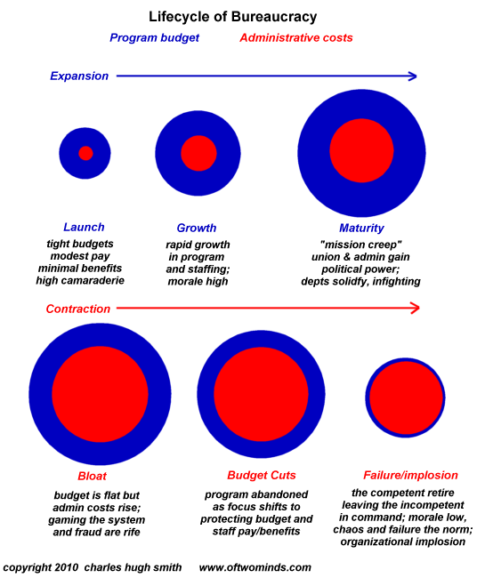