– Comey Testifies AG Lynch ‘Pressured’ Him To Use Clinton Campaign Language; “It Gave Me A Queasy Feeling”:

In perhaps the most stunning section of former FBI Director Comey’s testimony today, he detailed his interaction with then Attorney General Loretta Lynch about his specific language about the Clinton Email “investigation.” 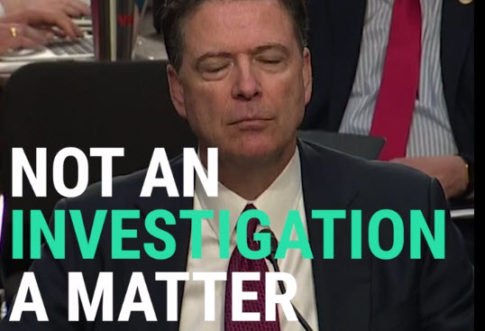 As DailyCaller notes, Comey said Lynch instructed Comey not to call the criminal investigation into the Clinton server a criminal investigation. Instead, Lynch told Comey to call it a “matter,” Comey said, “which confused me.” Comey cited that pressure from Lynch to downplay the investigation as one of the reasons he held a press conference to recommend the Department of Justice not seek to indict Clinton.

COMEY: Well, it concerned me because we were at the point where we refused to confirm the existence as we typically do of an investigation for months. And was getting to a place where that looked silly because the campaigns we’re talking about interacting with the FBI in the course of our work. The Clinton campaign at the time was using all kinds of euphemisms, security matters, things like that for what was going on.

We were getting to a place where the attorney general and I were both going to testify and talk publicly about it I wanted to know was she going to authorize us to confirm we have an investigation. She said yes, don’t call it that, call it a matter. I said why would I do that? She said, just call it a matter. You look back in hindsight, if I looked back and said this isn’t a hill worth dying on so I just said the press is going to completely ignore it. That’s what happened when I said we opened a matter.

They all reported the FBI has an investigation open. So that concerned me because that language tracked the way the campaign was talking about the FBI’s work and that’s concerning.

LANKFORD: You gave impression that the campaign was somehow using the language as the FBI because you were handed the campaign language?

So who was obstructing or trying to interfere there?

Comey said that this troubled him greatly and convinced him, “I have to step away from the department if we’re too close this case credibly.”

Still, we note that despite his admission that the conversation “gave me a queasy feeling,” Comey went ahead and followed her orders because “that was not a hill i wanted to die on…”

Under questioning by panel chairman Sen. Richard Burr (R-NC), Comey said that he was uncomfortable with the unexpected meeting Lynch had with former President Bill Clinton on an airport tarmac last year. Comey said that meeting convinced him that the independence of the investigation was tainted with regard to the Justice Department and led him to go public with the bureau’s findings on Clinton.

Then Comey added in later testimony that “Loretta Lynch had appearance of conflict of interest.”

As a reminder, Circa notes that when Comey testified on May 3 before the Senate Judiciary Committee, he was asked about the Lynch meeting.  He told lawmakers “a number of things had gone on which I can’t talk about yet, that made me worry that the department leadership could not credibly complete the investigation and decline prosecution without grievous damage to the American people’s confidence in the justice system.” Bill Clinton met with Lynch in June 2016 at an airport in Phoenix, Arizona. Lynch said at the time that “our conversation was a great deal about grandchildren, it was primarily social about our travels and he mentioned golf he played in Phoenix.”  On March 15, Judicial Watch, a conservative watchdog group, sued the Justice Department for all relevant material related to the Lynch and Clinton Phoenix meeting.

1) The utter politicization of the Justice Department (from the top-down) under Obama, has now been exposed as “fact” if Comey is to be believed.

2) Why did Comey think that a Clinton “Hill” was not worth dying on, but a Trump “Hill” was?

3) Why didn’t Comey “memorialize” this conversation in one of his memos at the time… as he said he did immediately after his Trump conversation?

4) So the only official to “pressure” Comey during his tenure was Loretta Lynch?

5) What would happen if AG Sessions colluded with the FBI Director to alter their statements about a Trump investigation for political reasons?

But hey, let’s spend the day ignoring that focusing on speculation about Trump and his “Russian hookers” obsession. We leave you with this…

2 thoughts on “Comey Testifies AG Lynch ‘Pressured’ Him To Use Clinton Campaign Language; “It Gave Me A Queasy Feeling””