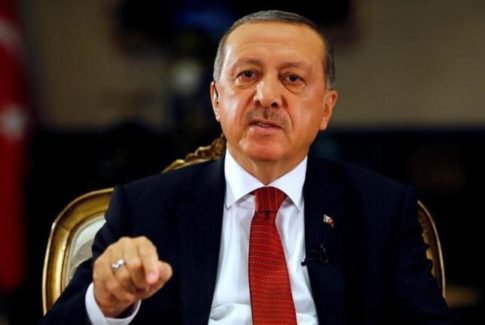 In the ongoing diplomatic crisis between Qatar and its Gulf/Arab peers, which is either the result of Saudi nat gas envy or – for those who watch CNN – Russian hacking, Turkey has emerged as a vocal  supporter of the small but wealthy state.  On Tuesday, Turkish President Recep Erdogan defended Qatar, saying he personally would have intervened if accusations that the tiny Gulf emirate supports “terrorism” were true and said he intends to “develop” ties with the embattled Gulf state hit by sanctions from Saudi Arabia and its allies.

“Let me say at the outset that we do not think the sanctions against Qatar are good,” Erdogan said in a speech in Ankara.”Turkey will continue and will develop our ties with Qatar, as with all our friends who have supported us in the most difficult moments,” he added in reference to last year’s failed coup. The support puts Turkey in a complicated position because while the NATO member has close ties with Qatar it also has good relations with the other Gulf states, especially Saudi Arabia.

Turkey’s support for Qatar also has ideological reasons as in the past both both have provided support for the Muslim Brotherhood in Egypt and backed rebels fighting to overthrow Syrian President Bashar al-Assad.

Erdogan was careful not to criticise Riyadh, calling on the member nations of the Gulf Cooperation Council to “resolve their differences through dialogue”.

“Presenting Qatar as a supporter of terrorism is a serious accusation,” the Turkish leader said. “I know [Qatar’s leaders] well and if that had been the case, I would have been the first head of state to confront them” which of course is ironic coming from near-dictator, who last year cracked down on over 100,000 Turkish citizens accusing them of cooperating with Fethulah Gulen’s “shadow state”, and who has been accused of using false flag terrorist attacks to crack down on the Kurdish minority in his country.

On Wednesday morning Turkish support for Qatar escalated after the country’s parliament was expected to fast-track a draft bill allowing its troops to be deployed to a Turkish military base in Qatar, officials from the ruling AK Party and the nationalist opposition said.

According to Reuters, lawmakers from Erdogan’s AK Party have proposed debating two pieces of legislation: allowing Turkish troops to be deployed in Qatar and approving an accord between the two countries on military training cooperation, AKP and nationalist opposition officials said. The draft bills, which were drawn up before the spat between Qatar and its Arab neighbours erupted, are expected to be approved by the Ankara parliament later on Wednesday.

Just like the US with its CENTCOM base, as part of an agreement signed in 2014 Turkey set up a military base in Qatar, its first such installation in the Middle East. In 2016 Ahmet Davutoglu, then Turkish prime minister, visited the base where 150 troops have already been stationed, the Turkish daily Hurriyet reported.

In an interview with Reuters in late 2015, Ahmet Demirok, Turkey’s ambassador to Qatar at the time, said 3,000 ground troops would eventually be deployed at the base, planned to serve primarily as a venue for joint training exercises.

The imminent Turkish decision to deploy troops comes as a Saudi 24 hour ultimatum, issued on Tuesday night, and containing 10 conditions among which demands by Saudi Arabia is that Qatar end all ties Muslim Brotherhood and Hamas, is ticking. While it was unclear what the outcome would be should Qatar fail to comply, some analysts have gone so far as to suggest a “military confrontation.”

As we reported last night, speaking to Al Jazeera, analyst Giorgio Cafiero of Gulf State Analytics, a geopolitical risk consultancy based in Washington, DC, said: “I think the Kuwaitis as well as Omanis … fear the prospects of these tensions escalating in ways which could undermine the interest of all six members of the GCC.

“There are many analysts who believe that a potential break-up of the GCC has to be considered right now. If these countries fail to resolve their issues and such tensions reaches new heights, we have to be very open to the possibility of these six Arab countries no longer being able to unite under the banner of one council,” said Cafiero.

He added that if tension escalates, some have warned of a “military confrontation”.