A tsunami of outrage swept across Germany right after President Donald Trump announced dropping out of the Paris Accord (and not to transfer billions of taxpayer money over to the UN each year).

It appears the President’s bold and courageous move is leading to potentially dangerous pockets of energy policy and climate science uprising in Germany.

A reader just pointed out something a bit stunning: Germany’s flagship ARD television, the country’s version of the BBC, reported here how a group of conservative politicians from Angela Merkel’s CDU party known as the Berliner Kreis has just voiced its strong opposition to the party’s climate and energy policy course. 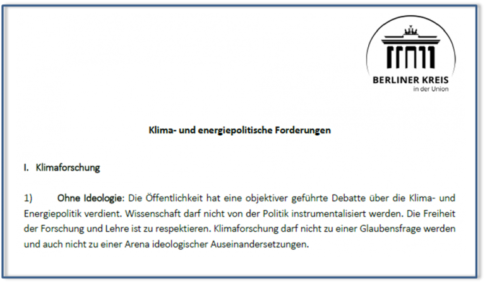 A group from Angela Merkel’s CDU party recently released its “Climate and Energy Political Demands”, calling for a science and energy policy “without ideology”, an end to “moral extortion”, and an exit from the “climate saving circus”, pdf here.

According to the ARD report, the group of conservatives is disputing the “‘solitary role’of the greenhouse effect in global warming’ – and is demanding a change in direction in the chancellor’s climate policy“.

The Berliner Kreis declaration demands a return to science “without ideology”, a “fact-based” discussion — one free of “moral extortion” –, and calls for a “reform of the IPCC”, which “has not been as scientifically sound as an advising body needs to be”.

The Berliner Kreis declaration adds that the science must not become “a sort of world rescue circus”.

The Christian conservative group also casts Germany’s CO2 reductions policy into question, noting that so far the country has cut back its CO2 emissions by less than half a billion tonnes while the rest of the plant has increased it by 14 billion tonnes, i.e. 30 times more than what the country has saved.

Germany’s CO2 emissions represent only 2% of the globe’s output, but its energy policy has been 100% pain.

Now that the Berliner Kreis position has become public, already it has come in the cross-hairs of major media outlets, setting off a wave of reports, e.g. here, here and here.

It remains to be seen what the real ARD intent of their report was: Whether to show that there is dissent in on the climate topic in Germany and that policy needs to take a step back, or if it is to identify and single out unwanted voices Alinsky style (Rule 13).

Lately the approach used by the media and entrenched establishment in Germany concerning unwanted dissenting voices on sensitive issues – such as Europe, immigration and climate – has followed the labelling formula of: dissent = extremism = Nazi. Many feel intimidated by it and thus are afraid to speak up.

What becomes of the dissident Berliner Kreis will remain a question. Expect Merkel to mobilize forces to shut them up, and down. The Berliner Kreis would be well-advised to quickly forge channels and networks with international dissenting groups, as they may be about to find out what the real price of civil courage is.

German publicist Dirk Maxeiner here, who knows first-hand the cost of civil courage, applauds the move by the group of CDU dissenters, commenting (with sarcasm):

A group of CDU parliamentarians that calls itself the ‘Berliner Kreis’ dares to think for itself on the climate issue. The Tagesschau comments on this atrocity with the headline: ‘CDU right wingers attack Merkel’ climate direction. Skepticism, thought, realism, facts – all right wing.”