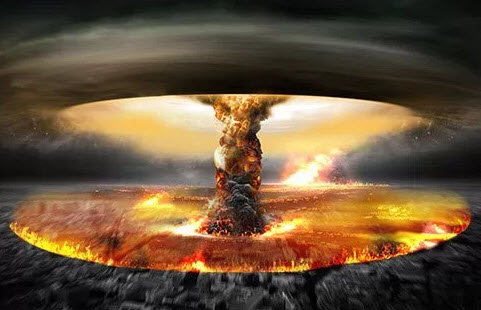 As of late, the media has forgotten about tensions between Ukraine, NATO, and Russia. Crimea and the conflict in Eastern Ukraine have largely left the public’s awareness. However, that shouldn’t be the case, because this region is still a powder keg that could blow at any time. And if it does, it could easily result in another world war.

If you don’t think the situation in Ukraine could still explode into a wider conflict, take a look at what this member of Russia’s parliament recently said at an international security conference.

“On the issue of NATO expansion on our borders, at some point I heard from the Russian military — and I think they are right — If U.S. forces, NATO forces, are, were, in the Crimea, in eastern Ukraine, Russia is undefendable militarily in case of conflict without using nuclear weapons in the early stage of the conflict,” Russian parliamentarian Vyacheslav Alekseyevich Nikonov told attendees at the GLOBSEC 2017 forum in Bratislava, Slovakia.

Russian military leaders have discussed Moscow’s willingness to use nuclear weapons in a conflict with military leaders in NATO, as part of broader and increasingly contentious conversations about the alliance’s expansion, Nikonov later told Defense One.

That’s a startling admission when you think about it. It seems the Russian’s believe that if there is a war between Russia and the West, their conventional forces won’t be capable of defending Russian soil from NATO. They’re basically warning us that “if you bring a knife to this fight, we know we can’t win, so we’ll be bringing a gun.”

And there’s a good reason for them to believe that NATO poses a dire threat to their territory and interests.

“For us, [NATO] is a military alliance spanning three-quarters of the global defense money, now planning to expand that figure,” said Nikonov.

In the two years since Russia annexed Crimea, NATO’s Baltic members have doubled their defense budgets. In 2018, Latvia, Lithuania, and Estonia are projected to spend nearly $670 million, up from $210 million in 2014. “This growth is faster than any other region globally,” Craig Caffrey, principal analyst at IHS Jane’s, remarked last October. “In 2005, the region’s total defence budget was $930 million. By 2020, the region’s defence budget will be $2.1 billion.”

NATO has been expanding its troop presence in Eastern Europe as well. In April 2016, during the Warsaw summit, NATO agreed to increase the size of the NATO force deployed to Baltics, a posture move sometimes called enhanced forward presence. In January, the U.S. deployed some 4,000 troops to Poland. The following month, Germany, announced that it will send some 1,000 troops to  Lithuania.

Since the end of the Cold War, NATO has slowly but surely encircled Russia. Just last month NATO admitted another Eastern European nation into their alliance, and the current antagonism between West and Russia is being driven by NATO’s attempts to absorb Ukraine.

The West needs a reality check. The further we encroach into Russia’s traditional sphere of influence, the closer we come to World War Three. And if Russia really is such a serious threat to us, as our government has claimed many times in recent years, is expanding NATO really going to guarantee our safety?

We were perfectly capable of protecting ourselves from the much more powerful Soviet Union, and we did so with a much smaller alliance. We’re expanding NATO to Russia’s doorstep, and all we’re receiving in return is the heightened risk of nuclear war.