The freedom to have to wear a headscarf and …

– Fleeing Tyranny Or Bringing It With Them?:

Authored by Khadija Khan via The Gatestone Institute,

Terror attacks and other offshoots of Islamic extremism have created an atmosphere of mistrust between Europe’s natives and thousands of those who entered European countries to seek shelter.

The situation is turning the Europeans against their own governments and against those advocating help for the war-torn migrants who have been arriving.

Europeans are turning hostile towards the idea of freedom and peaceful coexistence; they have apparently been seeing newcomers as seeking exceptions to the rules and culture of West.

In an unprecedented shift in policy after public fury about security, the German government decided to shut down the mosque where the terrorist who rammed a truck into a shopping market in Berlin, Anis Amri, was radicalized before hecommitted the crime.

The mosque and Islamic center at Fussilet 33 in Berlin had apparently also been radicalizing a number of other youths by convincing them to commit terror attacks in Europe and to join the terror group Islamic State of Iraq and Syria (ISIS).

The authorities had the mosque under surveillance for a time but did not make a move before 12 innocent civilians were butchered by Amri on December 19, 2016, while leaving around 50 others injured.

The police and counter terror authorities also conducted raids in 60 different German cities and searched around 190 mosques to target kingpins of another group called “The True Religion”.

Europeans appear to be seeking an alternative way to control this social disruption.

Many Muslims want to live in segregated areas where they strive to create the kind of culture they left behind before settling in the West. This preference, however, seems to lead to a rise in extremism and is proving counterproductive for the society as a whole.

The newcomers soon start demanding privileges. They ask for gender segregation at work and in educational institutions; they ask for faith schools (madrasas), and demand an end to any criticism of their extremist practices such as female genital mutilation (FGM), forced marriages, child marriages and inciting hatred for other religions. They call any criticism “Islamophobia”. They additionally seek to establish a parallel system of justice such as sharia courts.

Hardliners have been delivering sermons across the Europe preaching hatred and intolerance of other religious groups.

Most newcomers also seem reluctant to condemn the terror attacks committed by jihadis or the inhumane activities of totalitarian regimes such as Saudi Arabia or Iran. Most newcomers are also unlikely, on different pretexts, to support any anti-terror or anti-extremism program.

These groups seem only to focus on criticizing the policies of West towards the Middle East and Muslim countries and blame the West for everything wrong with the Muslim world.

The Muslim Council of Britain — a non-government organization claiming to represent British Muslims, and affiliated with over 500 mosques, charities and schools — introduced its own so-called counter-terrorism campaign, instead of following the one launched by the government.

In the U.S., the Council of American Islamic Relations (CAIR) also shocked many when its leaders demanded the district attorney of Louisiana cancel an ongoing anti-terrorism training program and accused the organizer of being a “notorious Islamophobe”.

“We are not a pro-abortion march, we are a pro-women march,” one of the advocates for sharia in the West, Linda Sarsour, stated while addressing a feminist event in Washington D.C.

The event was organized right after President Donald Trump’s inauguration and was supposed to criticize his anti-abortion stance and seek equal rights for women.

Sarsour, however, seemed less interested in the cause of these women and sounded hungrier for attention and publicity to market her brand of sharia.

Sarsour , who appears to have been seeking imposing sharia on West – in a plan that would entail taking away most of the rights from these liberal women — was instead standing next to them as if she were the champion of their rights.

Sarsour, known for desiring to slice off the genitals of girls, merely tweets for general Muslim across the globe. 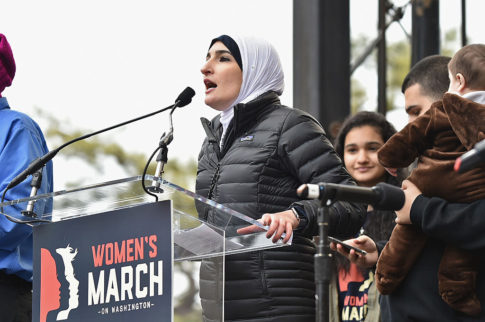 Linda Sarsour speaks onstage during the Women’s March on Washington on January 21, 2017 in Washington, DC. (Photo by Theo Wargo/Getty Images)

Sadly, we now have in the West extremists who seem hell-bent on dragging civilization back to repression and violence in the name of sharia.

These hardliners are projecting a dogma that implies the advantages of killing and persecuting apostates, non-Muslim minorities, homosexuals, and inflicting the same brutalities on women and minors as we have been seeing in many Muslim majority countries in Middle East, Asia and Africa – as well as, unofficially but increasingly, in Europe and the West.

The British government recently announced a posthumous pardon for thousands of people who were penalized by the state for homosexual activities decades ago.

In the same Britain, however, more than half the Muslim population still believes that in the U.K., homosexuality should be completely illegal.

The cracks between the Muslim and European cultures seem to be widening even in the most harmonious places.

In Canada, a resolution by a Muslim MP seeking special laws to condemn freedom of speech about Islam, has led to scores of Canadians taking to the streets calling on the government to avoid bending rules in favor of a specific religious group in the country.

Many newcomers to Canada and Europe are demanding similar laws to those from which they claim to be seeking refuge.