CNN has terminated our agreement with Kathy Griffin to appear on our New Year’s Eve program.

Her partner for the New Year’s Eve shows, Andersoin Cooper, had already disowned her…

For the record, I am appalled by the photo shoot Kathy Griffin took part in. It is clearly disgusting and completely inappropriate.

Nigel Farage was quick to respond…

Kathy Griffin’s removal from CNN is the first kickback I’ve seen against the wall-to-wall left wing comics on both sides of the pond. https://t.co/zTtWRW5354

“As a mother, a wife, and a human being, that photo is very disturbing,” the first lady said in a Wednesday statement, according to reports.

“When you consider some of the atrocities in the world today, a photo opportunity like this is simply wrong and makes you wonder about the mental health of the person who did it,” Melania Trump said.

Despite her apology – after her ultimate act of virtue signaling by holding up the blood-soaked head of the president backfired – President Trump and his family failed to find the humor in this heinous act. 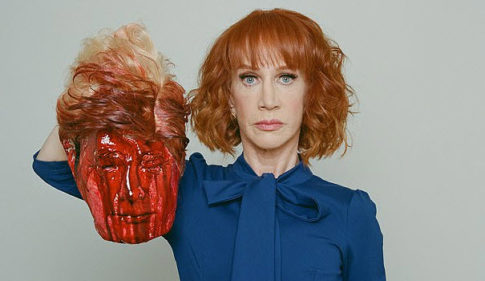 Disgusting but not surprising. This is the left today. They consider this acceptable. Imagine a conservative did this to Obama as POTUS? https://t.co/QdghcbIjS7

And this morning the President himself reacted…

Kathy Griffin should be ashamed of herself. My children, especially my 11 year old son, Barron, are having a hard time with this. Sick!

We are sure this outrage will be seen as some badge of honor for the New Year’s Eve counter-downer, but perhaps we should reflect on what this really means. As Martin Armstrong writes…

While Kathy Griffin apologizes for going tooooo far, that is obviously only because of the flack she got for even doing this photo.

If it were Obama, she would be called a racist. The mere simple act of doing something like this is exposing just how dangerous the future truly is. We have the left who thinks it is their God given right to suppress if not kill anyone who disagrees with them. I for one am starting to lean for the break up of the United States and all the leftists please move to the left of the country and anyone else who wants freedom from these insane people, move to the right.

They never heard of freedom and that means to enjoy your own life, liberty and the pursuit of happiness without being told what to do by people who want to rule the world their way. I have always had a simple motto – live and let live. I ask for nothing but freedom from oppression. Tyranny is what these people preach. It is their way or no way. We need to separate or there will be blood in the streets.

It’s very simple. I fully agree with Patrick Henry. They have no right to subjugate the 50% they seem to hate so much.