– The Manchester Attack – A Blowback From Britain’s Terror Support In Libya, Syria And Beyond:

When I first learned of yesterday’s terror incident in Manchester, UK I snarked:

Moon of Alabama‏ @MoonofASo another heroic “Syrian rebel” – which the British government avidly supports – blew himself up. But why in #Manchester?

How would I know it was a “Syrian rebel” who blew himself up in the Manchester Arena?

Well, how would you know that any of the takfiri “Syrian rebels” the UK, the U.S. and their Gulf proxies support in Syria are from Syria? Many are definitely not.

Then news appeared that the attacker’s name was Abedi and that he hailed from an anti-Ghaddafi tribe in eastern Libya. It was eastern Libya from where in Macrh 2011 a tribal insurrection to overthrow the Libyan government was initiated. Weapons were flown in from Qatar and handed out to Jihadists. British special forces were on the ground to help the takfiris of the Libyan Islamic Fighting Group (LIFG) in their attacks towards the Libyan capital in western Libya. The leader of the eastern front was Abdelhakim Belhadj, a long time al-Qaeda member, After Ghaddafi was overthrown with British help al-Qaeda’s flag went up over the court house of the eastern Libyan city of Benghazi. 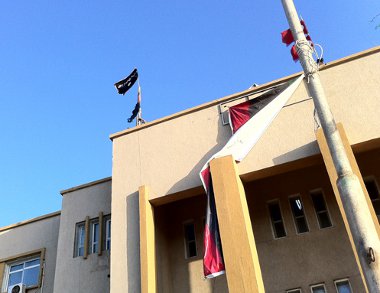 Now we read this:

The suicide bomber who killed 22 people and injured 59 more at an Ariana Grande concert in Manchester was a university dropout who may have made secret trips to Syria to train for the attack.
…
UK police revealed, Mr Abedi was a 23-year-old British national of Libyan descent. He was born in Manchester and grew up alongside three siblings.British intelligence agents are investigating reports the football-obsessed Abedi slipped into Syria while visiting relatives in Libya several times in recent years, The Sun reports.

Abedi born in Manchester and grew up in tight-knit Libyan community that was known for its strong opposition to Colonel Muammar Gaddafi’s regime.He had become radicalised recently – it is not entirely clear when – and had worshipped at a local mosque that has, in the past, been accused of fund-raising for jihadists.
…
A group of Gaddafi dissidents, who were members of the outlawed Libyan Islamic Fighting Group (LIFG), lived within close proximity to Abedi in Whalley Range.

The Islamic State, a splinter part of al-Qaeda, has claimed responsibility for the attack in Manchester. The LIFG was aligned with al-Qaeda.

Salman Abedi was in east-Libya when the UK bombed Libyan government troops to free the way for the onslaught of the takfiris:

A person who said they knew Abedi from school told the Manchester Evening News: “He was a outgoing fun guy but since he went to Libya in 2011 he came back a different guy.“He used to drink, smoke weed then all of a sudden he turned religious and I’ve not seen him since 2012.”
…
“There was a black flag with Arabic writing on it on the roof [of Abedi’s house in Elsmore road] for a bit, a few years ago,” a neighbour told the BBC.

It was under Secretary of State Hillary Clinton that a pipeline of Takfiri Islamist and weapons from Libya to Syria was organized. The British government surely knew and helped with this.

It is fairly obvious that the Manchester attack is a blowback of the British wars on the independent Libya under Ghaddafi and on the independent Syria under Bashar Assad. In both cases the British government supports radical Islamist takfiris to fight against the secular governments it wants to overthrow. But such extremists can never be controlled by the “west”. They hate the “west” on ideological grounds and they hate what “we” do to their home countries. Any use of such forces abroad will blow back home.

I have seen suggestions that the attack in Manchester was initiated by “deep state” Gladio forces to help Theresa May win the British election. That is possible -British secret services knew the culprit well- but it is unlikely in my view. May is predicted to win by a wide margin and there is no need to take the risk such a plan would inevitably entail. A blowback from supporting takfiri terrorists in foreign countries is the much more likely explanation.

But don’t expect the government supporting main stream media to explicitly point out that obvious connection. They are all part of the campaigns for the Takfiris when these try to overthrow this or that secular government. They are all guilty themselves of causing the Manchester attack.

“Could the Witch of May’s enthusiasm to dispose of Ghaddafi, then treat the covertly trained local back-up as disposable fodder, be back-firing on her?

It’s fair game he was conveniently allowed to do this in the interest of ultimate May power, but his reasoning will not be unique, and others, intent on a more focused revenge might go for the real target, be it mr. vague or her, both instrumental.”

5 thoughts on “The Manchester Attack – A Blowback From Britain’s Terror Support In Libya, Syria And Beyond”