Every winter, trees on high mountains in a small area northwest of Mexico City turn orange. Close inspection reveals branches filled with brilliantly colorful monarch butterflies, rather than fiery leaves, as the eastern North American population of monarchs winters there. 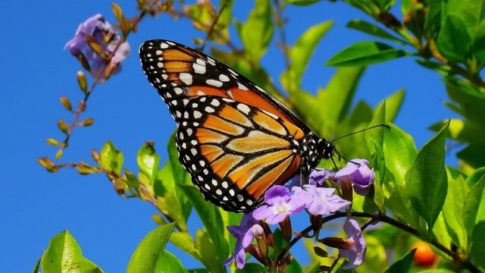 Their numbers, however, are shrinking. New research at Michigan State University, published in the current issue of the journal Ecography, makes a strong case that the reasons for this decline go far beyond what’s happening on the wintering grounds and addresses a current controversy about the primary causes of the specie’s decline.

“We need to think of migratory species at regional scales to truly understand how changes in climate and land use affect population trends,” said Elise Zipkin, MSU integrative biologist and co-author. “Global declines in migratory species, including monarchs, suggest that broad-scale conservation action may be necessary to prevent the loss of migratory populations.”

In that vein, the research team incorporated features from the butterflies’ complex continental movements to study the factors influencing summer populations in Illinois using data from a long-term citizen science monitoring program. Unlike other migratory species, which have distinct summer and winter grounds, monarchs take multiple generations to travel from Mexico to Texas, from Texas to the Midwest, from the Midwest and into Canada, and finally, back from the upper Midwest and Canada to Mexico.

“The connection between population dynamics from winter to spring to summer is more complex than in other species,” she said. “Our study provides the first empirical evidence of a negative association between glyphosate application and local abundance of adult monarch butterflies during 1994-2003, the initial phase of large-scale herbicide adoption in the Midwest.”

Glyphosate, a key ingredient found in Roundup and other herbicides, may be a contributing cause of population decline due to its ability to reduce milkweed plants. While milkweed serves as the host plant for monarch eggs, the extent in which milkweed loss affects monarch trends is still controversial, she added.

Along with the impacts of herbicides, the study examined the effect of surrounding crop cover in summer habitat as well as cross-seasonal effects of spring weather fluctuations in Texas and population changes on the wintering grounds in Mexico.

“Butterflies face myriad challenges, and habitat loss and climate change are clearly important pieces of it,” Zipkin said. “Our long-term goal is to examine the many stressors on monarchs across all seasons and identify which ones are the most critical. Future research could then offer solutions on how to develop effective conservation strategies.”

The team’s research could generate answers that eventually help reverse the nearly 20-year decline of monarch butterflies observed in Mexico. It gives hope to anyone, scientists and the public alike, who has ever witnessed the mass of overwintering butterflies in Mexico or cheered a flitting monarch as it traverses vast distances across the United States.

“Migration – whether it’s undertaken by the smallest insects or the largest mammals – is a captivating phenomenon,” Saunders said. “We hope that our study sheds light on how events and conditions during different stages affect the monarch butterfly’s annual cycle as well as provides findings that can inform future conservation efforts.”