I want to add, again, that TPTB are preparing us for the coming civil war in Europe (and the US), which will most probably start after the coming financial collapse.

“Another rat in the nest. How come an anonymous US official named the (presumably obliterated) bomber within 4 hours of the explosion?

Did he really exist?

Not trying to be callous, but are there really 22 dead? I just don’ believe or trust government anymore.” 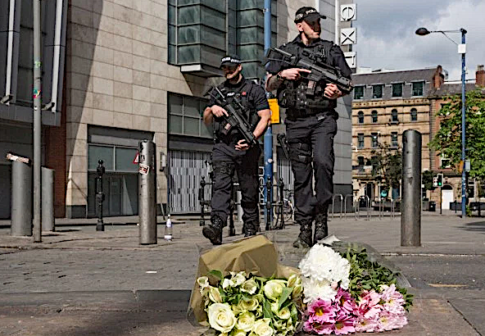 Manchester Bombing: What We Don’t Know:

On 22nd May at approximately 22.30hrs a bomb was detonated at the Ariana Grande Manchester Arena concert, Manchester, UK. Much has emerged in the national press and television media over the incident. There are some things though that we don’t know.

In the early hours of the morning of the 23rd May – approximately 02.35BST   NDTV via the Washington Post stated quite categorically that:

“U.S. officials, speaking on the condition of anonymity, identified the assailant as Salman Abedi. They did not provide information about his age or nationality, and British officials declined to comment on the suspect’s identity.”

This was published at a time when British police and security services were refusing to make any statements as to who they thought the perpetrators were because at the time, they were dealing with the immediate aftermath of the event.

Quite how unnamed  ‘US Officials’ wishing to remain anonymous correctly identified the exact individual exactly four hours after the incident from 3,500 miles away is anyone’s guess, particularly when British police and security services continued to make no such statement.

At around the same time this tweet appears from columnist/lobby correspondent at The New York Observer Andre Walker. There is probably a good reason why he is in Manchester. He clearly states on his Twitter account that this image is FAKE. I am reliably informed that the image is in fact the Manchester Arena exit doors from straight after the bombing and the devastation is evident. How this journalist got this image quite so fast without actually being there just two minutes after Greater Manchester Police put out a Tweet stating that they were now responding to serious incident is difficult to understand. 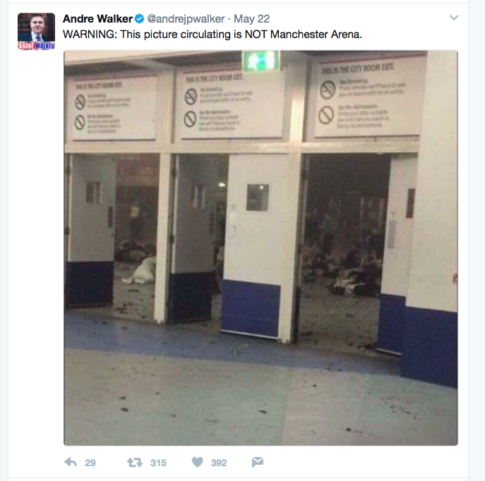 75 minutes after the incident happened not one single journalist from Sky News or the BBC was anywhere near the scene. This could be for all sorts of valid reasons, not least because the police may well have cordoned off the area. But reports on both Sky and the BBC were very sketchy and confused. Yet two minutes from the incident itself a reporter from an American media outlet, issues images of the carnage (that are not retweets according to his own account).

According to an eagle eyed and well known blogger, Andre Walker’s employer is no less than Donald Trump’s son-in-law Jared Kushner. And that after numerous emails and requests for information

“André’s gone to ground: he hasn’t responded to tweets and emails.”

Just before 06.00 hrs 23rd May, Greater Manchester police are sure that there is one perpetrator and that he is male and blew himself up in a suicide mission. They confirm that there are 22 victims who died and 59 others with injuries at hospitals. No names are mentioned.

Less than an hour later GMP are also appealing for witnesses and any dash-cam or mobile footage to help with their enquiries.

At 06.53 hrs Greater Manchester police release first official information that they have made an arrest – but still no names.

Much speculation from the media gets underway. Is the arrest significant? Some of the media speculation is quite vile and politically charged.

Last night The Guardian confirms at 23.18 that

“Police confirmed the 22-year-old’s identity after officials in the United States passed it to news reporters, apparently against the wishes of the British police and security services.”

Salman Abedi is now officially identified and named as the suicide bomber.

Sky News reports this morning (24th May) that there are 14 people still missing, mostly teenagers but among them several adults. Sky also reports “meanwhile, there are a number of Polish citizens that are also among the missing.”

The police are satisfied that the whereabouts of all unaccompanied children are now known.

Some ten hours after the incident took place we have 22 confirmed dead and 59 in hospital. But 14 plus missing. This will no doubt unfold with time. Let us hope that they all turn up safe and well.

The latest (06.01hrs) is that four of the 14 missing have now been identified and unfortunately passed away.

The bomb used was clearly highly sophisticated and had huge explosive power, especially if more dead are being identified some 30 hours after the incident.

The BBC reports that “The UK has not seen a bomb attack like the Manchester outrage since 2005 for three simple reasons:

The BBC also reports that:

For more than a decade, the BBC Home Affairs Unit has monitored every single terrorist incident, attempted or failed, that has made it into the public domain.

Quite simply, most of the people we have seen dragged through the courts are not capable of this kind of incident. Many aspire to “martyrdom” and talk about building bombs.

But they are either, to be frank, too stupid and disorganised to turn their fantasies into reality or, alternatively, they get caught because they don’t know how to cover their tracks.

Most jihadists discount a bomb attack at the early stages: they realise that it’s too difficult to pull off. They might accidentally kill themselves while making the device. Their purchasing patterns might raise suspicions in a local pharmacy or, online, prompt GCHQ to have a closer look at their digital life. They may turn to someone else for help who, unbeknown to both, is already on the MI5 radar.

A number of news outlets are reporting that Salman Albedi could not have acted alone. This seems plausible as it is less likely that a quiet 23 year old would have managed this atrocity on his own. That means quite possibly more trouble ahead if co-conspirators are not quickly apprehended.

Abedi is known to have traveled to Libya. It is reported one of his friends was killed by a drone in Syria.

This is the thirteenth major terrorist incident in Europe in just two years – that collectively has seen the murdering of over 300 innocent civilians and thousands injured. By comparison, the United States has suffered with fewer than 100 terrorist related deaths, since the Sept. 11, 2001, attacks. This is because America, largely responsible for attacking a number of countries across the Middle East is safely located on the other side of the planet. Europe is on the doorstep of all this carnage.

There is much that still don’t know about this particular atrocity and how many more we will have to endure. There seems to be some interference of a sorts by Washington in this incident – again, one can only speculate. Perhaps reading this might connect a few more dots BREXIT: Proof That Britain’s EU Referendum Was Rigged. This article confirms the extent of outrageous and illegal American interference in British politics recently.

We don’t know why people off the radar of the security services such as Abedi and the 7/7 bombers was such that atrocities are possible when so much organisation and capability is required.

One thing we do know. This attack, and the twelve others across Europe is called ‘blowback’ – defined as “the unintended adverse results of a political action.”

It was the politician’s who took Britain to the middle East and north Africa and blew up Libya then Syria. At the time Libya, one of the wealthiest nations in the region which had free healthcare, full education and employment and less poverty than Denmark was considered one of the most moderate – the same can be said of Syria. Both countries infrastructure has all but collapsed. Both countries are now overrun by head-chopping extremists, killers and psychopaths. Both leaders of those countries might have been brutal to get into power and keep it but both lived in regions where brutal leadership is generally required to keep the peace – that much is clearly evident.

This is what happens when illegal, unjustified attacks on sovereign nation’s occur and hundreds of thousands of innocent victims are killed, maimed or displaced. Why Britain’s politician’s seem unable to grasp this simple fact is beyond normal basic understanding of humanity. They are at fault and have the blood of every single one of these young innocent lives on their hands.

Libya is where Albedi’s family originated – Syria and Libya and Iraq too is the centre of the biggest terror networks in history. The dots are not hard to connect are they?

“Furthermore, this is The Maywitch’s perfect opportunity to start martial law in increments, leading to MRAPS in every town once the economic crash starts.”

– TODAY’S COLUMN: Troops on the Streets of Britain, More Rightwing Anger Towards Muslims:

The UK inched closer towards martial law today, as Prime Minister May announced that British troops will be deployed on the streets in the aftermath of Monday night’s alleged ‘ISIS terror attack’ in Manchester.

Along with the government’s ramping-up of police state measures, the UK arm of the ‘Alt-Right’ appear to be inciting street confrontations with British Muslims – labeling them as “enemy combatants.”

1 thought on “Manchester Bombing: What We Don’t Know – TODAY’S COLUMN: Troops on the Streets of Britain, More Rightwing Anger Towards Muslims”