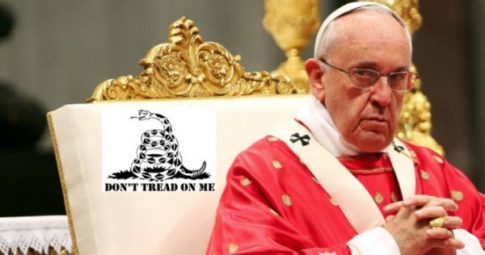 – Pope Francis Lashes Out At “Grave Risks” Of Libertarianism:

The purported pope of the Catholic Church recently attacked “libertarianism.”  As a number of theologians have ably shown, Jorge Bergoglio, a.k.a Pope Francis, cannot be a legitimate pope since he was neither ordained as a priest or consecrated as a bishop in the traditional Catholic rite of Holy Orders.  And, since he is not a bishop, he cannot be “bishop of Rome” – a prerequisite for being the head of the universal Church.

While “technically” he is not the pope, Bergoglio is a notorious heretic who has said a mind-boggling number of heresies, engaged in the most scandalous of actions, and has attempted to change doctrine and Church teaching.  He is not the pope since a heretic is necessarily outside the Church and, thus, cannot hold ecclesiastical office, especially that of supreme pontiff.

If Bergoglio’s “invalidity” is not damnable enough, “Pope Francis” is a neo-Marxist who has repeatedly called for the redistribution of wealth, promoted mass migration, and has denigrated capitalism, accusing it of impoverishing the poor.

Naturally, with such a dossier, Bergoglio would be hostile to the concept of libertarianism.  And, as a skillful demagogue, he has deliberately mischaracterized the subject.

In a message to a meeting of the Pontifical Academy of Social Sciences, Bergoglio harshly stated:

“I cannot fail to speak of the grave risks associated with the invasion of the positions of libertarian individualism at high strata of culture and in school and university education.”*

If Bergoglio thinks that higher education is infected with “libertarian individualism,” he is more delusional than he has been given credit for!  Academia has long been a bastion of collectivist thought.  Libertarianism and, for that matter, conservative ideas have little voice in higher education.  Moreover, Western culture is dominated by the ideals of social democracy, a philosophy that is anathema to libertarianism and also to real Catholicism, not the kind that is preached by imposters such as “Pope Francis!”

It is probably deliberate that Bergoglio uses the word “invasion” in his description as he subtly mocks his audience.  The only invasion that has happened is not a takeover of academia by free-markets zealots, but by the millions of “asylum seekers” that have been thrust upon European soil which has been encouraged and orchestrated by the likes of multiculturalists such as Jorge Bergoglio.

“[T]he libertarian individual denies the value of the common good,” Bergoglio continues, “because on the one hand he supposes that the very idea of ‘common’ means the constriction of at least some individuals, and on the other hand that the notion of ‘good’ deprives freedom of its essence.”

Of course, to arch collectivists like “Pope Francis,” the common good always trumps individual rights.  While he does not explicitly say it, the “common good” means for the good of the state, and for those who place their own self interest or that of their family before the state’s interest, they are to be ostracized or worse.

Libertarianism to Bergoglio is an “antisocial radicalization of individualism” that “leads to the conclusion that everyone has the right to extend himself as far as his abilities allow him even at the cost of the exclusion and marginalization of the more vulnerable majority.”  By living “independently of others” a person can attain freedom.

Once again, as he had done throughout his “papacy” Bergoglio demonstrates that he is an economic ignoramus who does not grasp a basic tenet of social relationships.

Libertarians are proponents of the market economy and markets are the result of the division of labor, specialization, and exchange.  Society, in part, is the amalgamation of numerous markets and advanced societies are ones with a highly developed division of labor.  Overwhelming empirical evidence has shown that such societies are not only richer, but are more culturally advanced than self- sufficient societies (autarky) where individuals produce everything for themselves.

In such an order, an individual produces or provides services which he does best.  Since he does not produce everything himself, he, therefore, depends and needs to interact with others in exchange of goods he does not produce.  In the market economy, very few live “independently of others” as Bergoglio stupidly believes, but must rely and depend on their fellow man.  Even entrepreneurs, who Bergoglio implicitly condemns in the above passage, have to rely on consumers to patronize their products and services or they will quickly go out of business.

Bergoglio, of course, does not understand that there are many shades of libertarianism running a wide spectrum of social, political and economic thought.  If there is a common theme among libertarians, it is opposition to the modern state and the welfare/warfare system upon which it rests.  The modern state will not tolerate any competition for the minds, hearts, and souls of men.

Until the Second Vatican Council (1962-65), the Church recognized that the modern state was not only its enemy, but the enemy of mankind.  In this respect, the Church had common ground with the libertarian and conservative movements of the 20th century.

The Second Vatican Council and the “reforms” which came in its wake produced an environment that has led to the likes of cretins like Jorge Bergoglio who has not only repeatedly blasphemed the Divine Founder of the institution in which he supposedly heads, but regularly spews out all sorts of discredited neo-Marxist nonsense.

While “Pope Francis” condemns libertarianism, the solution to the financial, political, and many of the social problems which confront the Western world will only be solved by “libertarian means” – a gold/silver monetary standard, political decentralization/secession, de-militarization/non-intervention, free trade, and the application of private property rights to the migration crisis.

For the good of mankind, not only should Jorge Bergoglio be ignored as supreme Roman pontiff, but he should likewise be ignored when speaking on any and all public policy matters.