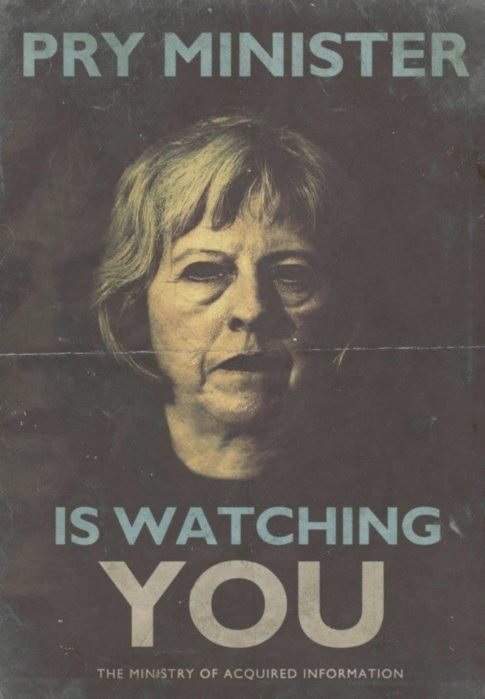 – UK Government Moves Aggressively to Censor and Control the Internet:

I’ve got family in town, so today’s post will be brief.

I’ll just leave you with the following dystopian excerpts from today’s UK Independent article titled, Theresa May to Create New Internet that Would Be Controlled and Regulated by Government:

Theresa May is planning to introduce huge regulations on the way the internet works, allowing the government to decide what is said online.

Particular focus has been drawn to the end of the manifesto, which makes clear that the Tories want to introduce huge changes to the way the internet works.

“Some people say that it is not for government to regulate when it comes to technology and the internet,” it states. “We disagree.”

Thanks for clearing that up.

Senior Tories confirmed to BuzzFeed News that the phrasing indicates that the government intends to introduce huge restrictions on what people can post, share and publish online.

The plans will allow Britain to become “the global leader in the regulation of the use of personal data and the internet”, the manifesto claims.

It comes just soon after the Investigatory Powers Act came into law. That legislation allowed the government to force internet companies to keep records on their customers’ browsing histories, as well as giving ministers the power to break apps like WhatsApp so that messages can be read.

The government now appears to be launching a similarly radical change in the way that social networks and internet companies work. While much of the internet is currently controlled by private businesses like Google and Facebook, Theresa May intends to allow government to decide what is and isn’t published, the manifesto suggests.

The manifesto even suggests that the government might stop search engines like Google from directing people to pornographic websites. “We will put a responsibility on industry not to direct users – even unintentionally – to hate speech, pornography, or other sources of harm,” the Conservatives write.

“Other sources of harm.” Can’t wait to see the ever-expanding government definition of that.

Perhaps most unusually they would be forced to help controversial government schemes like its Prevent strategy, by promoting counter-extremist narratives.

The manifesto also proposes that internet companies will have to pay a levy, like the one currently paid by gambling firms. Just like with gambling, that money will be used to pay for advertising schemes to tell people about the dangers of the internet, in particular being used to “support awareness and preventative activity to counter internet harms”, according to the manifesto.

The Conservatives will also seek to regulate the kind of news that is posted online and how companies are paid for it. If elected, Theresa May will “take steps to protect the reliability and objectivity of information that is essential to our democracy” – and crack down on Facebook and Google to ensure that news companies get enough advertising money.

If internet companies refuse to comply with the rulings – a suggestion that some have already made about the powers in the Investigatory Powers Act – then there will be a strict and strong set of ways to punish them.

Given how willing tech companies have been to comply with government spying in the past, it’ll be interesting to see how they respond to this dangerous, authoritarian power grab.