– U.S. Attacks Syrian Government Forces – It Now Has To Make Its Choice:

The Syrian army is on the way to liberate the ISIS besieged city of some 100,000 and garrison of Deir Ezzor in the east of the country. The U.S. has trained a few thousand “New Syrian Army” insurgents in Jordan and is reportedly prepared to march these and its own forces from Jordan through the east-Syrian desert all the way up to Raqqa and Deir Ezzor. About a year ago it occupied the al-Tanf (al-Tanaf) border station which consists of only a few buildings in the mid of the desert. The station between Syria and Iraq near the Jordan border triangle was previously held by a small ISIS group.

A U.S. move from the south up towards the Euphrates would cut off the Syrian government from the whole south-east of the country and from its people in Deir Ezzor. While that area is sparsely populated it also has medium size oil and gas fields and is the land connection to the Syrian allies in Iraq.

With the western part of the country relatively quiet, the Syrian government and its allies decided to finally retake the south-eastern provinces from ISIS. They want to lift the ISIS siege on Deir Ezzor and close the border between Syria and Iraq with its own forces. The move will also block any potential U.S. invasion from the south by retaking the road to al-Tanf and the Syrian-Iraqi border (red arrows). The sovereign Syrian state will not give up half of the country to an illegal occupation by ISIS or the U.S. At the same time as the eastern operations are running consolidation and clearing operations against ISIS in the middle and west of the countries will take place (green arrows). 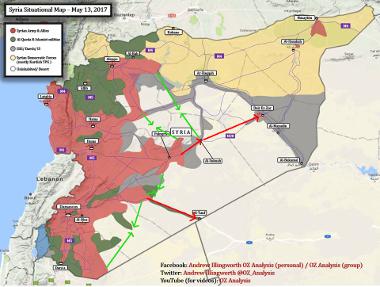 Yesterday a small battalion size force (~2-300 men) of the regular Syrian army, Syrian National Defense Organization volunteers and Iraqi Popular Mobilization Forces (PMF/PMU of the Kata’ib al-Imam Ali) marched on the road from the west towards al-Tanf. They were about 23 kilometers away from the border station when they were attack by U.S. aircraft coming in low from Jordan. The U.S. jets directly fired at the convoy, allegedly after earlier giving some “warning shots”. At least one Syrian tank and several other vehicles were destroyed. Six Syrian government forces were reported killed and more were wounded.

The U.S. command claimed that this was a “defensive” move to “protect” its soldiers at the al-Tanf station. There are U.S. and British special forces stationed near the station who lead and train the NSA contingent – all together a few 100 men.

The U.S. attack was clearly a willful, illegal attack on Syrian ground against legitimate forces of the sovereign Syrian government. (The Iraqi PMU contingent in Syria is a legitimate allied force under control of the Iraqi prime minister.) There is no clause in international law, no U.N. resolution or anything similar, that could justify such an attack. The U.S. military has no right at all to be at al-Tanf or anywhere else in Syria. There is nothing to “defend” for it. If it dislikes regular Syrian and Iraqi forces moving in their own countries  towards their own border station and retaking it, it can and should move out and go home. Moreover – the U.S. claims it is “fighting ISIS” in Syria. Why then is it attacking the Syrian government forces while these launch a large move against the very same enemy?

The coalition led by the U.S. military claimed it asked Russia to intervene and that Russia tried to deter the Syrian force to move towards al-Tanf. I am told that this claim is incorrect. Russia supports the Syrian move to the east and the retaking of the border. The move will be reinforced and continue. The revamped Syrian air defense will actively protect it. Russia will support it with its own forces if needed.

The illegitimate occupation forces, the U.S. and British forces and their proxies, will have to move out of al-Tanf or they will have to directly fight the Syrian government forces and all its allies. They have no right to be there at all. The Iraqi PMU in Syria, some of which were hurt in yesterday’s U.S. attack, are an active part of the coalition against ISIS in Iraq. If the U.S. fights it in Syria it will also have to fight it in Iraq (and elsewhere). Russia is able and willing to reinforce its own contingent in Syria to help the government to regain the Syrian east.

The U.S. has no legitimate aim in Syria. It is somewhat tolerated in the north-east where it helps Syrian-Kurdish forces to fight ISIS and to liberate Raqqa. That does not give it ANY right to occupy Syria’s east or to attack Syrian government forces. When Raqqa is done all U.S. forces in the north-east will have to again move out.

Together with its many subordinate NATO and Gulf allies the U.S. has the military and economic power to destroy the Syrian military. It can eliminate the Syrian government under President Assad and occupy the whole country. That would be a large war which would probably escalate into a global fight against Russia, Iran and other countries. It would necessitate a several decades long follow-up occupation for “nation building” while constantly fighting against a large al-Qaeda aligned Takfiri insurgency in Syria and all its neighboring countries (especially in Lebanon, Jordan and Turkey where U.S. friendly governments would fall). The war would cost several trillion U.S. dollars, a large number of casualties and cause decades long chaos in a geo-politically sensitive region.

The U.S. has a simple choice: Either go in with full force and bear the above consequences, or concede to the sovereign Syrian government and its allies and coordinate with them to retake the country from ISIS and al-Qaeda. This will have to be done as they, not the U.S., see it proper to do. To believe that the U.S. can take the east and convert into some peaceful vassal statelet is pure fantasy. Way too many regional forces and interests are strung against that. There is little grey between these black and white alternatives.

The only tactically thinking U.S. military and intelligence services will try to avoid to choose between these. They will use their Jihadist proxy forces in west-Syria to break their current ceasefire with the Syrian government side and launch a diversion for their moves into the Syrian east. The Syrian government would then probably have to delay its larger operations in the east.

But that would not change the strategic situation. The choice the U.S. people and their government have to make will still be the same. The point in time to finally accept it may move out a few month while the fighting escalates and causes more damage on all sides. The choice would still be the same. It is all-in or out. The best time to take it is now.

There are some maps flowing around which assert that Iran is seeking a military land communication route via Iraq into Syria and beyond. They show some fantasy route up north through Iraqi and Syrian Kurdish territory as the “current route” and the roads between Damascus and Baghdad as “future route”. The claim is that military equipment moves along these roads.

It is nonsense. Iran did not and does not need such land routes for military exchanges with its allies in Syria and Lebanon. Where was that Iranian land route in 2006 when the U.S. occupied Iraq while Israel attacked Lebanon? Where was that land route when ISIS occupied half of Iraq and Syria? There was no such route and Iranian support still reached Hizbullah in 2006 and later Syria. It came by air, by ship and, most important, by other means.

By holding up such fantasy maps certain interests want to insinuate that the area is “strategically important” for the U.S. and that the U.S. must therefore occupy south-east Syria. It is true that the road network between Syria and Iraq has some economical importance. Like all roads these are used for local commerce. But history demonstrates that they are not militarily strategic asset in the sense of an essential, overarching need.