Over the past week a lot of digital ink has been spilled trying to preview and predict what will take place during Trump’s first official mammoth visit abroad, when over the next 8 days after an overnight flight on Air Force One, Trump will hopscotch from Saudi Arabia to Israel to the Vatican. He’ll close his trip with a pair of summits in Brussels and Sicily. The stakes are great for Trump who makes his debut on the international stage: he’s the first president since Jimmy Carter to not travel abroad during his first 100 days in office. And he’ll depart under a cloud of controversy, even as his media troubles intensified with fresh news on the Russia probe and his “Comey is a nut job” remark. 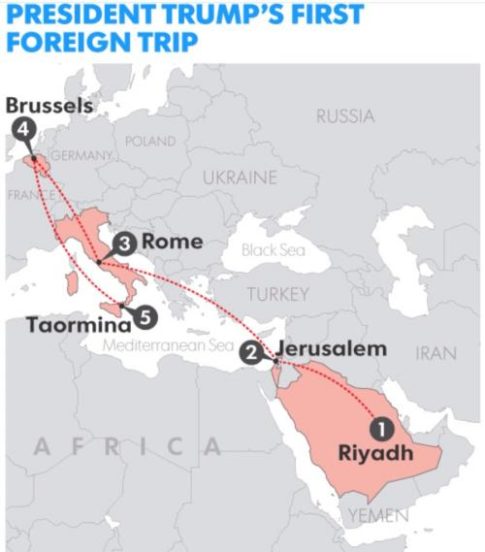 There is just one problem with all of these nuanced, carefully constructed previews of Trump’s trip: they will all end up wrong, as there is simply no possible way of knowing or predicting all the potential permutations that could emerge from unleashing one President Trump upon the world.

What we do know, however, is that never before has so much planning and organization gone into the diplomatic visit by a US head of state (and not only: nearly all of Trump’s senior White House officials are traveling with him. First lady Melania Trump will also be on the trip, headlining her own events on each stop). Because while readers may have heard of armored vehicles for world leaders and A-list celebs, Trump is about to get his own armored hotel suite.

According to NBC, as part of Trump trip, an unprecedented security operation has been launched that aims to envelop the president and his 1,000-person entourage during his visit to Jerusalem and Bethlehem next week. Trump’s accommodation during the second stop on his trip will be a bomb-proof, poison gas-proof and bulletproof hotel room built to withstand the collapse of the entire building, according to Sheldon Ritz, operations manager for Jerusalem’s King David Hotel.

Speaking to NBC, Ritz said that “the presidential suites have independent air conditioning in case of a gas attack and are built to withstand a RPG [rocket-propelled grenade],” he said of the super-luxurious suites that cost around $5,700 per night. “But still the U.S. is bringing rocket-proof glass to put in front of the window.”

“If the whole hotel blows up the suite will come down in one piece, so maybe a few broken bones, but they will be alive,” said Ritz, adding that the King David would become a “mini White House.”

That probably won’t happen: in order to prevent explosives-laden cars from ramming the hotel, two buses full of heavy equipment will be placed at the entrance to the main road. Balloons carrying infrared cameras will float above the building while bomb-spotting robots will lurk in sewers beneath it.

Then there’s the food: every piece of food meant for Trump certified as safe, with a tester overseen by Israeli and U.S. security officials perusing every meal destined for the President and his family. The hotel, which has been targeted before, most famously in 1946 when militant Zionists fighting for an independent state bombed the building and killed 91, is only part of the plan to safeguard the president. Israel’s Operation “Blue Shield” will involve undercover police, special patrols, motorcycle officers, sniffer dogs and helicopters.

Meanwhile, Trump will be surround by a veritable army as more than 10,000 police officers will be tasked with securing his trip throughout Jerusalem, a place which is not exactly known for its peace and stability: “The level of security will be at its highest,” said Micky Rosenfeld, a spokesman for the Israeli police. “It is a top priority that there is close coordination with the U.S., making sure the visit goes exactly according to plan.”

Across the border in Palestine it will be more of the same: Palestinian officials also said they were working with the U.S. on logistics, such as Trump’s crossing from Jerusalem to Bethlehem and meeting with Palestinian leader Mahmoud Abbas. “All the roads he will be passing through will be secured and emptied of vehicles,” said Maj. Gen. Adnan Damiri, the spokesperson for the Palestinian security forces. “Armored cars and police dogs trained to detect explosive materials will be used in cooperation with American security.” In advance of Trump’s departure, NBC writes that on Thursday a full-blown U.S. airlift had begun. Laden with equipment and dozens of vehicles, around 30 C-17 military planes arrived in Israel.

To be sure, the threat level surrounding Trump’s first foreign trip is unprecedented which explains the precautions. According to Israeli emergency services, some 48 Israelis have been killed and 608 wounded in attacks by individual Palestinians since August 2015 — the latest bout of violence. During the same period, around 260 Palestinians were killed by Israeli forces and more than 18,000 wounded, according to Palestinian officials.

Also, it’s not just Trump: the president’s entourage also includes his wife Melania, daughter Ivanka and, of course, Jared Kushner. Trump, who professes to have an exceptionally warm relationship with Israel, will also be traveling to the occupied West Bank city of Bethlehem. Trump has said he is hoping to broker a peace deal between the Palestinians and Israelis, a feat that has eluded world leaders for decades.

Meanwhile, back at the King David, workers are preparing for Sunday when the U.S. delegation will transform the hotel into a fortress ahead of the president’s arrival the following day. The hotel’s 233 rooms will be occupied not only by Trump and his family but also the U.S. Secret Service, Army Rangers, Navy SEALs, as well as Israeli security officials, according to Ritz. He added: “Nothing is taken for chance so Trump and his family will be very safe.”

Having covered the Israeli and Palestinian legs of Trump’s tour, here is a quick preview of what to expect in Saudi Arabia and the other countries on his itinerary, courtesy of AP, which informs us that when President Donald Trump sits down for dinner in Saudi Arabia, caterers have ensured that his favorite meal – steak with a side of ketchup – will be offered alongside the traditional local cuisine.

In Saudi Arabia, people with knowledge of the planning for Trump’s trip say the caterers are planning to offer the president steak and ketchup alongside the lamb and hefty portions of rice on the menu. All the meat will have been butchered in a Shariah-compliant halal manner as per Islamic custom. Appropriately, we learned this from even more anonymous sources: “The people with knowledge of the Saudis’ planning insisted on anonymity because they were not authorized to disclose the sensitive details.”

At NATO and the Group of 7 summits, foreign delegations have gotten word that the new U.S. president prefers short presentations and lots of visual aids. And at all of Trump’s five stops on his first overseas trip, his team has spent weeks trying to build daily downtime into his otherwise jam-packed schedule.

It’s all part of a worldwide effort to accommodate America’s homebody president on a voyage with increasingly raised stakes given the ballooning controversy involving his campaign’s possible ties to Russia. For a former international businessman, Trump simply doesn’t have an affinity for much international.

Even before Trump’s trip morphed from a quick jaunt to Europe into an eight-day behemoth, White House aides were on edge about how the president would take to grueling pressures of foreign travel: the time zone changes, the unfamiliar hotels, the local delicacies. Potential terrorism. Two officials said they feared that a difficult trip might even lead the president to hand off future traveling duties to Vice President Mike Pence.

“The chance of something going wrong – you insult the hosts, you get sick, your boss gets sick, you miscommunicate with your hosts, you make a scheduling error, you need to change the schedule just hours before a meeting, the motorcade get stuck in traffic, or the plane is stranded due to bad weather – is extremely high,” said Julianne Smith, who served as a foreign policy adviser to Vice President Joe Biden and is now a senior fellow at the Center for New American Security.

“Personally, I think they should cut it back now before they regret it,” she said of Trump’s long jaunt.

In light of Friday afternoon’s coordinated WaPo/NYT bombshells, they may not have the choice to regret it should Trump tell the pilot to just turn the plane around and resume tweeting at sea level.