– Obama Reveals True Thoughts On Trump: “He’s Nothing But A Bullshitter”:

People Magazine decided to dedicate their cover story this month to their beloved “cool, even-keeled, no-drama Barack Obama.”  And even though it will come as surprise to precisely no one, the story apparently includes the “bombshell” revelation that….wait for it…Obama can’t stand Trump…shocking, we know.

According to two anonymous sources friendly with the Obamas, People Magazine revealed that Obama frequently describes Trump as “nothing but a bullshitter”…

“He’s nothing but a bullsh–ter,” Obama told two friends early last November, describing an election night phone call with Trump, in which the businessman suddenly professed his “respect” and “admiration” for Obama—after years of hectoring.

Speaking to PEOPLE for its new cover story on Obama and his wife Michelle adjusting to life outside the White House, the two friends quoted Obama’s blunt assessment of President-elect Trump. And how has Obama’s opinion changed since Trump been in office? “Well,” said one of the sources, “it hasn’t gotten any better.”

…all of which is odd because they seemed so friendly and comfortable in this pic of their first Oval Office meeting. 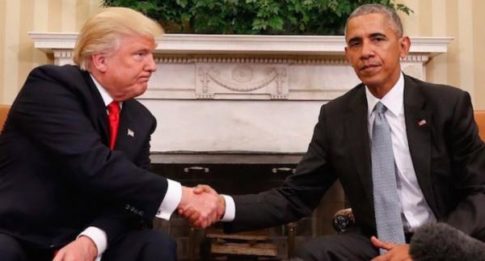 Meanwhile, after hinting that he would lead the opposition movement against Trump, Obama’s friends now say he plans to be “very respectful of the appropriate role of a former president.”  Which we assume can be loosely translated to mean that he’s not interested in playing petty political games when he can focus on making millions of dollars selling 1-hour speeches to Wall Street for $400k a pop.

A third source close to Obama tells PEOPLE: “He’s deeply concerned with what he’s seen. But he’s also optimistic and heartened that citizens aren’t just watching it happen but engaging with neighbors and elected representatives at town halls.”

“He’s very respectful of the appropriate role of a former president and that ex-presidents should not be looking over the shoulder of their successors and commenting on every decision,” says Obama’s long-time friend and political strategist David Axelrod, now director of the University of Chicago’s Institute of Politics.

“President Obama’s predecessor didn’t do that. Obviously, this now is a unique set of circumstances, but my sense is that he’s going to try and respect that tradition while reserving the right to speak out in given moments when things rise to that level.”

Meanwhile, the always classy Michelle Obama apparently takes humor in telling her pals that she’s “going all black for the next couple of years” to mourn the Trump presidency.