– A Slap in the Face to Democracy: Canada’s “Anti-Islamophobia” Motion:

Growing concern in Canada over liberal policies benefitting Muslim extremists sheds light on why an “anti-Islamophobia” bill — proposed in the wake of the deadly January 17 Quebec City mosque attack and approved by parliament on March 23 — spurred such heated controversy there.

Motion 103, tabled by Liberal Party MP Iqra Khalid, a Muslim representing Mississauga-Erin Mills, calls on the Canadian government to “develop a whole-of-government approach to reducing or eliminating systemic racism and religious discrimination including Islamophobia.” Because the bill makes no mention of any other religious group targeted by bigots, it was opposed by most Conservative Party politicians and a majority of the public.

Ahead of what would turn out to be a 201-91 vote in favor of the motion, a petition was circulated asking MPs not to support it. According to the petition, Motion 103 would “lay the groundwork for imposing what is essentially a Sharia anti-blasphemy law on all of Canada.”

“…criticism of Islam would constitute a speech crime in Canada.

“This motion uses the term ‘islamophobia’ without defining it, and without substantiating that there is in fact any such widespread problem in Canada.

“This will lead to ideologically-driven overreach and enforcement against alternative points of view—including mature, reasoned criticisms of Islam.

“That kind of content-based, viewpoint-discriminatory censorship is unacceptable in a Western liberal democracy.”

Meanwhile, citizens bemoaning what they view as the increasing radicalization of Muslim communities in Canada, due largely to the unfettered immigration policies of the government of Prime Minister Justin Trudeau, took to the streets of Toronto, Ottawa and other cities to denounce the bill. This response took place in spite of its being non-binding.

A closer look at Motion 103’s initiator, supporters and other respected Muslim figures in Canada, however, indicates that there is cause for worry.

“Now that Islamophobia has been condemned, this is not the end, but rather the beginning… All of us must work hard to maintain our peaceful, social and humanitarian struggle so that condemnation is followed by comprehensive policies,” wrote Samer Majzoub, a Muslim Brotherhood affiliate of the Canadian Muslim Forum — presumably meaning that the next steps are to make it binding.

According to Islamist Watch’s Josh Lieblein, writing in The Daily Caller:

” …Khalid is a former President of York University’s Muslim Students Association, a student group with documented ties to the Muslim Brotherhood. Similarly, Omar Alghabra is a former director of the Canadian Arab Federation, an association that has published statements in support of terrorist groups Hamas and Hezbollah.

“M103’s supporters in the Muslim community have questionable ties of their own. It has been reported that Samer Majzoub was the manager of a Montreal private school that received a $70,761 donation from the Kuwait embassy, while the National Council of Canadian Muslims (NCCM) – formerly the Canadian branch of the Muslim Brotherhood-linked Council on American-Islamic Relations – published an open letter linking M103 to a wide-ranging campaign aimed at reducing systemic racism and Islamophobia in Canada.

“While the NCCM’s open letter does not directly call for Sharia law or the criminalization of criticism of Islam, it does advance the notion that the famously tolerant nation of Canada must set up anti-racism directorates in each province to track instances of Islamophobia, institute a mandatory course on systemic racism for Canadian high school students, and train its police officers to use bias-neutral policing.”

This attempt to turn free speech on its head in Canada is in keeping with the teachings of the country’s top Muslim cleric, Iqbal Al-Nadvi, chairman of the Canadian Council of Imams, president of the Canadian branch of the Islamic Circle of North America (ICNA) and the Muslim chaplain of the Canadian army.

ICNA is an organization that strives “to build an Exemplary Canadian Muslim Community” by “total submission to Him [Allah] and through the propagation of true and universal message of Islam,” according to Jonathan D. Halevi.

Al-Nadvi, he pointed out, has openly quoted the Islamic Prophet Muhammed asserting, “Jihad will continue till the Day of Judgment.” 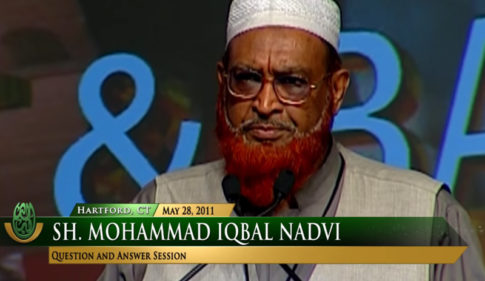 Canada’s top Muslim cleric, Iqbal Al-Nadvi, who is chairman of the Canadian Council of Imams, president of the Canadian branch of the Islamic Circle of North America and the Muslim chaplain of the Canadian army, has openly quoted the Islamic Prophet Muhammed asserting, “Jihad will continue till the Day of Judgment.” (Image source: ICNA video screenshot)

“The objective of Jihad… warrants that one must struggle against Kufr (disbelief) and Shirk (polytheism) and the worship of falsehood in all its forms. Jihad has to continue until this objective is achieved.”

In a piece for Gatestone Institute last October, Canadian terrorism expert Thomas Quiggin pointed to the enabling of, and contribution to, the rise of Islamic radicalism by Prime Minister Trudeau himself. According to Quiggin, Trudeau lauded a mosque in Ottawa, whose imam is part of the International Union for Muslim Scholars, an organization that was placed on the United Arab Emirates list of designated terrorist organizations in 2014. Trudeau called the mosque a shining example of “diversity… within the Muslim community in Canada.”

Two months later, during the days prior to and following the Quebec City mosque attack, a survey revealed that more than half of the citizens of Canada and Quebec consider the presence of Muslims to be a security concern. An even greater majority said they support some form of vetting of immigrants to test their appreciation for Canadian values, and believe that immigrants should integrate into and adopt Canadian culture once they settle in the country.

In this context, the passage by the Canadian Liberal Party establishment of Motion 103, pushed and backed by influential Muslims with radical records, was a slap in the face to democracy — just as its opponents have been claiming.