– Manufacturing Might Come Back to the US, but Robots will Get the Jobs: Apple CEO:

Robots are the Great Equalizer.

Apple has already “created two million jobs in America,” he said in the interview. This includes 80,000 jobs at Apple in the US; plus jobs at US suppliers, such as Corning, which makes the glass for the iPhone and iPad, and 3M, which makes adhesives that Apple uses in its devices; plus the “developer community” of almost 1.5 million people who write apps that, as he said, “change the world.”

So to “get more people to do advanced manufacturing in the US,” he said, Apple is setting up a fund, “initially” putting in $1 billion. “We’re announcing it today,” he said. “We’ve talked to a company that we’re going to invest in already.”

This $1 billion would have to be “our US money which we have to borrow to get, which is another whole topic….” Most of Apple’s cash is registered overseas, the result of profits that have not been taxed in the US. Apple’s overseas cash can be and is already invested in the US, such as in Treasury securities, but it cannot be used for capital expenditures or share buybacks in the US without being “repatriated” under the US tax code and thus triggering an income-tax event.

Apple has made mention of this before – that it would bring some manufacturing back to the US. Other companies have already been doing this. For now, it’s happening on a small scale, but it’s a great thing for the US economy. Every little bit helps. Every little bit is needed. And if President Trump can add some fuel to the fire, that much the better.

But the seven million manufacturing jobs that were lost since the manufacturing employment peak in 1979 won’t come back. They’ll stay in China or Mexico, and eventually, they’ll even disappear there. Automation or robots, or to use Cook’s term, “advanced manufacturing,” which all mean the same thing, will wipe them out.

This chart shows the impact over the past 30 years of “advanced manufacturing” in terms of manufacturing jobs (red line, left scale in millions of jobs) versus manufacturing output adjusted for inflation (black line, right scale, index): 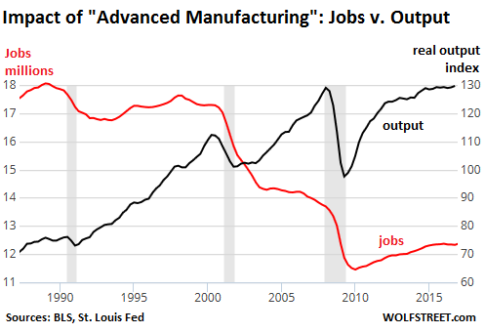 This is the impact of automation: Since Q1 1989, the manufacturing industry has cut 5.7 million jobs, or 32%, yet “real” production (adjusted for inflation) soared by 71%.

The jobs Apple and other manufacturers are creating in their drives for “advanced manufacturing” are highly skilled jobs. They range from highly skilled blue-collar jobs to very specialized robotics and software engineering jobs. Most of these jobs will be well-paid and difficult to fill. And there will only be a relatively small number of them, not millions, and they will replace more and more of what remains of the classic blue-collar jobs.

Companies are not doing it to make America great again. They’re doing it because it makes business sense.

Once automation takes off in “cheap labor” countries like China, these countries lose their cost advantage: robots cost the same anywhere. China has been on the global forefront of investing in robots. Producing in China via “advanced manufacturing” isn’t a lot cheaper than in the US. But by manufacturing in the US, Apple will have a lot more control over its intellectual property. Transportation costs will be smaller. Lead times might shrink. And other risks can be mitigated more easily.

But this isn’t the Industrial Revolution. Read…  How Many Jobs Do Robots Destroy? Answers Emerge

4 thoughts on “Manufacturing Might Come Back to the US, but Robots will Get the Jobs: Apple CEO”