I hope you all know that Macron worked as an investment banker for Rothschild.

Readers can following the latest news on the ground courtesy of France 24:

Update 4:42pm: As expected, with the city vote starting to come in, Macron has just taken the lead according to Interior Ministry data:

Germany’s chancellor Angela Merkel is delighted, saying that it is “good that Macron was successful.”

Update 4:10pm: Le Pen’s lead in the official votes is slipping, and according to Interior Ministry data, now been updated with 50.02% of the total eligible voters, Le Pen’s lead continues to narrow now at 1.71% points from 2.19% in the last update. This is expected given that urban areas are the last to report results, and are less likely to vote for the far-right candidate.

Update 3:10pm ET: Marine Le Pen is speaking, and acknowledges she will be in the second round of the election, and that she is honored her voters have sent her into the second round.

She says he result in the first round is “historic” and that her “result is an act of French pride.” She also adds that “she’s ready to take on the defense of the French republic” and that the French need to seize this historic opportunity to fight “savage globalization.” 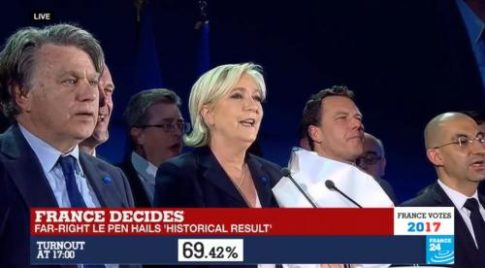 Update 2:43pm ET: Francois Fillon concedes, saying “this defeat is mine, and mine alone”, although as Bloomberg notes, “Fillon is still bitter, though, about the investigative journalism and resulting criminal investigation, that torpedoed his campaign.” Oh, and like all of the French political establishment, he endorses Emmanuel Macron.

Update: 2:34pm ET: Interior ministry data shows Le Pen pulling away for the time being and now has over 25% of the early vote, based on 7.8 million votes.

A note from Bloomberg in its live elections blog on the discrepancy:

“An important note that 7.8 million votes have been counted as of 8:21 p.m. Paris time. The total size of the French electorate is about 47 million (the abstention rate is about 20%). The Interior Ministry numbers are based on the actual count, while the numbers from pollsters are based on samples of counts from polling stations across the country — the pollster numbers may be more accurate. While both the Interior Ministry numbers and the pollsters’ figures show Macron and Le Pen making it to the second round, pollsters show Macron ahead of Le Pen.”

The first results are in and according to IPSOS exit polls, Macron leads with 23.7% of the vote, Le Pen is second with 21.7%, with Fillon and Mellenchon tied for third at 19.5%. However, according to official results, from the French interior ministry, Le Pen is leading with 24.3% of the vote, Macron is at 21.4%, while Fillon has 20.3%.

Meanwhile, according to French official data:

Elsewhere, Benoit Hamon, the candidate for the incumbent Parti Socialiste of Francois Hollande, has just conceded defeat after a dismal showing of around 6%. He spoke to supporters and the press in a packed out hall and made an instantaneous endorsement for Emmanuel Macron.

While we urge taking early polls with a big grain of salt, according to a Harris poll, Macron is in the lead with 24.5% of the vote, follow by Melenchon and Le Pen in second place with 20% of the vote.

A separate poll from La Unne shows Macron leading with 26% with Le Pen in second at 23%.

Additionally, Harris estimates that the turnout in the election will be roughly 80%, while Ifop predicts a 77% turnout.

That said, as Reuters cautions, in 2012, some media outlets leaked estimations before the 8 p.m. embargo time. This time, analysts warn any figures on social media before 8 p.m. should be treated with extreme caution as likely based on incomplete surveys that don’t meet the gold standard.

Some have warned that if the race is extremely close, the polling companies won’t be able to call it and we’ll have to wait until the complete count of votes by the Interior Ministry expected Monday morning.

Reuters also adds that a downbeat tone is emerging from Socialist Benoit Hamoin’s election-night base, “where the main concern appears to be whether alternative left-wing candidate Jean-Luc Melenchon will go through.” “We hope the score will be worthy of this very fine campaign. We would hope to qualify but it doesn’t seem to be the case,” adviser Julia Cage tells Reuters correspondent Dominique Vidalon.

Meanwhile, Reuters’ journalists say “Marine Le Pen supporters are in confident mood in the National Front’s northern stronghold of Henin-Beaumont, where hundreds of supporters and journalists are trying to enter a sports hall chosen for tonight’s rally. Civil servant Delphine, 49, dismisses recent polls showing a tight race. “I totally reject the polls, I am confident for this evening and I can’t wait to see the difference between the (results and the) figures which have been hammering us for weeks. For us it’s clear – Marine is in the second round.”