– The Father of the Euro: The Currency “Will Collapse”:

The Brexit was only the beginning.

Four months ago, Great Britain voted to leave the European Union (EU). The decision caught investors by surprise and triggered one of history’s most violent selloffs.

It erased more than $3 trillion from the global stock market in just two days. And the pound sterling, Britain’s currency, plunged 8% in one day. The pound is now trading at its lowest against the U.S. dollar in three decades.

Investors sought cover in safe-haven assets. The price of gold surged 5% the day after the Brexit. Meanwhile, yields on many government bonds hit record lows. (A bond’s yield falls when its price rises.)

On June 27, we told you the Brexit was just a “taste of what’s to come.” As we explained, the EU was just beginning to unravel. In short, we warned the Brexit was merely the first domino to fall in the inevitable collapse of the EU.

Then, the panic went away.

Many analysts saw this as proof that investors had overreacted to the Brexit. But we stuck by our call.

You see, unlike other analysts, we think the EU was doomed to fail from the start. Casey Research founder Doug Casey summed it up best:

The EU was built upon a foundation of sand, doomed to failure from the very start. The idea was ill-fated because the Swedes and the Sicilians are as different from each other as the Poles and the Irish. There are linguistic, religious, and cultural differences, and big differences in the standard of living. Artificial political constructs never last. The EU is great for the “elites” in Brussels; not so much for the average citizen.

Now, if the EU unravels, the euro will also crumble. We’re not the only people who think this, either.

• Otmar Issing thinks the euro is a “house of cards”…

Issing might be one of the most important people you’ve never heard about. In 1998, he joined the European Central Bank (ECB) as an economist specifically to create the euro. Many people consider him the father of the currency.

In a shocking recent interview, Issing said the euro was doomed. GoldCore, one of the world’s leading gold brokers, covered the story in its blog on Tuesday:

In the explosive interview with the journal Central Banking, Professor Issing said “one day, the house of cards will collapse” as the European Central Bank (ECB) is becoming dangerously over-extended and the whole euro project is unworkable in its current form.

The founding architect of the monetary union has warned that Brussels’ dream of a European superstate will finally be buried amongst the rubble of the crumbling single currency he designed.

Issing didn’t feel this way four years ago. In 2012, he said the euro could be safe if weak countries like Greece left the EU. Today, he’s less hopeful about the currency’s future.

• Issing’s warning is a HUGE deal…

It would be like Thomas Jefferson rising from the dead to say that we should shred up the Constitution.

And yet, almost no one is talking about this. Business Insider is one of the only mainstream media outlets that’s picked up the story so far.

Now, we get that the media is busy covering the U.S. presidential election. Still, this story deserves to be front-page news.

As is frequently the case when there is substantive damaging criticism about the EU and ECB from respected and authoritative sources, the interview was treated in quite an Orwellian manner. It [was] completely ignored and not reported by most state run media in Ireland, the UK and EU. Most state run media is overwhelmingly pro-EU and continues to ignore the serious problems and growing risks posed by the single currency and the undemocratic EU to the citizens of Europe. Nor was it reported in most corporate media in the EU which also tends to ignore all reasonable criticisms of the EU, ECB and especially the euro.

According to O’Byrne, the average European needs to know about this:

The explosive interview has been covered extensively in the more “right wing” euro “skeptic” media in the UK in papers such as The Telegraph and [t]he [Daily] Mail which means that most people in the EU will not even be aware of Otmar Issing’s very real and reasonable concerns and the growing risks posed to the currency they use in their lives every day and their very way of life.

But the media won’t be able to hide this story for much longer.

• The euro is plummeting right now…

It’s lost 3% of its value against the U.S. dollar since the start of October. This morning it hit a seven-month low.

Recent comments by the ECB triggered the latest round of selling. Reuters reported this morning:

The euro hit its lowest against the dollar since March after the ECB left its ultra-loose policy unchanged on Thursday but kept the door open to more stimulus in December.

The term “asset-buying programme” refers to the ECB’s quantitative easing (QE) program. QE is when a central bank creates money from nothing and pumps it into the financial system. It’s basically money printing.

The ECB, Federal Reserve, and Bank of Japan (BOJ) have all tried to stimulate their economies with QE. It’s failed every time.

And yet, idiotic central bankers keep printing money in hopes that it will juice their economies.

• The more money the ECB prints, the more it will destroy the value of the euro…

Unfortunately, the ECB can’t just turn off QE. You see, like the U.S., Europe’s economy is hooked on easy money. Reuters reported:

“Weaning markets off easy monetary policy will be a delicate exercise for the ECB, and we think the bank is unlikely to remove its stimulus until inflation is solidly on track to 2 percent,” Andrew Bosomworth, managing director and portfolio manager at PIMCO, said in a note.

Issing also thinks the ECB has painted itself into a corner:

An exit from the QE policy is more and more difficult, as the consequences potentially could be disastrous.

• According to Issing, the EU is marching to its own death…

He warned on Monday:

Realistically, it will be a case of muddling through, struggling from one crisis to the next. It is difficult to forecast how long this will continue for, but it cannot go on endlessly. Governments will pile up more debt—and then one day, the house of cards will collapse.

Issing didn’t say when the euro would implode. But we think it could happen sooner than most people think. Doug recently explained why:

[It]’s the beginning of the end. The inevitable has now become the imminent. Britain has always been perhaps the most different culture of all of those in the European Union. They entered reluctantly and late, and never seriously considered losing the pound for the euro.

You’re going to see other countries leaving the EU. The next one might be Italy. All of the Italian banks are truly and totally bankrupt at this point. Who’s going to kiss that and make it better? Is the rest of the European Union going to contribute hundreds of billions of dollars to make the average Italian depositor well again? I don’t think so. There’s an excellent chance that Italy is going to get rid of the euro and leave the EU.

• If Italy leaves the EU, the fallout could be far worse than what we saw with the Brexit…

Unlike Britain, Italy actually uses the euro. Its exit could also pave the way for other European countries to exit the EU.

This is something you need to prepare for, no matter where you live.

The first thing you should do is own physical gold. If the euro keeps plunging, Europeans will seek safe havens. Many of these people will park money in gold.

This could cause gold prices to skyrocket. Just look at what gold did in Britain after the Brexit. 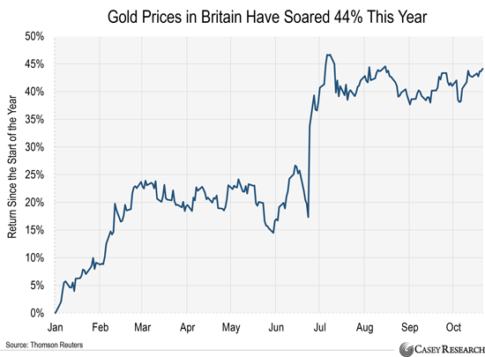 In August, Nick Giambruno, editor of Crisis Investing, shorted the euro. Shorting is betting that an asset will fall. If it does, you make money.

Many investors think shorting is something only the “pros” do. But Nick found a way to short the euro that doesn’t involve complex strategies like trading options. You don’t even need to open a special brokerage account. In fact, it’s just as easy to short the euro using Nick’s method as it is to buy a share of McDonald’s (MCD).

• In less than two months, Nick’s readers are already up 7% on this trade…

But it’s not too late to bet against the euro.

To discover why, watch this shocking presentation. It talks about a HUGE event that will take place on December 4.

The Financial Times says it could “trigger the total collapse of the eurozone within a very short period. It would probably lead to the most violent economic shock in history, dwarfing the Lehman Brothers bankruptcy in 2008 and the 1929 Wall Street crash.”

If the FT is even partially right, we’re looking at a possible stock market crash of historic proportions. That’s why we recommend you prepare right away. You can learn how to get started by watching this FREE video.

Chart of the Day

The “smart money” is stockpiling cash at the highest level in almost 15 years.

A Bank of America Merrill Lynch survey of fund managers showed investor cash holdings rose to 5.8% in the month of October, up from 5.5% in September, levels not seen since the Brexit vote in the U.K. and the 9/11 terrorist attacks.

This survey polled 171 money managers who together oversee more than $440 billion. According to Investopedia, these investors are hoarding for four main reasons. They’re worried about the EU falling apart (20%)…a collapse of the bond market (18%)…Trump winning the election (17%)…and rising inflation in the U.S (12%).

You can see in today’s chart that a disintegration of the EU is the biggest worry among these managers. Keep in mind that the euro will be in serious trouble if the EU starts to unravel. 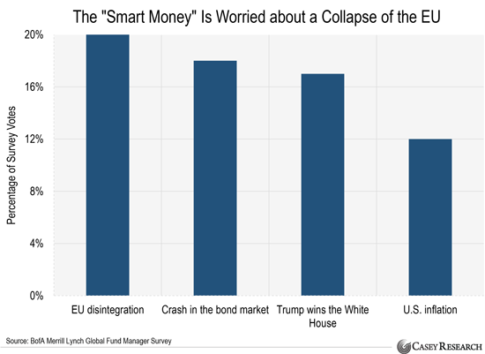 “Once again, if the chief engineer says the euro is doomed and the whole, culturally and linguistically disparate forced union disintegrates, as seems the ultimate result, The UK seems headed for a respectable assisted exit.”