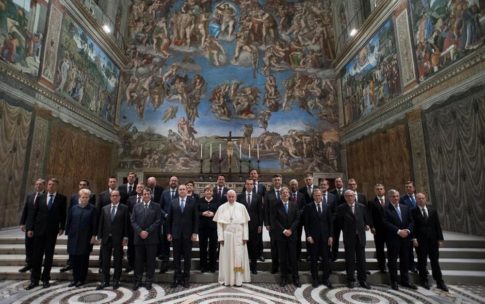 – EU leaders converge on Rome to rekindle sense of unity:

ROME (AP) — Posing with Pope Francis before Michelangelo’s masterpiece “The Last Judgment” at the Vatican, European Union leaders started their weekend pilgrimage in Rome hoping that a visit to the cradle of their unity project could somehow rekindle the vigor of the bloc’s youth.

At the Sistine Chapel, EU leaders posed with Francis in front of the Michelangelo fresco, which depicts the end of the world. Six decades ago, few would have imagined the end of the EU could even be discussed.

“This s devious confirmation of the bullshit plan to give the plebs the impression they might have power and thus no Brexit.”

In my opinion, they are sending another message.