– What in the world is Donald Trump?:

“Great men, even during their lifetime, are usually known to the public

only through a fictitious personality.”

For many people, President Donald Trump presents an enigma.

Our brains seek to put labels on other humans.  The labels we have readily available to us can come from nature (black, male, old, fertile, weak, etc.) and from nurture (liberal, Republican, foreign, racist, wealthy, ignorant, lazy, dangerous, etc.).  This labeling, categorizing, or naming, is part of the normal mental process of stereotyping, and is a valuable survival skill and evolutionary advantage, despite what you may have been taught.

For some cognitive psychologists, stereotyping describes a value-neutral psychological mechanism that creates categories and enables people to manage the swirl of data presented to them from their environment.  This categorizing function was recognized in 1922 by Walter Lippmann, who first coined the term “stereotyping.” For him, this was a necessary, useful, and efficient process, since “the attempt to see all things freshly and in detail, rather than as types and generalities, is exhausting, and among busy affairs practically out of the question.”

When we do not have enough information to stereotype others, it can make us quite uncomfortable.  Is this person a threat to me?  A potential mate or friend?  Trustworthy?   So, our senses gather information to help our brains analyze the data to fill in the blank label.  We also work very hard at trying to fill in these blanks for other people, and even harder at changing them, especially the media, but that is a future topic.

Yesterday, I read an article on ZeroHedge describing how one of the world’s most successful investors allegedly used a financial ratio to analyze the data and then label Trump.

On one hand, there was RenTec’s chain-smoking billionaire founder (in 2015 alone he made $1.7 billion) Jim Simons, who had donated some $10 million to Hillary Clinton’s campaign, second only to Saban Capital. In a June 2016 interview with CNBC, Jim Simons said that “if you compare the presidential candidates using the Sharpe ratio, presumptive GOP nominee Donald Trump is ‘not a good investment.'”

This caused me to remember that I, too, had labeled Trump just a few days earlier.

“I do know one thing.  Donald Trump is not a libertarian.”

I asked myself, is that really true?  How did I come to that conclusion?  What is a libertarian?  This article is merely one attempt to answer those questions.

I like to tell people that libertarian is the political label for someone that simply wants two things: 1) maximum freedom, and 2) minimum government, and who prioritizes those two over the other political values he or she may hold.  Years ago, I posted a much longer answer here on ZeroHedge in the form of the Libertarian Party Platform.  Unfortunately, the comments appear to have been lost in one of the many DNS/hacking battles fought by Sacrilege in defense of this good and valuable web site.  At the time of that post, I had learned of the The World’s Smallest Political Quiz, and had posted the link in the comments, along with my score, and an invitation for readers to take the test.

Today, I invite you, dear reader, to join me in taking the test on behalf of President Trump, in the hope of determining if he is, or is not, a libertarian.  I provide links, below, to a small number of pertinent items that I feel support my answers.

Government should not censor speech, press, media, or internet.

Based on Trump’s comments about Snowden and Manning, I am going with DISAGREE.

Based on Trump’s five draft deferments, one medical, I am chosing MAYBE.

There should be no laws regarding sex for consenting adults.

Considering Trump’s actual statements and actions, I am picking AGREE for our POTUS.

Repeal laws prohibiting adult possession and use of drugs.

This seems to be a clear DISAGREE.

There should be no National ID card.

I am selecting DISAGREE for Trump, based on his campaign statements.

It appears Trump would AGREE.

Cut taxes and government spending by 50% or more.

Any actual tax cuts will likley not come close to 50%, and Trump says he is going to spend bigly, so I clicked DISAGREE for the President.

Here is the result of my test.  Donald Trump is a Big Government Statist.

Statists want government to have a great deal of power over the economy and individual behavior. They frequently doubt whether economic liberty and individual freedom are practical options in today’s world. Statists tend to distrust the free market, support high taxes and centralized planning of the economy, oppose diverse lifestyles, and question the importance of civil liberties. 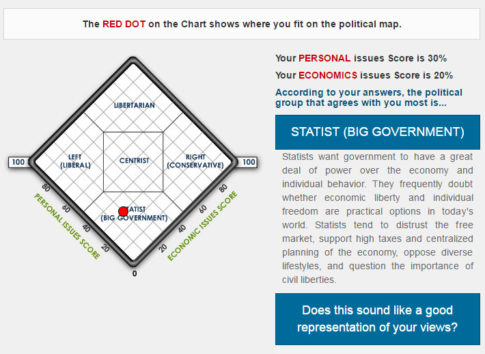 Apparently, I had already done a similar analysis in my mind, because according to this test, Donald Trump is the polar opposite of a libertarian.  This label fits with the personal interactions I have had with Donald Trump, years ago, at his then private home in Florida and on vacation in Aspen.

It should be interesting to learn, below, how your answers on behalf of Trump are different from mine, and why.