– The West Submits To Blasphemy Laws:

Via Judith Bergmann of The Gatestone Institute,

The West is submitting to blasphemy laws. Denmark, for example, has apparently decided that now is the time to invoke a dusty, old blasphemy provision. Denmark still has a provision in the penal code against blasphemy, but until now, it has only been used three times. The last time was nearly half a century ago, in 1971. Denmark’s Attorney General has nevertheless just charged a man for burning a Quran.

In the West, blasphemy as a criminal offence has for centuries generally been considered a relic of the past. In a largely godless society, few people take offense to blasphemous comments or acts. Christians do not descend upon alleged blasphemers with guns and knives, and publishers do not worry about “offending” Christians.

In 1997, Danish public service radio financed an artist burning a Bible and broadcast it on national television. No one was charged, even though there were complaints and the state prosecutor investigated the case.

Yet, a Danish man will be prosecuted. He burned his own Quran in his own garden and then posted the video in a public Facebook group, “Yes to freedom, No to Islam,” with the accompanying text, “Consider your neighbor, it stinks when it burns”. Attorney General Jan Reckendorff stated:

“It is the prosecution’s view that the circumstances of the burning of holy books such as the Bible and the Qur’an implies that in some cases it may be a violation of the blasphemy provision, which deals with public mockery or scorn against a religion. It is our opinion that the circumstances of this case require that it should be prosecuted in order for the courts to have the opportunity to take a position on the matter.”

The Attorney General may have been mentioning the Bible only out of politeness. After all, no one has been prosecuted for burning the Bible in Denmark, as not even burning it on national television was considered sufficiently offensive. The Quran is clearly a very different matter.

The decision has caused renewed debate about abolishing the blasphemy provision in Denmark — an issue that regularly pops up.

In Norway, the provision against blasphemy was abolished in 2005. A poll conducted in January showed that 41% of Norwegian Muslims believe that blasphemy should be punished, and 7% believe that the penalty for blasphemy anywhere should be capital punishment.

In Britain, at least one man has been prosecuted and sentenced for burning the Quran (in 2011) and several arrested in 2010 and 2014 .

The enforcement of blasphemy provisions, so out of place in a largely post-Christian Europe, brings back the Middle Ages, when blasphemy was ferociously prosecuted by the Church. Is that really an era for modern European society to be aspiring to after centuries of fighting for freedom of speech?

In Canada, meanwhile, anti-Islamophobia motions, aiming gradually to prohibit all criticism of Islam — and part of Muslim blasphemy laws — are being passed. The Ontario Provincial Parliament unanimously passed an anti-Islamophobia motion in February. The motion called on the legislature to “stand against all forms of hatred, hostility, prejudice, racism and intolerance; rebuke the… growing tide of anti-Muslim rhetoric and sentiments” and “condemn all forms of Islamophobia.” Needless to say, no such motions were introduced to protect Judaism or Christianity.

In October 2016, Canada’s national Parliament unanimously passed an anti-Islamophobia motion, which was the result of a petition initiated by Muslim Brotherhood-affiliated Samer Majzoub, president of the Canadian Muslim Forum. At the time, no one knew what they were condemning: Criticism of Islam? Criticism of Muslims? Discussing whether ISIS is a true manifestation of Islam? No one knew, as no one had bothered to define it. 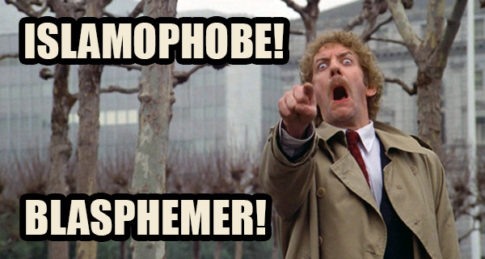 The lack of definition, however, has not stopped Iqra Khalid, a Member of Parliament from the governing Liberal Party, from introducing a new motion on the back of the previous one, Motion M-103, in the Canadian parliament. The motion demands that “Islamophobia” not only be condemned, but that the government develop a comprehensive approach to reducing or eliminating Islamophobia. The motion still does not offer any definition, or any statistics to support its claim that “Islamophobia” is a problem in Canada. However, it should hardly shock anyone that the first motion condemning Islamophobia has so swiftly been followed up by a new motion demanding concrete government measures. After the first motion was unanimously passed, the man who initiated the original petition, Samer Majzoub, had this to say in an interview with the Canadian Muslim Forum:

“Now that Islamophobia has been condemned, this is not the end, but rather the beginning… We need to continue working politically and socially and with the press. They used to doubt the existence of Islamophobia, but now we do not have to worry about that; all blocs and political figures, represented by Canada’s supreme legislative authority, have spoken of that existence. In the offing, we need to get policy makers to do something, especially when it comes to the Liberals, who have shown distinct openness regarding Muslims and all ethnicities… All of us must work hard to maintain our peaceful, social and humanitarian struggle so that condemnation is followed by comprehensive policies.”

Does the West really want to go charging quixotically off to the Inquisitions of the Middle Ages again?