The French government’s flagship program to deradicalize jihadists is a “total failure” and must be “completely reconceptualized,”according to the initial conclusions of a parliamentary fact-finding commission on deradicalization.

The preliminary report reveals that the government has nothing to show for the tens of millions of taxpayer euros it has spent over the past several years to combat Islamic radicalization in France, where 238 people have been killed in jihadist attacks since January 2015. The report implies that deradicalization, either in specialized centers or in prisons, does not work because most Islamic radicals do not want to be deradicalized.

The report, “Deindoctrination, Derecruitment and Reintegration of Jihadists in France and Europe” (Désendoctrinement, désembrigadement et réinsertion des djihadistes en France et en Europe) — the title avoids using the word “deradicalization” because it is considered by some to be politically incorrect — was presented to the Senate Committee on Constitutional and Legal Affairs on February 22.

The report is the preliminary version of a comprehensive study currently being conducted by a cross-party task force charged with evaluating the effectiveness of the government’s deradicalization efforts. The final report is due in July.

Much of the criticism focuses on a €40 million ($42 million) plan to build 13 deradicalization centers — known as Centers for Prevention, Integration and Citizenship (Centre de prévention, d’insertion et de citoyenneté, CPIC) — one in each of France’s metropolitan regions, aimed at deradicalizing would-be jihadists.

The original plan, which was unveiled with great fanfare in May 2016, called for each center to host a maximum of 25 individuals, aged 18 to 30, for periods of ten months. The government said that 3,600 radicalized individuals would enter these deradicalization centers during the next two years.

The government’s first — and, until now, only — deradicalization center, housed in the Château de Pontourny, an isolated 18th-century manor in central France, opened in September 2016.

When Senators Esther Benbassa and Catherine Troendlé, both of whom are leading the task force, visited Pontourny on February 3, they found only one resident at the facility. That individual has since been imprisoned for committing “acts of domestic violence.”

After just five months of operation, Pontourny is now empty, even though it employs 27 people, including five psychologists, a psychiatrist and nine educators, at an annual cost of €2.5 million ($2.6 million). 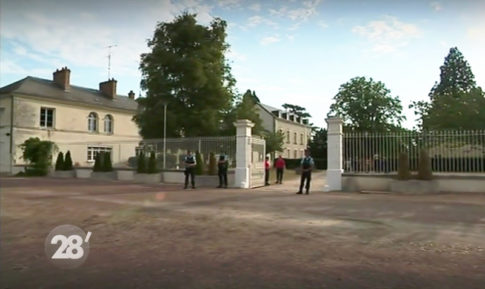 Although France is home to an estimated 8,250 hardcore Islamic radicals, only 59 people have inquired about going to Pontourny since its opening. Of those, only 17 submitted applications and just nine arrived. Not a single resident has completed the full ten-month curriculum.

One of the residents was a 24-year-old jihadist named Mustafa S., who was arrested during a counter-terrorism operation near Strasbourg on January 20, 2017. Police said he has links to one of the authors of the November 2015 jihadist attack on the Bataclan Theater in Paris. Mustafa S. was arrested while on leave from Pontourny: He was allegedly on his way to join the Islamic State in Syria.

Another one of the residents of Pontourny was a 24-year-old pregnant woman named Sabrina C., who lived in the facility from September 19 to December 15. She revealed to a local newspaper that she has never been radicalized but took advantage of Pontourny to escape her “family cocoon” and get some “fresh air”:

“At no time did I feel interested in any religion whatsoever. My family is Catholic, non-practicing, we go to church from time to time, but no more. My boyfriend wanted me to wear the headscarf, but I always refused.”

Sabrina’s mother said the deradicalization facility “was an opportunity for our daughter to attend vocational training, to learn cooking, to be near the animals.” Sabrina added that her stay there was a nightmare: “I wept every night, I did not feel in my place. In Pontourny, they treated me like a criminal.” She speculated that the only reason she was allowed into the facility was because the government needed “to make the numbers.”

The government has also failed in its efforts to stamp out Islamic radicalization in French prisons. In October 2016, the government reversed a policy to house radicalized prisoners in separate units after an increase in attacks on prison guards.

The original idea was to isolate Islamists to keep them from radicalizing other inmates, but Justice Minister Jean-Jacques Urvoas admitted that by housing them in separate prison wings, the Islamists actually had become more violent because they were emboldened by what he called “the group effect.”

Benbassa said that the government’s deradicalization program was ill-conceived and rushed for political reasons amid a growing jihadist threat. “The government was in panic as a result of the jihadist attacks,” she said. “It was the panic that guided its actions. Political time was short, it was necessary to reassure the general public.”

French-Iranian Sociologist Farhad Khosrokhavar, an expert in radicalization, told France 24 that the government’s only option for dealing with hardcore jihadists is to lock them up:

“Some people can be deradicalized, but not everyone. It’s impossible with the hardcore jihadists, those who are totally convinced. These types of profiles are very dangerous and represent about 10% to 15% of those who have been radicalized. Prison might be one of the only ways of dealing with these die-hard believers.”

In an interview with L’Obs, Benbassa said the government has also failed to address prevention:

“Young candidates for jihadism must be socialized. We must teach them a profession, professionalize them and offer them an individualized follow-up. This involves the help of the family, imams, local police officers, educators, psychologists and business leaders, who can also intervene….

“I also think that our political leaders should adopt a little sobriety and humility when approaching this complex phenomenon. The task is extremely difficult. ‘Deradicalizing’ someone does not happen in six months. These people, who have not been given an ideal and who have clung to Islamic State’s ideology, are not going to get rid of it just like that. There is no ‘Open Sesame.'”

Senator Philippe Bas, the head of the Senate committee that commissioned the report, described the government’s deradicalization program this way: “It is a total fiasco. Everything must be rethought, everything must be redesigned from scratch.”