February 2007. The month in which some 135 people were killed in a market bombing in Baghdad, the Indianapolis Colts beat the Chicago Bears in the Super Bowl, and President Putin delivered a speech at the Munich Conference on Security Policy.

It was a speech that made front page news across the world.

‘Putin rails against US foreign policy’ was the headline of the FT. ‘Putin says US is undermining global security’ was the splash of the New York Times. ‘Putin’s speech: Back to Cold War?’ asked the BBC. The World Socialist Website described the address, delivered in front of politicians, military officials, entrepreneurs and experts from more than 40 countries as “one of the most vociferous criticisms of Washington publicly voiced by the head of any major power.”

Ten years ago, there were probably quite a few people who – even after the debacle of Iraq – thought the Russian President had gone ‘over the top’ in his criticism of the way the US operated on the international stage.

Predictably, one of those who lambasted Putin’s speech was the neocon warmonger and then US Presidential hopeful John McCain, who sat in the front row with his eyes staring upwards at the ceiling while Putin addressed the conference. McCain said Russia’s foreign policy was opposed to the “principles of Western democracies.”

According to the Arizona Senator, it was Russia, not the US which needed to change its behavior. But almost everything Putin said at Munich was correct and has been borne out not only by what happened before February 2007, but what has occurred subsequently.

Putin told the audience that after the Berlin Wall had come down, because of “choices” made in Russia “in favor of democracy, freedom, and openness,” NATO Secretary General Manfred Woerner had said “the fact that we are ready not to place a NATO army outside of German territory gives the Soviet Union a firm security guarantee.”

However, such “firm security guarantees” from the West weren’t worth the paper they weren’t written on. NATO responded to the disbandment of the Warsaw Pact by becoming more – not less – aggressive. Not only was the Western military alliance expanded eastwards, ever closer toward Russia, but countries which were friendly toward Moscow, like the Federal Republic of Yugoslavia, were deliberately destabilized and targeted for regime change.

We only have to imagine, as I wrote here, if the situation had been reversed and NATO – not the Warsaw Pact – had been dissolved in the early 90s. Imagine the consequences if Russia had subsequently sought to expand the Warsaw Pact to Mexico and Canada and bombed countries which did not want to become members like NATO bombed Yugoslavia. Would we now be talking of “American aggression”? I think not.

Putin warned his audience that “we are seeing a greater and greater disdain for the basic principles of international law.”

That was an explicit reference to the illegal US-led invasion of Iraq, which was sold to the public on the basis of an outrageous lie, namely that Iraq possessed WMDs that could be assembled within 45 minutes. 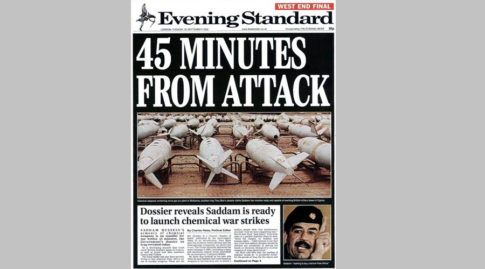 But it could also apply to the NATO bombing of Yugoslavia eight years earlier, which was also unlawful and sold to the public with lurid – and false – claims Yugoslav forces were committing “genocide” in Kosovo.

Since 2007, the US and its allies have continued to show “disdain” for the “basic principles of international law,” the Russian leader said. Their bombing campaign in Syria, for example, is not carried out with the consent of the country’s internationally recognized government. In 2011, the UNSC Resolution 1973 on Libya, which demanded the “immediate establishment of a ceasefire,” was used to bring about regime change with ceasefire proposals from the Libyan government and others outright rejected.

“One state and, of course, first and foremost the United States, has overstepped its national borders in every way. This is visible in the economic, political, cultural and educational policies it imposes on other nations. Well, who likes this? Who is happy about this,” Putin asked ten years ago. The very same question could be invited today.

However, the significant change since 2007 is that resistance to US empire-building is far stronger internationally and within the US itself.

The US got its way in Libya in 2011 with NATO planes helping to turn the country with the highest living standards in Africa into a jihadist’s theme park. Its hegemonic aspirations were checked in both Ukraine, however, thanks to resistance to ‘regime change’ in the east of the country and Crimea, and in Syria where US-backed “moderate rebels” have failed to topple the government.

Anger among the Western elite with the more assertive role that Moscow has played in international affairs since Putin’s speech ten years ago, and in particular Russia’s thwarting of neocon plans for Syria, has led to the imposition of sanctions by the US and the EU and the almost constant demonization of the country and its leadership. Attempts to intimidate Russia into “toeing the line” can also be seen in the recent NATO military build-ups on Russia’s borders, the largest since the Nazi invasion of 1941.

We must mention too, in this context, the media wars, and the none-too subtle attempts to get broadcasters like RT and Sputnik off-air for daring to present a non-NATO approved view of events.

However, as grim as all this sounds, the unipolar world President Putin described in 2007 is now over. Liberal interventionist columnists and defense industry-funded ‘experts’ might still rage against Russia in their weekly ‘Something Must Be Done!’ opeds, (written in comfortable, centrally heated offices thousands of miles away from the war zones they helped to create), but events on the ground have turned against them. The expressed desire of US President Donald Trump to build better relations with Moscow can be taken as a sign that the ‘Empire’ finally acknowledges its limitations.

At his inauguration address, Trump declared: “We will seek friendship and goodwill with the nations of the world – but we do so with the understanding that it is the right of all nations to put their own interests first.” He also said that the US would not “seek to impose its way of life” on anyone.

The challenge now is to hold Trump to these fine words. For when one surveys the world and the enormous human, financial and environmental damage caused by US-led ‘interventionism’ since the end of Cold War 1.0, then an end to the ‘Era of Interventionism’ can only be welcomed.

Perhaps in the decades to come, we’ll look back at Putin’s Munich speech as the start of building a much better and more peaceful world. No wonder John McCain was so upset.

“I still think the establishment can’t handle Putin yet. Or at least I hope not.”