There is now a high probability that Trump is the one that will be assassinated just before WW3.

It seems Ireland’s media has decided to one-up Germany’s. Following Spiegel’s Lady-Liberty-beheading images, Ireland’s Village Magazine cover shows crosshairs on President Trump’s head with the question “why not?” However, there is a silver lining to this utter stupidity, the magazine decides “killing people is wrong… and shooting Trump is unnecessary and disproportionate.” 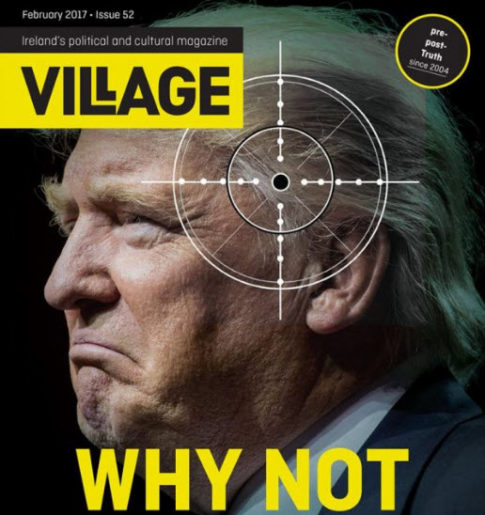 This outrageous image was tweeted with the caption, “Why taking #Trump out would be unethical.”

As Mediaite reports, after making the case for why Trump is a threat to the world, the piece dives into the morality of whether assassinating the president is justified:

St Thomas Aquinas gave the most substantial Christian argument for tyrannicide. He based his position on his arguments for just war and capital punishment and concluded: “He who kills a tyrant (i.e. an usurper) to free his country is praised and rewarded”.

However, Trump has a mandate: he was elected very recently. Aquinas would be reticent about the degree of usurpation in this case.

On the other hand, Trump’s impulses are not democratic. If he pushes towards curtailing freedoms and minority rights it may legitimate for Christians to think about removing him. A tyrant by oppression is one who has come to power legitimately, but rules unjustly, oppressively, and arbitrarily. Here Aquinas believed the community had a duty to confront the tyrant, and if necessary, depose him, according to the course of law available. If he does not go, he becomes a tyrant by usurpation and thereby may be eliminated by an act of justifiable tyrannicide in accord with principles of necessity and proportionality and provided the common good is served.

Acting in accordance with these principles, to save Germany from devastating defeat in the Second World War, and form a new government, Lieutenant Colonel Klaus von Stauffenberg, described as “a serious Catholic,” formed a plot to assassinate Hitler, which famously failed in 1944, resulting in his execution.

However, the piece ultimately concludes that assassinating the President of the United States is not a good idea. Part of their argument is that he may end up resigning or get impeached anyway, arguing,

“He will fall on a metaphorical sword, he does not need one wielded by a third party. Shooting Trump is unnecessary and disproportionate.”

And then it concludes:

Furthermore in the process of self-destruction he will generate an awareness of the dangers of allowing power to an intolerant narcissist so that institutions will be reformed, progressive policies enshrined and popular opinion inured against ever repeating the Trump mistake.

On these bases, the Natural Law would wait to see democracy play its proper role, utilitarianism would say the backlash against an assassination would risk all it might achieve and lose the benefits that a democratic backlash would itself achieve. Rights-based theories would perhaps come closest to condoning violence against Trump but the right to life of Trump himself would weigh heavily.

More trivially, any would-be assassin, more even than von Stauffenberg, risks being uncovered and discredited – in person and ideologically…

The calculus is clearly against violence, even in the case of Trump. Stick to democracy, rigorously but applied, as necessary, stealthily and aggressively.