The only other thing I could think of was that TurboTax did not work correctly and calculated to large of a refund but the letter from the IRS stated it was a “processing error at the Internal Revenue Service”. The refund we received was the same as what TurboTax calculated. I researched the IRS manual about erroneous refunds and could not find anything referring to a “R17” code as stated in the letter.

Called them. Our return was fine. The amount of refund was fine. Not an identity theft problem. Error on their side. According to the person I spoke with they are doing this to a large block of filers. They seemed hesitant to give more info.

He then adds that “in our phone conversation they told me that the return was fine and the refund amount was correct, it was not an over refund issue but some kind of IRS internal error and they would reissue the same refund after receiving the money back. It makes absolutely no sense to me but this is what I was told.”

So, as our reader summarizes, “no outstanding taxes. Never been audited. Always file on time. Not a small business, just a normal employee W2, not a structuring issue. Only typical deductions and student loan interest. Scrambling to cancel auto payments and trying to figure out how we will pay mortgage and any payment that will not accept credit card.

His question, “how can this be legal with no notice?” is not simply rhetorical. To be sure, the IRS has virtually unlimited rights over individual fund flows and stock, among which to:

File a tax lien against you;

Close down your business;

Seize and sell your home;

Put you in a monthly installment payment arrangement that is too high;

Go after third party transferees of your assets.

… but all of the above are only permitted in the course of “due process”, when an individual taxpayer has been found in violation of US tax laws.

In this case the IRS counterparty was in no way at fault, and was merely the lucky recipient of a clerical IRS error, in the IRS’ own words, without any justification or validation. That the IRS would then have full liberty to indirectly enter the account with no warning, and take out whatever funds it deemed appropriate – again, with no explanation of just what the “error” was – is sufficiently disturbing, and is why the person who this happened to would like to know if it has happened to other ZH readers and if so, does he have any legal rights in this particular case.

The redacted IRS notice sent to the readers’ bank, in this case the ASCU, is below: 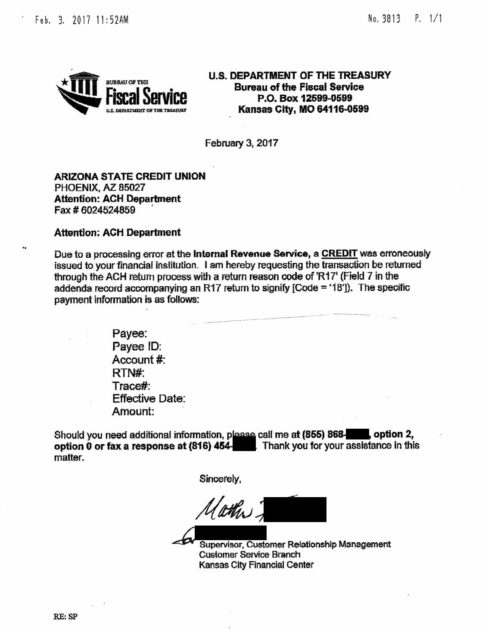