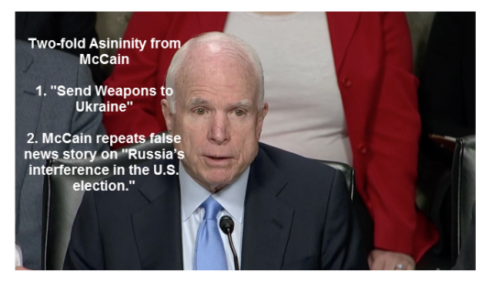 McCain also reiterated his call for Trump to maintain sanctions on Russia and impose new ones for Russia’s interference in the U.S. election.

“Ukrainians are not asking Americans to do their fighting,” McCain said. “Nearly 10,000 Ukrainians have died to protect their homeland and many more are serving and have sacrificed for the cause of a free and united Ukraine. But America does have a proud history of helping free people to defend themselves.”

My article concluded “It could have been worse. The warmongers led by Senator John McCain and Hillary Clinton were itching for a major fight with Russia. Fools like Pelosi add fat to the fire.”

If McCain wants to understand the source of the mess in Ukraine, Libya, Syria, and Iraq, all he has to do is look in a mirror.

McCain and his warmongering collection of neocons are the problem. The sooner McCain leaves the Senate, the better off the US will be and the safer the world will be.

@ggreenwald If meddling is an act of war, McCain is personally involved, with tremendous blood on his hands. https://t.co/TQwmQ6gHfTpic.twitter.com/bYlqb9XkOU

1 thought on “Asininity From John McCain “Send Weapons To Ukraine””