Submitted by Mike Shedlock via MishTalk.com,

Idiotic government decisions are a dime a dozen. Here’s the latest inane proposal: Germany to Electronically Tag All People on Terror Watchlist. 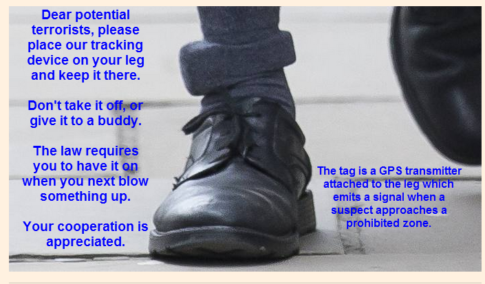 The German government will electronically tag all people on the country’s terror watchlist even if they have committed no crime, reflecting a tougher approach in the wake of December’s terror attack in Berlin.

The measure is one of several proposals agreed by the justice and interior ministries in the weeks after the attack, in which a 24-year-old Tunisian man, Anis Amri, drove a truck into crowds at a Christmas market, killing 12 people and wounding about 50.

It later emerged that Amri, who was killed in a shootout with Italian police a few days after the incident, had been classified by authorities as a potentially dangerous extremist and marked for deportation to Tunisia. But the attempt to send him back failed after the authorities there refused to recognise him as a citizen.

On Wednesday, police in Frankfurt arrested a 36-year-old Tunisian man who was allegedly planning a terror attack in Germany for the militant group Isis.

He was also alleged to have taken part in attacks in Tunisia, including on the Bardo National Museum in Tunis in March 2015 that killed 20 people, and a suspected assault by Isis militants on the town of Ben Guerdane close to Tunisia’s border with Libya in March 2016 in which 13 soldiers and seven civilians died.

Police said the suspect was a recruiter and trafficker for Isis and had built up a support network for the group inside Germany. He had allegedly come to Germany in August 2015 as an asylum seeker, but had previously lived in the country, between 2003 and April 2013.

From September 2016 he had been in custody awaiting extradition, after the Tunisian authorities requested his arrest. But he was released in early November, because the Tunisians had failed to provide the necessary papers to allow him to be sent back. Since then, police said, he had been under round-the-clock observation.

The case closely resembles that of Amri, who could also not be sent back to Tunisia because the authorities there refused to provide the necessary ID papers.

The tagging proposal had been agreed by justice minister Heiko Maas and interior minister Thomas de Maizière last month as part of a package of measures to beef up security.

Amri was eventually killed in a Showdown With Italian Police in Milan.

Amri’s escape to Italy was made easy due to the fact that German Privacy Rules Say “Illegal” to Post Face of Person Being Sought.

By all means, let’s preserve the privacy of terrorists. Instead, let’s tag all the suspects so the real terrorists know whether or not they are suspects.