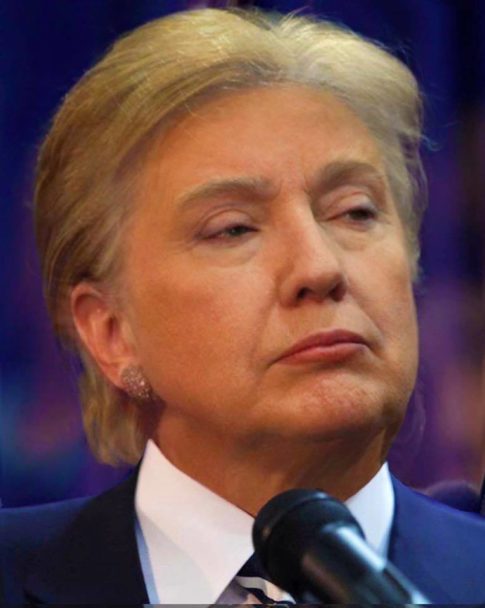 – Trump Is Starting to Sound a Lot Like Hillary Clinton When It Comes to Syria:

The Trump administration has had a very busy first week in office. As one Twitter user eloquently put it:

“First they came for the Latinos, Muslims, women, gays, poor people, intellectuals and scientists and then it was Wednesday.”

Now, it appears President Trump has convinced himself that pursuing one of Hillary Clinton’s most disastrous foreign policy idea is a good idea. In an interview with ABC News published on Thursday, Trump claimed Europe had made a tremendous mistake by admitting millions of refugees from Syria and other Middle Eastern hotspots, stating, “I don’t want that to happen here.”

In order to prevent further refugees from arriving in Western nations, Trump’s proposal is to establish so-called “safe zones” in Syria.

“I’ll absolutely do safe zones in Syria for the people,” he added.

According to a document obtained by Reuters, Trump is expected to order the Pentagon and State Department to craft such a plan.

What we do know is that Trump’s so-called “safe zone” sounds a lot like a “no-fly zone.” This is especially concerning considering Turkey has welcomed Trump’s “safe-zone” proposal and has been the biggest advocate of a no-fly zone in Syria for some time now. A “safe zone” is seen as somewhat meaningless if it does not have a no-fly zone to enforce it, according to Anti-War. This has also been acknowledged by the corporate media. As CNBC notes:

“Creation of safe zones could ratchet up U.S. military involvement in Syria and mark a major departure from Obama’s more cautious approach. Increased U.S. or allied air power would be required if Trump chooses to enforce ‘no fly’ restrictions, and ground forces might also be needed to protect civilians in those areas.”

Further, the U.N. High Commissioner for refugees, Antonio Guterres, already warned Western nations in 2015 that safe zones within Syria cannot be seen as an alternative to accepting people seeking asylum from the Syrian war.

Moreover, a no-fly zone in Syria is a death-trap. As Anti-Media previously reported:

“And it won’t be just a few hundred boots on the ground, either. According to the New York Times, ‘[i]mposing a no-fly zone, [Gen. Martin E. Dempsey] said, would require as many as 70,000 American servicemen to dismantle Syria’s sophisticated antiaircraft system and then impose a 24-hour watch over the country.’

That was General Martin E. Dempsey’s estimation before Russia entered the Syrian theater to defend the Assad regime. The number now might be more like 100,000 American boots on the ground.”

Hillary Clinton was well aware of this fact, as well as the fact that Syria’s air defenses are located in densely populated areas. During his presidential campaign, Donald Trump made it clear he was aware of this horrifying reality, stating that Hillary Clinton’s plan for Syria would “lead to World War III.”

Clearly, Trump doesn’t care about refugees and civilian suffering. The idea that he would set up a zone in Syria that would have the sole purpose of protecting civilians is therefore not rooted in logic and should be approached with absolute caution.

In 2011, NATO said they wanted to establish a no-fly zone in Libya to protect civilians. Instead, they used it to bomb NATO’s water supply. If this occurred before Donald “I will bomb the shit out of them” Trump was commander-in-chief, then any no-fly zone established under his presidency can be expected to be disastrous.