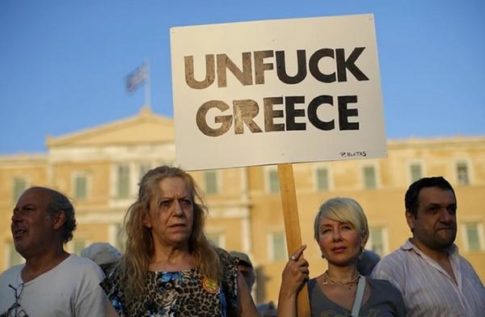 It may – or may not – shock readers to learn that Greece is once again on the verge of collapse.

10-year bond yields shot up and stocks tumbled on Friday, a day after euro zone finance ministers acknowledged the country’s fiscal progress but once again failed to break an impasse with the IMF over the country’s future bailout targets. Early on Friday morning, the greatest Greek nemesis alive, and surely in the afterlife, German Finance Minister Wolfgang Schaeuble said that Greece’s creditors won’t unlock further financial aid to the country unless the government meets its reform promises, which he said it hasn’t done yet.

Two years after its third bailout, Athens and the Troika, or is that Quadriga, i.e., its European and IMF creditors, are still at odds over the fiscal goals Greece can achieve after 2018, when its third rescue programme ends. According to Reuters, the talks have dragged on for months, hindering the conclusion of a bailout review that would help Athens qualify for inclusion in the ECB’s much desied bond-monetization programme and return to bond markets as early as this year.

And, yes, the ongoing disagreements have rekindled fears of a new crisis in Greece, which never really emerged from any of the previous ones, which was forced to sign up to another bailout in July 2015 in order to stay in the euro zone.

Worse, hinting that there may not be a 4th bailout simply because the Greek people will snap by then, the Greek parliament’s budgetary office warned on Friday that “the fiscal cost of the delays may prove bigger than the benefit of a deal”.

Greek 10-year bond yields rose by 21 basis points on Friday, while stocks were 3 percent down. Which means that in the Greek market where an occasional trade takes place once a week, someone sold an oddlot. 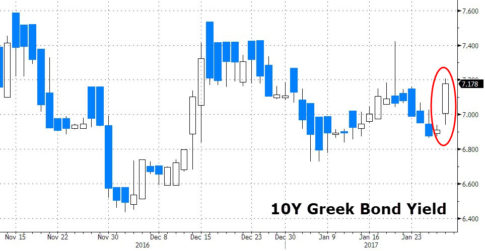 “The outcome was tougher than what the market had hoped for,” Beta Securities analysts Takis Zamanis told Reuters.

There was some good news for Greece, now in its 7th years of economic depression, when European Commission Vice President Valdis Dombrovskis said that Greece outperformed its fiscal targets last year and was on track to meet its 2018 primary surplus target of 3.5 percent of economic output. But he added that more discussions were needed on the fiscal trajectory thereafter and on measures which might be needed and would be implemented only if Greece missed its targets.

In other words, back to square one.

The IMF, which participated in two Greek bailout programmes but is so far only an observer in the current one, says Athens can only achieve a surplus of 1.5 percent of gross domestic product in 2018 unless it adopts more measures now and is granted more debt relief.

The IMF also was the source of bad news, reporting that Greece’s debt is “highly unsustainable” and will reach 275% of GDP – this is after it has been “reprofiled” three times already – by 2060 unless the country’s loans are significantly restructured, according to a draft confidential review of the country’s economy. Without prior bailouts, Greek debt/GDP would be between 400% and 500% as of this moment.

The assessment, prepared ahead of an IMF board meeting on Feb. 6  and seen by The Wall Street Journal, was significantly more pessimistic than that of Greece’s eurozone creditors and underscores the difficulty of the fund moving ahead with a new bailout for Greece in the near future.

Under the draft review, which comes as Athens and its creditors once again failed to find an “austerity” solution, debt is projected to reach around 160% of GDP by 2030 but “become explosive thereafter.” Under the same scenario, debt is seen reaching as much as 275% of GDP in 2060.

The assessment presents a contrast with the eurozone’s own forecasts. An official eurozone analysis in May projected debt-to-GDP of 104.9% in 2060, under a baseline scenario in which Greece fully implements its bailout program. Eurozone governments are resisting the IMF’s push for more debt forgiveness that will come largely at their expense.

“Greece cannot be expected to grow out of its debt problem, even with full implementation of reforms,” the IMF says, adding that the country needs significant debt relief from its European partners to ensure the debt load is sustainable.

The draft review says that measures agreed by the eurozone in May to ease Greece’s debt load need to be further specified, and that “ambitious extensions of grace and maturity periods, a full deferral of interest on European loans, as well as a locking in of the interest rate will be needed” to put debt on a sustainable path.

Meanwhile, “The pressure is on for the Greek government following yesterday’s Eurogroup meeting, since it did not receive substantial support, not even by the supportive EU Commission,” Axia Ventures Group said in a morning note. Greece’s leftist-led government, which is sagging in opinion polls, is refusing to adopt more austerity measures, saying the country is delivering on its bailout promises.

And so, the impasse will go on until Greece either runs out of money again leading to the next social crisis and bailout, or until either China or Russia acquires it in bankruptcy auction, or the Turks invade.