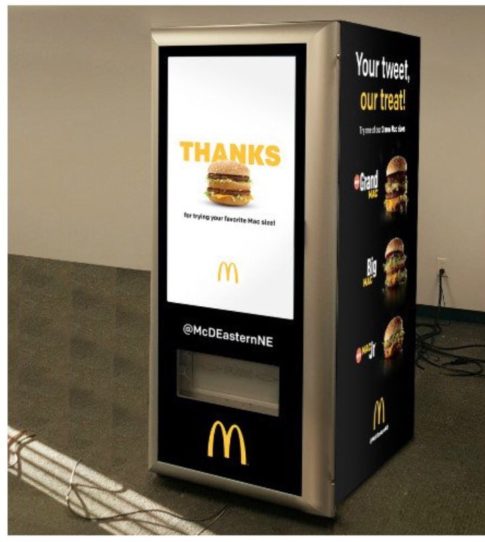 – Dear Bernie, Meet the “Big Mac ATM” That Will Replace All Of Your $15 Per Hour Fast Food Workers:

Dear Bernie, as you continue in your never-ending “Fight for $15“, we thought you might benefit from a simple example of how economics work in a real life, functioning, capitalistic society.  You see, Bernie, labor, much like your daily serving of crunchy granola, is just another “good” that businesses can choose to consume more or less of, depending on price.  And, just to be crystal clear, when the price of labor (i.e. wages) increases, businesses tend to consume less of it.  Finally, our dearest Bernie, when misinformed politicians radically disrupt labor markets by setting artificially high base prices, like your proposed $15 federal minimum wage, then businesses simply stop consuming labor completely and instead replace that labor with this “Big Mac ATM Machine.”

Say what?! A Big Mac ATM machine, where you can order real Big Macs, is coming to the Pru/Copley on January 31st. https://t.co/fjMZcrLpr7pic.twitter.com/MGRxplpsRI

So, you see Bernie, pretty soon all those McDonald’s workers that you promised a “fair living wage” to make Big Macs, will have absolutely no wages at all courtesy of your “Fight for $15.”

Of course, as the Daily Caller points out, the “Big Mac ATM” is just the tip of the iceberg when it comes to low-skilled jobs that will be automated as a result of the $15 minimum wage that has already been passed in several states across the country.

Wendy’s, another popular fast-food establishment, announced plans in May to start installing self-serving kiosks at some of its over 6,000 locations later in the year. The chain is replacing cashiers and other low-skilled jobs with computers and automated machines because, as Wendy’s president Todd Penegor told Investor’s Business Daily, it has to compensate for wage hikes.

McDonald’s Europe president Steve Easterbrook announced in 2011 that the fast-food restaurant was planning on “hiring” 7,000 touch-screen cashiers to be installed across the continent, according to CNET and the Financial Times. Easterbrook said it would make transactions more efficient — namely lowering the average interaction three to four seconds each.

So, congrats on getting all those fast food workers fired, we’re sure they really appreciate all your hard work.