As we previewed and was widely expected, President Trump has just signed 3 executive orders: one officially withdrawing the US from the Trans Pacific Partnership, a second one instituting a federal hiring freeze except for the military, and a 3rd executive order limiting abortion funding overseas.

Pres Trump signs 3 Exec Orders including federal hiring freeze “except for the military” and withdrawing US from Trans-Pacific Partnership. pic.twitter.com/XYxMFi8QDj

“It’s a great thing for the American worker, what we just did,” Trump said on Monday after signing an order withdrawing the U.S. from the Trans-Pacific Partnership accord with 11 other nations. He didn’t sign any actions to direct a renegotiation of the Nafta accord with Mexico and Canada, yet he said on Sunday he would begin talks with the two leaders on modifying the accord, BBG reported. “We’ve been talking about this a long time,” Trump said.

As the AP notes, the move is basically a formality, since the agreement had yet to receive required Senate ratification. Trade experts say that approval was unlikely to happen given voters’ anxiety about trade deals and the potential for job losses.  It remains unclear if Trump would seek individual deals with the 11 other nations in TPP— a group that represents roughly 13.5 percent of the global economy, according to World Bank figures. Trump has blamed past trade deals such as the North American Free Trade Agreement and China’s entrance into the World Trade Organization for a decline in U.S. factory jobs.

Trump’s trade focus fulfills a campaign promise to rewrite America’s trade policy during his first days as president. In declaring his determination to renegotiate Nafta, Trump would rework an agreement that has governed commerce in much of the Western hemisphere for 22 years. By scrapping the Trans-Pacific Partnership accord negotiated by former President Barack Obama, Trump will delight many of his most fervent supporters as well as a good many Democrats, while opening an economic vacuum in Asia that China is eager to fill.

Trump campaigned against the TPP and other trade deals, including Nafta, during his campaign for the White House. In a video released in November, Trump promised to exit TPP “on day one,” calling it “a potential disaster for our country.”

The TPP, a 12-country deal that sought to liberalize trade between the U.S. and Pacific Rim nations including Japan, Mexico and Singapore, was a signature piece of former Obama’s attempt to pivot U.S. global strategy to focus on the fast-growing economies of Asia.

With TPP now history, Trump will next focus on NAFTA.

The president said Sunday that he’ll meet with Canadian Prime Minister Justin Trudeau and Mexican President Enrique Pena Nieto to begin discussing NAFTA, which he has routinely blamed for the loss of U.S. jobs. The newly sworn-in president praised Mexico for being “terrific” and signaled that he’s willing to work with the U.S.’s closest neighbors.

“We’re going to start renegotiating on Nafta, on immigration, and on security at the border,” Trump said at the start of a swearing-in ceremony for top White House staff. “I think we’re going to have a very good result for Mexico, for the United States, for everybody involved. It’s really very important.”

Officials in Canada, which is the biggest buyer of U.S. exports, have indicated they want to avoid getting entangled with the Trump administration’s targeting of imports from Mexico and China. The three countries are the biggest trading partners of the U.S.

David MacNaughton, Canada’s ambassador to the U.S., told reporters his focus is on avoiding Canada being “collateral damage” in trade actions.

We wish David the best of luck, especially since the ball is now entirely in Trump’s court.* * *

President Donald Trump is signing a memorandum that freezes hiring for some federal government workers as a way to reduce payrolls and rein in the size of the federal workforce.

Trump’s directive is fulfilling one of his campaign promises. He tells reporters that members of the military will be exempted from the hiring freeze.

The new president has vowed to take on the federal bureaucracy and the action could be the first step in an attempt to curtail government employment.

The memorandum signed by Trump’s is similar to one that President George W. Bush signed at the start of his administration in 2001.

And a third executive order saw President Donald Trump is reinstating a ban on providing federal money to international groups that perform abortions or provide information on the option.

The regulation has been something of a political football, instituted by Republican administrations and rescinded by Democratic ones since 1984.

Most recently, President Barack Obama ended the ban in 2009.

Trump signed it one day after the Jan. 22 anniversary of the Supreme Court’s 1973 Roe vs. Wade decision that legalized abortion in the United States, the date which is traditionally when presidents take action on the policy.

The policy also prohibits taxpayer funding for groups that lobby to legalize abortion or promote it as a family planning method.

As we laid out before, here is a brief summary of what Trump can (and can not do) on day one. Exhibit 3 lists the President’s “Contract with Voters”, which includes several items that can be accomplished through executive action but involves significant legislative activity as well. 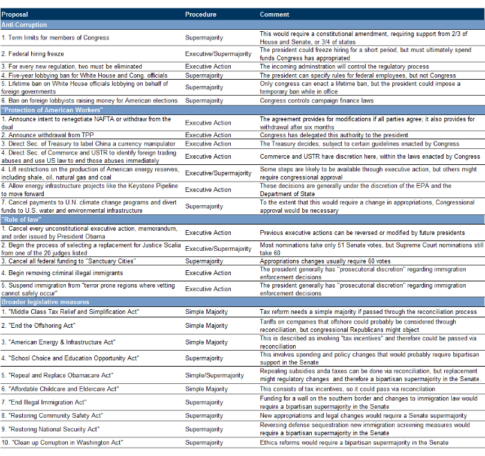