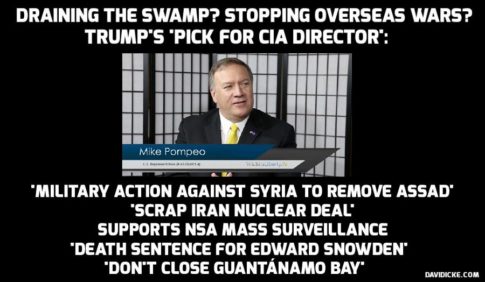 Just a day after President Trump visited Langley, 53-year-old Kansas Rep. Mike Pompeo has been confirmed by the Senate as CIA Director amidst its most contentious relationship with the White House in decades. As voting continued, there were 67 “yes” votes, more than enough to confirm Pompeo, and 30 voted against. Almost all the opposition was from Democrats, but perhaps most notably Rand Paul voted against him.

As The Hill reports, White House press secretary Sean Spicer on Monday downplayed any friction between the CIA and the president.

He called talk of a rift at the agency a “myth” and noted attendees were “hooting and hollering” and gave Trump a standing ovation.

“That doesn’t sound like a huge feud. They were excited. They were clapping. They were cheering when he walked in,” he told reporters. “To see reports that made it sound like there was some fence-mending that needed to happen — that sure didn’t look that way when you walked in.”

But the performance drew fire from the CIA’s outgoing director, John Brennan, who said Trump “should be ashamed of himself.”

But it’s all over for him now, as Pompeo’s most vexing task may involve finding a way to establish a functional relationship between the CIA and President Trump.

As The Washington Post notes,Pompeo, 53, was a prominent member of the tea party in Congress, known for strident political views.

He was a fierce critic of Clinton, a determined opponent of the Obama administration’s nuclear accord with Iran, and said at one point that he regarded the U.S. government’s conduct in the attacks on U.S. compounds in Benghazi, Libya, a political scandal that was “worse in some ways” than Watergate.

But Pompeo has spent the post-election period seeking to reassure CIA officials and members of Congress that he is prepared to put aside that partisan persona and be an honest broker as director of the CIA.

“My job,” Pompeo said during his confirmation hearing, “if confirmed, will be to change roles.”

Pompeo easily surpassed the number of votes required, but most notably Rand Paul voted against him:

Protecting the entire Bill of Rights is one of the main reasons I ran for office. I’ll remain vigilant in that cause https://t.co/JTtXJEhBMP

So far so good for Trump’s nominations, but there is a long way to go… 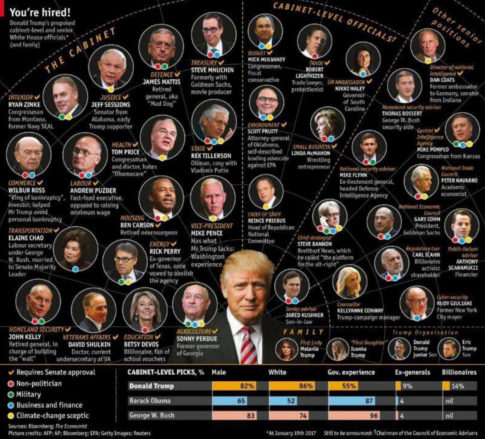 7 thoughts on “Mike Pompeo Is Confirmed To Lead CIA”