– Doomsday Bunkers Of The Rich & Famous: “You Need So Many Things To Ride Out The Apocalypse”:

It used to be that the term “doomsday prepper” evoked a certain visual of an ultra-conservative, bearded woodsman with slightly less than stellar hygiene practices living in the middle of no where with an arsenal of weaponry and a sufficient hoard of dried and canned food to live for years.  But recently that all seems to be changing.  And whether the election of Trump was the catalyst that drove the world’s rich to start prepping or simply allowed them to open up about being preppers all along, one thing is certain, “prepping” is growing in popularity among America’s billionaires.

In the latest issue of The New Yorker, Evan Osnos takes a look at some of the super-rich that are taking extreme measures to prepare for the apocalypse.  One such wealthy prepper is Silicon Valley’s Reddit CEO, Steve Huffman, who admits that he went so far as to get corrective eye surgery, not for convenience or appearance, but bacause “If the world ends…getting contacts or glasses is going to be a huge pain in the ass…without them, I’m fucked.”

Steve Huffman, the thirty-three-year-old co-founder and C.E.O. of Reddit, which is valued at six hundred million dollars, was nearsighted until November, 2015, when he arranged to have laser eye surgery. He underwent the procedure not for the sake of convenience or appearance but, rather, for a reason he doesn’t usually talk much about: he hopes that it will improve his odds of surviving a disaster, whether natural or man-made. “If the world ends—and not even if the world ends, but if we have trouble—getting contacts or glasses is going to be a huge pain in the ass,” he told me recently. “Without them, I’m fucked.”

Huffman, who lives in San Francisco, has large blue eyes, thick, sandy hair, and an air of restless curiosity; at the University of Virginia, he was a competitive ballroom dancer, who hacked his roommate’s Web site as a prank. He is less focussed on a specific threat—a quake on the San Andreas, a pandemic, a dirty bomb—than he is on the aftermath, “the temporary collapse of our government and structures,” as he puts it. “I own a couple of motorcycles. I have a bunch of guns and ammo. Food. I figure that, with that, I can hole up in my house for some amount of time.” 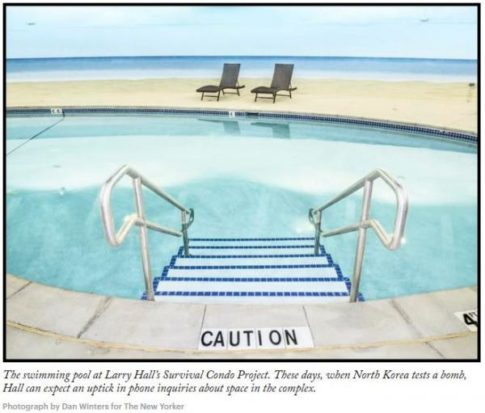 Meanwhile, Antonio García Martínez, a forty-year-old former Facebook executive, decided to buy his own little section of a secluded island in the Pacific Northwest and load it up with generators, solar panels, and thousands of rounds of ammunition.

Last spring, as the Presidential campaign exposed increasingly toxic divisions in America, Antonio García Martínez, a forty-year-old former Facebook product manager living in San Francisco, bought five wooded acres on an island in the Pacific Northwest and brought in generators, solar panels, and thousands of rounds of ammunition. “When society loses a healthy founding myth, it descends into chaos,” he told me. The author of “Chaos Monkeys,” an acerbic Silicon Valley memoir, García Martínez wanted a refuge that would be far from cities but not entirely isolated. “All these dudes think that one guy alone could somehow withstand the roving mob,” he said. “No, you’re going to need to form a local militia. You just need so many things to actually ride out the apocalypse.” Once he started telling peers in the Bay Area about his “little island project,” they came “out of the woodwork” to describe their own preparations, he said. “I think people who are particularly attuned to the levers by which society actually works understand that we are skating on really thin cultural ice right now.”

In private Facebook groups, wealthy survivalists swap tips on gas masks, bunkers, and locations safe from the effects of climate change. One member, the head of an investment firm, told me, “I keep a helicopter gassed up all the time, and I have an underground bunker with an air-filtration system.” He said that his preparations probably put him at the “extreme” end among his peers. But he added, “A lot of my friends do the guns and the motorcycles and the gold coins. That’s not too rare anymore.” 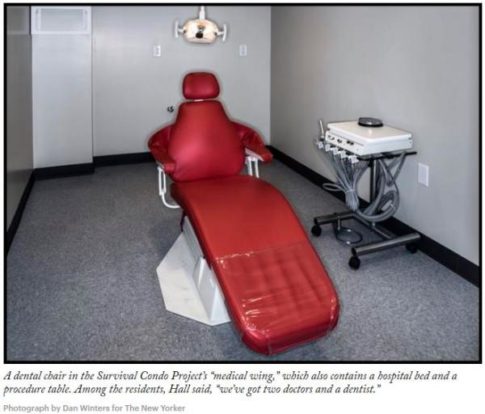 But the award for best wealthy prepper goes to Larry Hall, CEO of the Survival Condo Project, who turned a decommissioned, 15-story nuclear warhead silo into an underground fortress and sold off individual condos to America’s rich and famous.

He ushered me through, and, in the darkness, I could see the outline of a vast concrete dome, with a metal blast door partly ajar. I was greeted by Larry Hall, the C.E.O. of the Survival Condo Project, a fifteen-story luxury apartment complex built in an underground Atlas missile silo. The facility housed a nuclear warhead from 1961 to 1965, when it was decommissioned. At a site conceived for the Soviet nuclear threat, Hall has erected a defense against the fears of a new era. “It’s true relaxation for the ultra-wealthy,” he said. “They can come out here, they know there are armed guards outside. The kids can run around.”

Hall got the idea for the project about a decade ago, when he read that the federal government was reinvesting in catastrophe planning, which had languished after the Cold War. During the September 11th attacks, the Bush Administration activated a “continuity of government” plan, transporting selected federal workers by helicopter and bus to fortified locations, but, after years of disuse, computers and other equipment in the bunkers were out of date. Bush ordered a renewed focus on continuity plans, and FEMA launched annual government-wide exercises. (The most recent, Eagle Horizon, in 2015, simulated hurricanes, improvised nuclear devices, earthquakes, and cyberattacks.)

“I started saying, ‘Well, wait a minute, what does the government know that we don’t know?’ ” Hall said. In 2008, he paid three hundred thousand dollars for the silo and finished construction in December, 2012, at a cost of nearly twenty million dollars. He created twelve private apartments: full-floor units were advertised at three million dollars; a half-floor was half the price. He has sold every unit, except one for himself, he said. 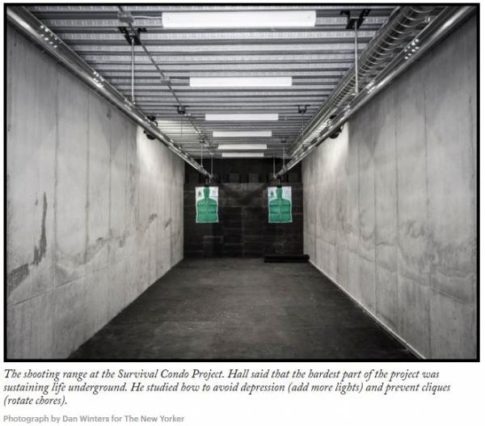 That said, for some folks a decommissioned nuclear missile silo in the middle of Kansas isn’t nearly remote enough if the shit truly hits the fan.  As such, a record number of Americans, 13,401 in the 7 days after Trump’s election to be precise (17x the normal volume), have started the process necessary to take up residency in New Zealand.

If a silo in Kansas is not remote or private enough, there is another option. In the first seven days after Donald Trump’s election, 13,401 Americans registered with New Zealand’s immigration authorities, the first official step toward seeking residency—more than seventeen times the usual rate. The New Zealand Herald reported the surge beneath the headline “Trump Apocalypse.”

In fact, the influx had begun well before Trump’s victory. In the first ten months of 2016, foreigners bought nearly fourteen hundred square miles of land in New Zealand, more than quadruple what they bought in the same period the previous year, according to the government. American buyers were second only to Australians. The U.S. government does not keep a tally of Americans who own second or third homes overseas. Much as Switzerland once drew Americans with the promise of secrecy, and Uruguay tempted them with private banks, New Zealand offers security and distance. In the past six years, nearly a thousand foreigners have acquired residency there under programs that mandate certain types of investment of at least a million dollars.

Jack Matthews, an American who is the chairman of MediaWorks, a large New Zealand broadcaster, told me, “I think, in the back of people’s minds, frankly, is that, if the world really goes to shit, New Zealand is a First World country, completely self-sufficient, if necessary—energy, water, food. Life would deteriorate, but it would not collapse.” As someone who views American politics from a distance, he said, “The difference between New Zealand and the U.S., to a large extent, is that people who disagree with each other can still talk to each other about it here. It’s a tiny little place, and there’s no anonymity. People have to actually have a degree of civility.”

The growing foreign appetite for New Zealand property has generated a backlash. The Campaign Against Foreign Control of Aotearoa—the Maori name for New Zealand—opposes sales to foreigners. In particular, the attention of American survivalists has generated resentment. In a discussion about New Zealand on the Modern Survivalist, a prepper Web site, a commentator wrote, “Yanks, get this in your heads. Aotearoa NZ is not your little last resort safe haven.”

Certainly, we wish all the new liberal, Silicon Valley preppers the best of luck in surviving Trump rule.  Alas, if everything turns out ok, and all your preparations were for nothing, we’re sure you’ll be to sell your underground fortresses to conservative billionaires when Bernie or Elizabeth Warren take the White House in 4-8 years.

1 thought on “Doomsday Bunkers Of The Rich & Famous: “You Need So Many Things To Ride Out The Apocalypse””