– In Stunning Admission, Draghi Says A Country Can Leave Eurozone But Must “Settle Bill First”:

Less than 4 years ago, and shortly after his infamous “whatever it takes” threat to speculators, Mario Draghi responded to a question from Zero Hedge readers, saying “there is no Plan B” when it comes to contingency plans for a Eurozone nation leaving the monetary union. The reasoning was simple: the mere contemplation of such a scenario assigned a probability to its occurrence, which is why the ECB was desperate to give the impression that no matter what, Europe’s cohesion is unbreakable.

Fast forward four years later, when not only has this particular strategy been thoroughly rejected, but for the first time ever the head of the ECB provided a framework, vague as it may be, laying out what a Eurozone exit would look like.

In a letter to two Italian lawmakers in the European Parliament released on Friday, and first reported by Reuters, Mario Draghi implied that a country could leave the euro zone – so much for “No Plan B” –  but first it would need to settle or debts with the bloc’s TARGET2 payments system before severing ties.

“If a country were to leave the Eurosystem, its national central bank’s claims on or liabilities to the ECB would need to be settled in full,” Draghi said in the letter. He did not specify in what currency the “settlement” would have to take place. It was also not clear just what the ECB would do in response if a country did not “settle its claims in full”: at last check the ECB did not have a policy-enforcing army.

As Reuters confirms, the comment by Draghi is “a rare reference by Draghi to the possibility of the currency zone losing members.” We would say not just “reference” but admission that a Italexit is all too possible, however the only way the ECB would allow it, would be for Italy first to pay its €357 billion TARGET2 bill (which various confused and clueless tenured economists over the past five years claimed would never be used by the ECB as a bargaining chip in “exit” negotiations and has no political implications; oops).

To be sure, the beneficiary of such a transfer payment would be the country most reliant on the perpetuation of the status quo: Germany, which has some €754 billion in Target2 “assets” which could be nullified should one or more Eurozone countries exit without satisfying their payment obligations.

In the letter, Draghi reiterated that the imbalances were due to the ECB’s own bond buying-program, where many of the sellers are foreign investors with accounts in Germany, and ensuing portfolio rebalancing.

Draghi’s admission that “QuItaly” or UscIta as it is known domestically – is an all too real possibility coincides with a groundswell of anti-euro sentiment in Italy and other euro zone states, fueled in part by last June’s unprecedented decision by Britain to leave the European Union.

The threat of defaults on cross-border debts has often been credited as one element keeping the euro zone together throughout the financial crisis. As these payments are not generally settled, weaker economies including Italy, Spain and Greece have accumulated huge liabilities towards Target 2 while Germany stands out as the biggest creditor with net claims of 754.1 billion euros.

Target 2 imbalances have worsened in recent months, with Harvard economist Carmen Reinhart warning of capital flight from Italy. This can be seen in the chart below, which confirms that below the calm surface portrayed by low – if recently rising – Italian bond yields, tremendous capital imbalances are piling up. 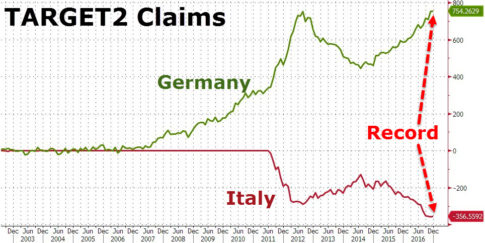 Draghi’s admission, which is meant as a quasi-threat to Italy, may have opened up a whole new can of worms for European stability in addition to concerns about Trump, because not only has Draghi confirmed that an exit from the Eurozone has been explicitly modeled by the central bank, but also lays out the conditions under which it would be considered and permitted.

More importantly, it also once again provides the basis for an aggressive “negotiation”, potentially escalating to rancorous bargaining between Italy and Germany, as suddenly the ECB has made it clear that Italy’s gain in a “hypothetical” Euro zone exit would be a tremendous loss for Berlin and Merkel. We are confident that the question of “how much” preventing such a loss would be worth to Merkel, will emerge in very short order. As for what Draghi’s statement means for countries with a far smaller Target2 liability which may also consider exiting the monetary union, the answer is two words: “green light.”