Hundreds of thousands crowds of women, many wearing bright pink knit hats and carrying Starbucks lattes, swamped into downtown Washington, arriving by bus, train and car on Saturday for a march in opposition to U.S. President Donald Trump one day after the Republican took office. 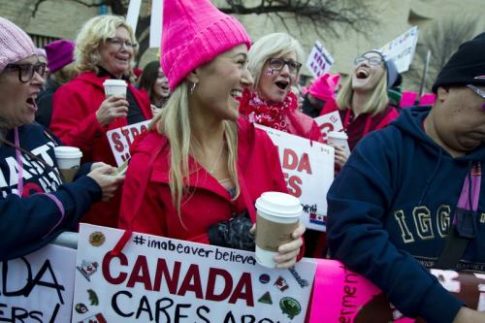 Cited by AP, a city official in Washington said the turnout estimate for the Women’s March on the National Mall now stands at 500,000 people, more than double the initial predictions. Kevin Donahue is Washington’s deputy mayor for public safety and justice. He says on Twitter that organizers of the march are increasing the turnout estimate to half a million.

The Washington event is expected to be the largest of a series of marches planned across the world in cities including Sydney, London, Tokyo and New York to criticize Trump’s “often angry, populist rhetoric.”

A hundred thousand people marching for equality – amazing to speak at @womensmarchlon in Trafalgar Square this afternoon #WomensMarch pic.twitter.com/EQclgnsnXO

It’s not normal to see a massive protest outside the Capitol the day after somebody takes office. pic.twitter.com/na491qB3Xy

Today’s Women’s March on Washington, which will feature speakers, celebrity appearances and a protest walk along the National Mall, is the brainchild of Hawaiian grandmother Teresa Shook and is intended as an outlet for women and their male supporters to vent their frustration and anxiety over Trump’s victory. According to organizers, several hundred thousand people are expected to attend.

Let’s March Nasty Women. Shady Grove metro stop. We are not even near the city yet! #WomensMarch #nastywomen pic.twitter.com/3yJjWGEJNO

It’s finally here! Check out our March Map and remember to print it out and save it to your phone. #WomensMarch pic.twitter.com/LwMNx674ss

Many participants wore knitted pink cat-eared “pussy” hats, a reference to Trump’s claim in the 2005 video that was made public weeks before the election that he grabbed women by the genitals. The march spotlights the fierce opposition Trump faces as he takes office, a period that is typically more of a honeymoon for a new president. The women said they hoped to send a unity message to Trump.

Among the prominent democrats praising the rally were Bernie Sanders and Hillary Clinton. The former secretary of state thanked attendees on Twitter for “standing, speaking and marching for our values.” She says it’s as “important as ever.” Clinton is also reviving her campaign slogan and says in the tweet she believes “we’re always Stronger Together.”

Congratulations to the women marching today. We must go forward to ensure full reproductive justice for all women. #WomensMarch

Actress America Ferrera said “every single one of us” is under attack by President Donald Trump. Ferrera was speaking at the start of a rally that is opening the Women’s March on Washington. She says people are gathered in the capital and across the country to say to Trump, “We refuse.” The “Ugly Betty” star says the marchers reject demonization of Muslims. She says they also refuse to give up their “right to safe and legal abortions.” Ferrera says the U.S. won’t ask LGBT Americans to go backward and won’t go from a nation of immigrants to “a nation of ignorance.”

At the same time, thousands of women took to the streets of European capitals to join “sister marches” in Asia against Trump ahead pf the Washington rally. Waving banners with slogans like “Special relationship, just say no” and “Nasty women unite,” the demonstrators gathered outside the American embassy in Grosvenor Square before heading to a rally in central Trafalgar Square.

The #WomensMarch in England, France, Australia, and Germany today ???????? pic.twitter.com/UhhxK0lUks

Worldwide some 670 marches were planned, according to the organizers’ website which says more than two million marchers are expected to protest against Trump, who was sworn in as the 45th U.S. president on Friday.

As Reuters notes, Trump has “angered many liberal Americans with comments seen as demeaning to women, Mexicans and Muslims, and worried some abroad with his inaugural vow on Friday to put “America First” in his decision making.” The protests come a day after the nation’s capital was rocked by violent protests against the new president, with black-clad anti-establishment activists smashing windows, setting vehicles on fire and fighting with riot police who responded with stun grenades.

The protests illustrated the depth of the anger in a deeply divided country that is still recovering from the scarring 2016 campaign season. Trump defeated Democrat Hillary Clinton, the first woman nominated for president by a major U.S. party.

“It’s important that our rights be respected. People have fought hard for our rights and President Trump has made it clear that he does not respect of them,” said Lexi Milani, a 41-year-old restaurant owner from Baltimore, who had ridden down in a bus with 28 friends.

Washington subway trains and platforms were packed with people. The Metro sent a service alert warning of “system-wide delays due to extremely large crowds.” At least one station was closed to new passengers because of the crowds backed up on the platform.

As Reuters adds, some Republicans have criticized feminist, gay-rights and other activist groups critical of Trump as resorting to a divisive style of “identity politics.” Democratic U.S. Representative Jim Himes of Connecticut, a supporter of the marchers, rejected that assertion.

The women have given various reasons for marching, ranging from inspiring other women to run for office to protesting Trump’s plans to repeal the 2010 Affordable Care Act, which among other things requires health insurers to cover birth control. Jesse Carlock, 68, a psychologist from Dayton, Ohio was attending her first protest in decades. “Once Mr. Trump was elected, I decided I needed to get active again, and I hadn’t been since the 60s and 70s,” Carlock said. “I’ve got to stand up and be counted as against a lot of what President Trump is saying…about healthcare, immigration, reproductive rights, you name it.”

Celebrities such as the musicians Janelle Monae and Katy Perry – both of whom supported Clinton in the election – are expected to take part in Saturday’s march. The march organizers said they had extensive security plans in place, and would have both visible and hard-to-spot security workers along the route.

Trump’s team did not respond to a request for comment about the march.