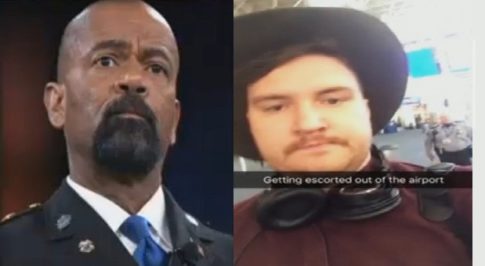 – Wisconsin Sheriff David Clarke Detains Man for Looking at Him the Wrong Way on Airplane:

Milwaukee County Sheriff David Clarke had a man detained for looking at him the wrong way on an airplane Sunday.  Or for mocking him over a football game.

Or, if you believe the sheriff, for making him fear for his life.

“Next time he or anyone else pulls this stunt on a plane they may get knocked out,” the sheriff said in a statement. “I do not have to wait for some goof to assault me.”

Either way, Dan Black, 24, has filed an internal affairs complaint against the sheriff.

Black said the incident took place as he boarded a plane in Dallas to Milwaukee and spotted the sheriff sitting in first class decked out in Dallas Cowboy attire, according to WISN. Law enforcement sources told the news station that they were told to detain Black because he had mocked the sheriff.

The Cowboys had just lost a playoff game against the Green Bay Packers and Black was surprised that the Wisconsin sheriff was a Cowboys fan.

So Black asked the sheriff if he was the famous David Clarke. Sheriff Clarke responded with a yes.

Black, apparently frustrated that a Milwaukee resident was cheering for the Cowboys instead of the local Packers, shook his head in disapproval as he walked pass the sheriff on the plane.

He also said he is not a fan of the sheriff anyway, who made headlines as one of the few black Americans that spoke at the 2016 Republican National Convention in support of Donald Trump

Black continued walking down the aisle to his seat in commercial class when the sheriff asked, “Is there a problem?”. Black said no, shook his head, and continued to walk away.

But the sheriff was infuriated that someone had the audacity to shake their head at him, so he had his deputies meet Black at the terminal after the plane landed in Milwaukee.

When Black stepped off the plane, he was met by Sheriff Clarke and six sheriffs deputies with police dogs. The deputies detained Black and ordered him to a private security room in the airport where they questioned him.

“I come out, and there’s about six cops, Sheriff Clarke, and two dogs all standing there staring at me,” Black told WISN.

“Some of the cops came up to me, and I immediately know, here we go. The whole thing was so bizarre, I couldn’t believe it at first.

“They asked who I am, what I was doing in Dallas, what are my views on Sheriff Clarke.”

The deputies were told that Black made offensive remarks to Sheriff Clarke, although they never gave clarification on what the actual remarks were. According to Black, even the deputies admitted that the detainment was stupid and ridiculous.

After realizing that Black did not violate any laws, the deputies escorted Black to his waiting ride after detaining him for 15 minutes. Black believes he was a victim of Sheriff Clark’s abuse of power.