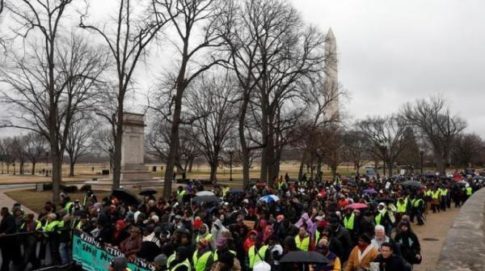 – Washington D.C. Turned Into “Virtual Fortress” As 250,000 Protesters Descend Upon The City:

Over the past couple of days, we’ve highlighted a couple of the mass protests that are being planned by disaffected Hillary supporters in an effort to disrupt the various Trump inaugural events that get kicked off tomorrow evening.  Perhaps the most aggressive “disruptions” have been planned by groups called “DisruptJ20” and the “DC Anti-Fascist Coalition” and include plans to “paralyze the city” with “clusterfuck blockades” of bridges and tunnels, “stink bombs” in ventilation systems and chaining metro trains to station platforms to shut down rail traffic.  Unfortunately for them, all of their plans were caught on tape by Project Veritas (see “New Video Exposes Anti-Trump Groups Plotting Criminal Acts To Disrupt Inauguration“) so we suspect police will be well prepared.

As Reuters points out this morning, efforts to disrupt the inaugural process will have to evade a massive force of 28,000 security personnel and miles of fencing and roadblocks fortified by sand-laden dump trucks and other heavy equipment.

Washington will turn into a virtual fortress ahead of Donald Trump’s presidential inauguration on Friday, as the U.S. capital braces for more than a quarter-million protesters expected during the Republican’s swearing-in.

About 28,000 security personnel, miles (kilometers) of fencing, roadblocks, street barricades and dump trucks laden with sand will be part of the security cordon clamped around 3 square miles (almost 8 square km) of central Washington.

“If we do have a mass arrest, we’ll be able to get people processed very quickly,” he said in an interview with Washington’s NBC 4 television station.

And, if America’s millennial snowflakes are able to break through rhe police fortress they will undoubtedly be met by the “Wall of Meat“ recently promised by the “Bikers for Trump” group which has vowed to go “toe-to-toe with anyone that is going to break through any police barriers.”

Overall, the inauguration is expected to draw a crowd of 900,000 with 250,000 of those guests showing up to protest the new President-elect.

Police have forecast that some 900,000 people, both supporters and opponents, will flood Washington for the inauguration ceremony, which includes the swearing-in on the steps of the U.S. Capitol and a parade to the White House along streets thronged with onlookers.

About 30 groups that organizers claim will draw about 270,000 protesters or Trump backers have received permits for rallies or marches before, during and after the swearing-in. More protests are expected without permits.

By far the biggest protest will be the Women’s March on Washington on Saturday, which organizers expect to draw 250,000 people.

Luckily, at least one helpful protest group will be on hand with plans to calm down the rowdy masses by passing out 4,200 doobies.

One Washington inaugural protest will come amid a haze of pot smoke as pro-marijuana protesters show their opposition to Trump’s choice for attorney general, Alabama Republican Senator Jeff Sessions, a critic of pot legalization.

The group plans to distribute 4,200 joints at the inauguration and urge attendees to light up. Possession of small amounts of marijuana is legal in Washington, but public consumption is not.

As we’ve said before, we wish all the protesters the best of luck…we’re sure your dreams of disrupting the democratic process will be well rewarded with a free night’s stay at a local DC jail.

1 thought on “Washington D.C. Turned Into “Virtual Fortress” As 250,000 Protesters Descend Upon The City”