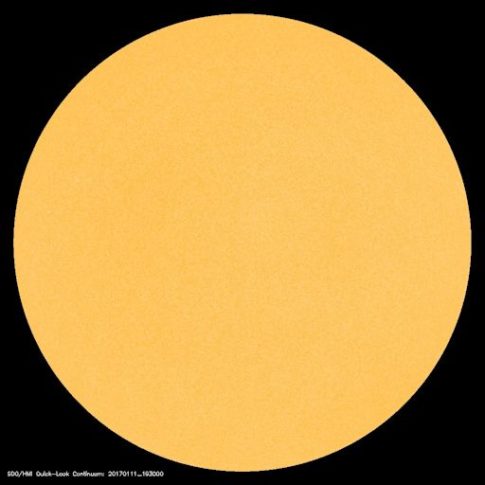 So far in 2017, the big story in space weather is sunspots–or rather, the lack thereof. The sun has been blank more than 90% of the time.  Only one very tiny spot observed for a few hours on Jan. 3rd interrupted a string of spotless days from New Years through Jan.11th. Devoid of dark cores, yesterday’s sun is typical of the year so far:

The last time the sun produced a similar string of spotless days was May of 2010, almost 7 years ago. That was near the end of the previous deep Solar Minimum.  The current stretch is a sign that Solar Minimum is coming again. Sunspot numbers rise and fall with an ~11-year period, slowly oscillating between Solar Max and Solar Min. In 2017, the pendulum is swinging toward the bottom.

Contrary to popular belief, space weather does not stop when sunspots vanish.  Recent nights are proof: Bright auroras have been dancing around the Arctic Circle. Tom Arne Moldenaes of Norway,Groetfjord, recorded this eruption (“like green lava from a volcano,” he says) on Jan. 5th when the face of the sun was completely spotless: 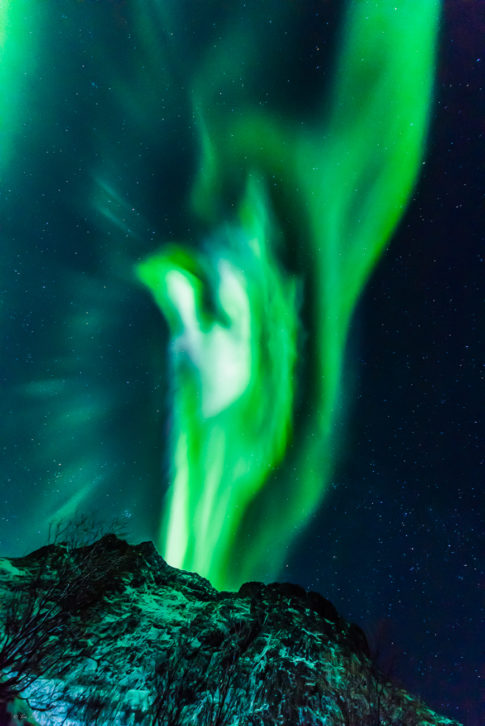 The auroras were sparked by a stream of solar wind flowing from a large hole in the sun’s atmosphere. Such “coronal holes” are common during Solar Minimum.

A lot of interesting things happen when sunspots vanish. For instance, the extreme ultraviolet output of the sun plummets. This causes the upper atmosphere of Earth to cool and collapse. With less air “up there” to cause orbital decay, space junk accumulates around our planet.

Stay tuned for updates as we enter a new phase of the solar cycle.