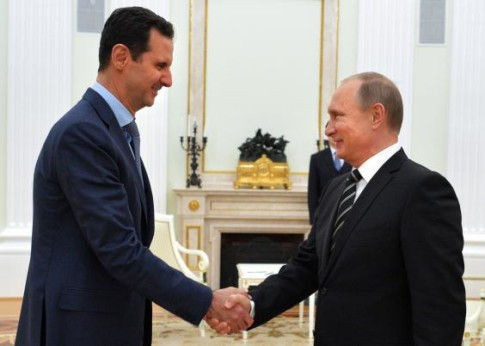 – Putin: ‘Will We Help Syria? We Will’ – ‘I Do Not Want To Think That Any Other Country Will Be Subjected To Any External Aggression’

Waiting for the response.

Just as the Syrian proxy war showed some hopeful signs of finally dying down, the Syrian army command said on Friday that Israeli jets have bombed the Mezzeh military airport west of Damascus, accusing Tel Aviv of supporting terrorism, and warned Tel Aviv of repercussions of what it called a “flagrant” attack. Syrian state TV quoted the army as saying several rockets were fired from an area near Lake Tiberias in northern Israel just after midnight which landed in the compound of the airport, a major facility for elite Republican Guards and special forces. The airport was rocked by multiple explosions, some of which were captured by social media.

“Syrian army command and armed forces warn Israel of the repercussions of the flagrant attack and stresses its continued fight against (this) terrorism and amputate the arms of the perpetrators,” the army command said in a statement.

The statement did not disclose if there were any casualties, but said the rockets caused a fire. Earlier, state television said several major explosions hit Mezzeh military airport compound near Damascus and ambulances were rushed to the area, without giving details.

The airport southwest of the capital is a major strategic air base used mainly by Syrian elite Republican Guards and had been a base used to fire rockets at former rebel-held areas in the suburbs of Damascus. State television did not give any further details.

Footage from the scene with heavy fire and the sounds of explosions has surfaced on social media. Multiple reports from journalists and activists on the ground described the bombing, with the opposition also reporting there were rockets fired.

In the past, Israel has targeted positions of Lebanon’s Hezbollah group inside Syria where the Iranian-backed group is heavily involved in fighting alongside the Syrian army. According to Israeli breaking, the airport was bombed because it was a “suspected holding ammunition depots for Hezbollah. ”

Israeli defence officials have voiced concern that Hizbollah’s experience in the Syrian civil war, where it has played a significant role and recently helped the Syrian army regain the eastern sector of the city of Aleppo, has strengthened it.

The airstrike in almazah military airport short time ago pic.twitter.com/z9qaPUpwbX

Rebels operating in the area have said Hizbollah’s major arms supply route into Damascus from the Lebanese border has been targeted on several occasions in recent years by air strikes. This has included strikes on convoys of weapons and warehouses.

This is the second time in two months the Israeli Defense Forces have being accused by Syria of targeting Syrian positions from Israeli territory.  On December 7, SANA reported that “several surface-to-surface missiles” were launched by the IDF from the Golan Heights. At the time, the source in the Syrian armed forces slammed the attack as a “desperate attempt” by Israel to endorse terrorists.

Rebels operating in the area have said Hezbollah’s major arms supply route into Damascus from the Lebanese border has been targeted on several occasions in recent years by air strikes. This has included strikes on convoys of weapons and warehouses. Damascus airport was also hit by air strikes in 2013. Tel Aviv neither confirms nor denies involvement in striking targets inside Syria. Damascus has also been tightlipped about previous strikes.