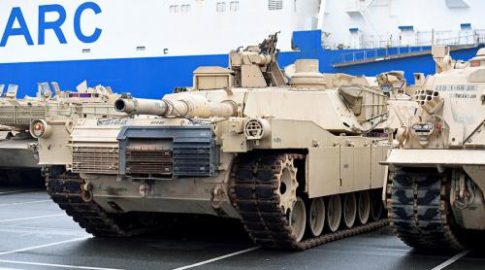 U.S. tanks, trucks and other military equipment is are unloaded in the harbour of
Bremerhaven, Germany, January 8, 2017

– Thousands Of US Troops Arrive In Europe In “One Of Largest Deployments Since The Cold War”:

Just days after we reported that the US had begun deploying some 2,800 tanks, trucks and other military equipment to Germany, from where they would be transported by rail and road to Eastern Europe as part of a buildup of NATO reinforcements against “Russian expansion”, the next US deployment has made its way to Europe over the weekend, when some 4,000 US troops arrived in the German port of Bremerheven, on their way to Wroclaw, Poland under a planned NATO operation to “reassure the alliance’s Eastern European allies” in the face of what NATO has dubbed mounting Russian aggression.

The American soldiers landed in Wroclaw, home to a key Nato and Polish air base in south-west Poland. The troops will be followed by the roughly 2,800 tanks and other pieces of military equipment which are currently en route from Germany.

The delivery of US Abrams tanks, Paladin artillery, and Bradley fighting vehicles, as well as supporting troops, marks a new phase of America’s continuous presence in Europe, which will now be based on a nine-month rotation.

Why provoke Russia with yet another mass deployment?  Because as NATO Major General Timothy McGuire told reporters, last week, when asked if the large deployment was meant to send a message to Russia, “The best way to maintain the peace is through preparation.”  And while we are quoting, here is another good line from the movie Spice Like Us: “A weapon unused is a useless weapon.” The US military industrial complex is doing everything in its power to make sure a lot of weapons are used in the future.

As reported previously, NATO’s latest deployment along Russia’s western border falls under Operation Atlantic Resolve, a mission designed to demonstrate to Moscow Washington’s commitment to defend allies in Europe. Atlantic Resolve was launched in the immediate aftermath of the Ukraine proxy war and the partition of the Ukraine, which sparked fears in the Baltic nations that Vladimir Putin was planning a similar land-grab there.

The Polish embassy in Washington said the troops in Wroclaw were the first to arrive in Poland as part of Atlantic Resolve. As the Independent dubs the US reinforcement, the deployment has been described as “one of the largest movements of US troops to Europe since the Cold War.”

Quoted by Reuters, Lt Gen Tim Ray, deputy commander of US European Command, said: “Let me be very clear, this is one part of our efforts to deter Russian aggression, ensure territorial integrity of our allies and maintain a Europe that is whole, free, prosperous and at peace.”

Instead, what the deployment will do is bring the continent that much closer to a new cold, if not conventional, war.

The US troops are expected to be stationed at two training sites in western Poland in the short term before they are sent to sites at six other countries across the region.

In another faux-pacifist justification, Maj Gen Timothy McGuire, deputy commanding general of the US Army Europe, said that, “this is a tangible sign of the United States’ commitment to maintaining peace on this continent. “It is a sign of the US commitment to this alliance and to peace and prosperity in Europe.” Meanwhile, Russia has already deploy nuclear-capable ballistic missiles to Kaliningrad in response to this latest NATO build-up, from where it has a bird’s eye view of most of central Europe. It has warned further deployment would lead to even more nukes.

The US Army said the process of deploying to Europe was part of the training and tested how American forces would be sent at short notice to counter Russia in the event of an outbreak of war. Troops will be on rotation in Poland and beyond for between four and six months and will work alongside local units.

The massive deployment means that the arrival of the 3rd Armoured Brigade Combat Team, 4th Infantry Division, will see the start of a continuous presence and back-to-back rotations of US troops and equipment in the region. Among the deployments to Romania and Bulgaria will be the 1st Battalion, 8th Infantry Regiment – dubbed the ‘Iron Knights’ and the oldest armoured unit in the US Army. The US is also increasing its presence in the Black Sea and in Western Europe at bases in the Netherlands, Belgium and Germany.

Russia blames the West for worsening relations and says the build-up of Nato troops in the Baltics is a provocation. Expect more complaints from the Kremlin: around 4,000 Nato troops are set be posted to Poland, Lithuania, Estonia and Latvia in the coming months.

In addition, Britain will send an 800-strong battalion to Estonia, supported by French and Danish troops, beginning in May. The deployment was criticised as “truly aggressive” by Moscow.

Meanwhile, an odd voice of reason when it comes to potential European war has emerged out of German politicians, who have raised concern about the thousands of NATO troops and equipment, along with hundreds of tanks, that have been sent to Poland and countries bordering Russia in what has been touted by Washington as “defense against Russian aggression.”

“It does not help us if tanks will be going up and down on both sides of the border,” Brandenburg’s leader and SPD party member, Dietmar Woidke, told RBB. “I hope everyone will keep calm. I believe that despite all the difficulties, we should seek dialogue with Russia,” he added on Thursday, warning that relations with Moscow could worsen even further.

NATO’s buildup in Europe also came under fire from Germany’s Die Linke party. “Tanks do not create peace, anywhere,” Christian Görke stressed in a statement, RBB reported. Tobias Pflueger of Die Linke slammed the stationing of US tanks and military equipment in Poland, saying this will trigger an arms race and lead to an “escalation in relations with Russia,” Focus Online reported.

Crowds of people marched through Bremerhaven on Saturday to protest the deployment and transport of NATO troops and weapons through the city, RT reported. Hundreds of American tanks, trucks, and other military equipment bound for Poland, said to be the largest arms shipment since the fall of the Soviet Union, arrived at the German port on Friday to be transferred to Eastern Europe. The protesters marched through the city holding signs and banners reading, “No NATO deployments! End the militaristic march against Russia!” and “Out of NATO.”

“There is, starting from Washington DC, a major push to do everything possible in the next two weeks to create unending hostility between the West and Russia that can’t be undone by Donald Trump or anyone else. Even at the risk of open violence, rather than simply Cold War hostility. This is highly preferable to weapons profiteers as against actual peace breaking out, which is their greatest fear,” author and journalist David Swanson told RT on Monday.

“It is clearly an escalation that involves numerous facets including propaganda about Russian crimes in the US media; that includes shipping troops and equipment to the border; that includes expanding NATO and pushing hard on other NATO members to join in this escalation where you have serious protests in Germany by those who want peace [and are] against sending Germans or Americans from Germany eastward, as they should. There are not enough of us in the US similarly protesting,” he added.

Naturally, anyone who shares Swanson’s view will be dubbed a purveyor of “fake news” and promptly deported to Russia on allegations of being a Russian spy.